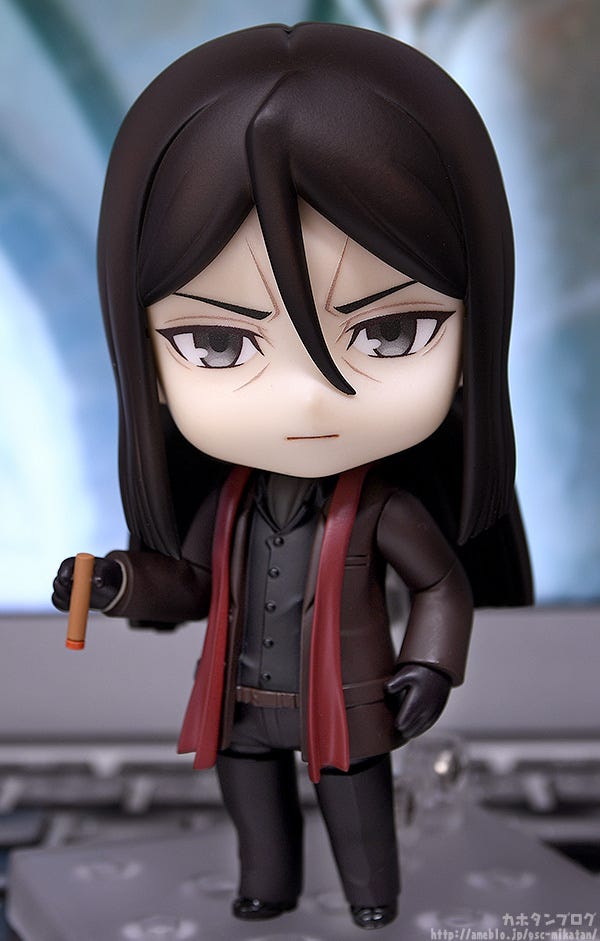 From the anime series “Lord El-Melloi II’s Case Files” comes a Nendoroid of Lord El-Melloi II! He comes with three face plates including his standard expression, his smoking expression and a tired-looking troubled expression. For optional parts he comes with a cigar, a match, a book, a magnifying glass, a white t-shirt for a somewhat rougher appearance, ponytail hair parts and a teacup. Be sure to add him to your collection!

“In a way, you could say that the modern magus is in the business of gathering angels.”

The wrinkles between his eyebrows, his red scarf and sharp-looking outfit have all been carefully recreated! He also comes with a match as an optional part, so you can display him lighting his cigar! ▲Easily recreate the solemn scenes from the series!

In addition to his standard expression shown above, a smoking expression is also included! A cigarette can be placed in his mouth and Glasses are also included so you can display him relaxing too!☆彡 (The flipping pages of the included book give it a mysterious feeling!)

Let’s take a look at his third expression! His tired-looking troubled expression is included!

With his magnifying glass in hand, you can pose him scouring the floor for clues. Using the included arm and leg parts, you can recreate this classic detective pose. (σ * ´v`)σ Usually it is enough to simply use the interchangeable arm and leg parts with the support stand, but when you really want to make sure he’s firmly planted on the base, you can use the included interchangeable hand part with base attachment peg! By the way, I used the standard part on the right in the pictures above!

By the way, you can also use the leg parts like this…! Have fun combining all these parts when you take him home! ◎

By the way, the glasses parts from earlier can also be used with his standard expression and troubled expression! ～₍₍(∩´ ᵕ `∩)⁾⁾ ▲The glasses attach inside the front hair parts! White t-shirt parts, a ponytail hair part and a cup of tea are also included!

Somewhat based on King of the Conquerers Iskandar’s t-shirt look, his t-shirt is a rough-looking v-neck! ((｀・∀・´))

By the way, the front hair part is the same as before, but the back hair part changes for his ponytail look! ♪

His ponytail is jointed, making it easy to move for different poses!  ٩( ᐛ )( ᐖ )۶ ▲Of course, other face plates can be used with the ponytail part!☆ Available for preorder from the 6th of August to the 5th of September!