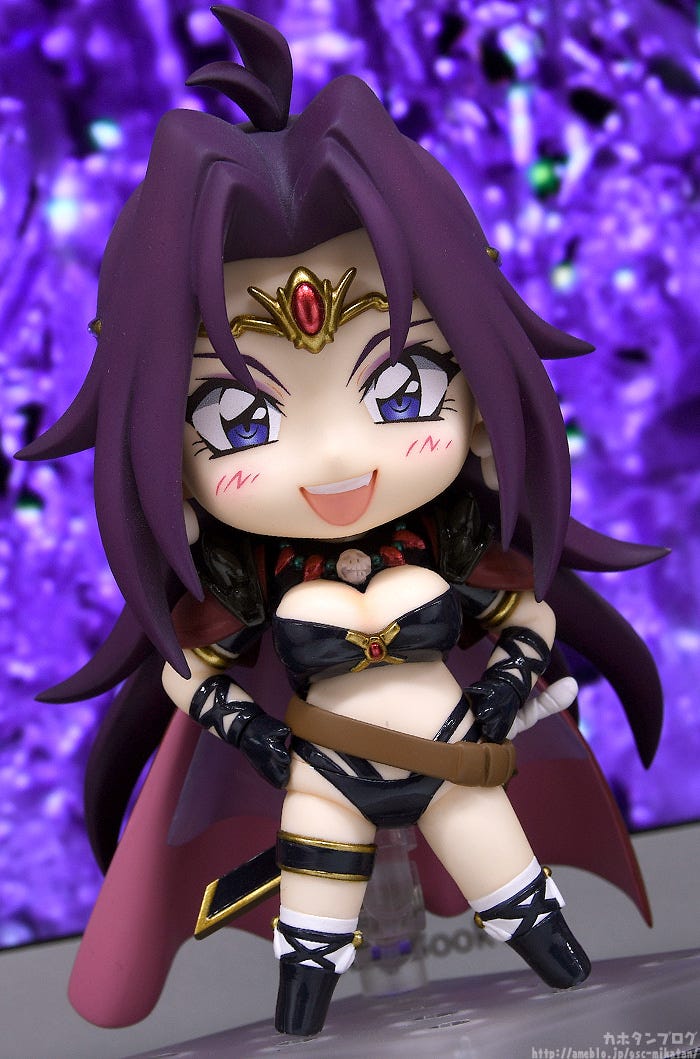 Naga’s signature laughing poses can be easily recreated using the included interchangeable hand parts. Effect parts to recreate Naga’s Freeze Arrow and Bomb di Wind spells are included. Display with the previously released Nendoroid Lina=Inverse (sold separately) for even more fun! Be sure to add her to your collection!

From the masterpiece fantasy novel often called one of the greatest light novels ever made, “Slayers”, comes a Nendoroid of the sorceress Naga the Serpent!

Following Nendoroid Lina=Inverse, this is the second Nendoroid from Slayers! (๑•̀ㅂ•́)و✧ Even at 10cm, Naga’s eye-catching busty physique has been faithfully recreated! Her scanty outfit has also been faithfully captured, pushing the limits of what is possible with a Nendoroid figure!

Her costume has been recreate with glossy paint, giving it a different texture compared to her cape. ▲Various parts like her earrings have been painted to have a metallic appearance. ((｀・∀・´))

You may have saw in a previous picture that her skull-adorned necklace has been recreated perfectly as well! ☆ Take a look at her hand in front of her mouth! ＜●＞＜●＞ Yes! That unique shape has been faithfully recreated!

It may be hard to see with the gloss of the gloves, but each finger has been sculpted one-by-one! ₍₍(∩´ ᵕ `∩)⁾⁾

As for her third expression, it’s her crying expression! ( ；∀；) This expression looks great in Nendoroid form too! ♥

The tears have been recreated with translucent parts and attach right to the face plate! ♪ ▽The effect parts stand on their own, allowing you to display them however you’d like!△ △Attaches to the base with a special support arm! ◎

You may have noticed in the last picture… Enjoy Naga’s body from all angles! Her sword is detachable too! ♪

Available for preorder from the 4th of July!

Preorders from the GOODSMILE ONLINE SHOP will include a Mask Part as a purchase bonus! ♥ Keep it in mind when preordering!◎