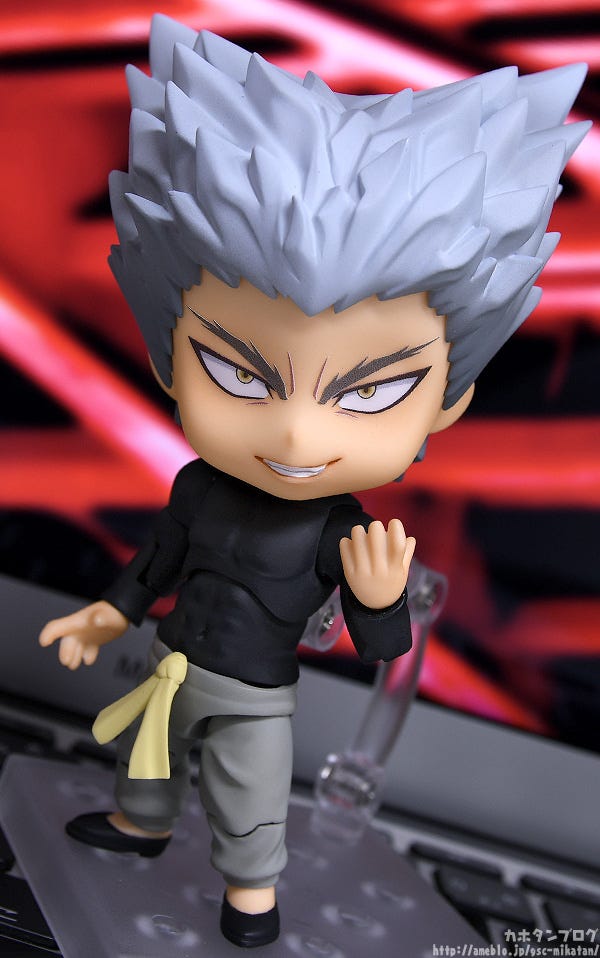 From the popular anime series “ONE PUNCH MAN” comes a fully-articulated Nendoroid action figure of Garo, the hero hunter who aims to be the world’s strongest monster. He comes with two face plates including his standard expression and his combat expression often seen during action scenes. Additionally, effect parts for recreating your favorite battle scenes are included! Be sure to add him to your collection, along with the rest of the “ONE PUNCH MAN” Nendoroid series!

“Time to conduct evil. Let’s make this a slaughter party.”

From “ONE PUNCH MAN” comes a Nendoroid of the experience hero hunter Garo!

The Nendoroid is fully articulated allowing for a wide variety of combat poses!

While he stands at just 10cm, Garo’s muscular physique has been perfectly recreated! ▲Look at those arms! ▲His back muscles are well-defined too! Not only has his six pack been recreated, you can see his obliques too! Incredible detail!

As for face plates, he comes with his determined standard expression. ▲The additional wrinkles and furrowed brows make for a serious impact! ▲The nuance of his fingertips has been perfectly captured! ★

By the way, both a standard part and windblown part of the cloth at his waist are included for even more possible poses!

These effect parts are also included to recreate the attack in Nendoroid form! ((｀・∀・´)) Two of the parts are attachable to his hands while three parts that attach to support arms are also included. ▲Two long support arms and one shorter one are included. ( ˘ω˘)

Available for preorder from the 2nd of July to the 1st of August! Be sure to add both of them to your collection!