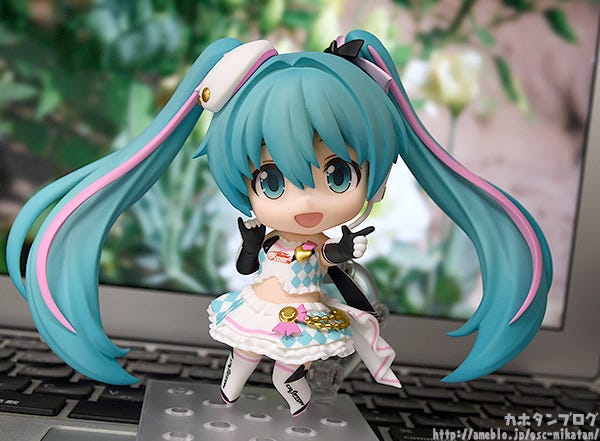 Pollen season has arrived in Japan! I wonder how bad it’s going to be this year. (((=ω=))) The official character of the 2019 Hatsune Miku GT Project, Racing Miku, is joining the Nendoroid series! This year’s design by popular illustrator Annindoufu features a frilly costume fit for this particularly idol themed version of Racing Miku! She comes with two face plates including a cheerful smiling expression and a playful winking expression!

Optional parts include a flag to support the team and a Nendoroid car for her to ride in! Be sure to add her to your collection and cheer for the team once again this year!

A Nendoroid of the official character of the 2019 Hatsune Miku GT Project!

The Racing Miku that will fight with us through 2019 has been brought down to adorable Nendoroid size! ☆ This time the Racing Miku theme is idol! ♪

Created this year by illustrator Annindoufu! ▲From the GOODSMILE RACING official site!

The frills and ribbons of her outfit are adorable even in Nendoroid size! ♥ Her outfit is mainly white, pink and sky blue with touches of black accent, making for a somewhat mature look! ( ⁎ᵕᴗᵕ⁎ ) She comes with two face plates including her smiling expression and ▲You can pose her blowing a kiss using the special bent arm parts! ▲That sly look is great！

Speaking of hearts, her headphone is a beautiful white heart! ♡ ▲It’s hard to see from the front, but be sure to take a look when you take her home! ◎

For optional parts, she comes with a flag for supporting the team’s car! A 2019 version of the Nendoroid car is included!

Have fun displaying her in it! ★ Preorders for many products at the GOODSMILE ONLINE SHOP are closing soon! Here are the products closing 7th March 2019 (Thu) at 12:00JST!