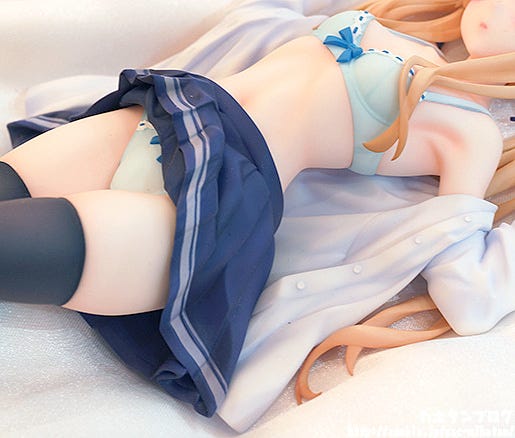 From “Saekano: How to Raise a Boring Girlfriend” comes a 1/7th scale figure from KADOKAWA of Eriri Spencer Sawamura. The figure is based on the illustration by Kurehito Misaki that was originally used for a dakimakura hugging pillow.

Eriri is posed with her shirt opened up revealing her elegant curves. She has a slight blush on her cheeks allowing fans to enjoy her slightly embarrassed appearance as she lies in a rather revealing pose. All the details on the back that were never visible on the original illustration have also been faithfully included, so be sure to take a close look once she joins your collection!

The blond childhood friend descending into your bedroom!

A figure based on a hugging pillow illustration that was done by character designer Kurehito Misaki, originally included in the “Eriri Box”!

A figure of Eriri… in a rather revealing… She doesn’t come with a stand since she is lying down, but in its place she comes with a lovely white cushion to display her on, which also really brings out the atmosphere of the figure!

The slight blush on her cheeks is lovely!! ☆ The blush makes looking into her eyes all the more of a rush! The fact that this pose is so different to her normal character is also what makes it such a lovely experience!

Personally I quite like this angle from the back! You get a lovely look at all the curves along her body! She has a very slender build, but it still has just enough substance to it that leaves to looking soft to the touch! ♪ Lying down figures are fairy rare, but they have a special charm to them! The fact that you don’t see them very often adds an extra special feeling!

Plus, as is written in the release text… “all the details on the back that were never visible on the original illustration have also been faithfully included”! Definitely something to look forward to! ♪

Your very own Eriri to lie by your side! She is currently up for preorder!★

▼Body
・Add your nickname so you can be credited! You can also provide a link to your Twitter or official site and I will link it when I credit you!
・Add a comment regarding your photo! It doesn’t have to be long, just where or why you took the photo!

▼Photo
Take and attach a photo that includes GSC distributed figures that relates to the theme below!

▼Theme
Dazzling Shot
Take a photo of your favorite figure that shows off his/her charm in the best way possible!

If you’re happy to let me use your photo as my header and show it on the blog, please send it through!

Preorders for many products at the GOODSMILE ONLINE SHOP are closing soon! Here are the products closing on the 21st June 2018 (JST)!