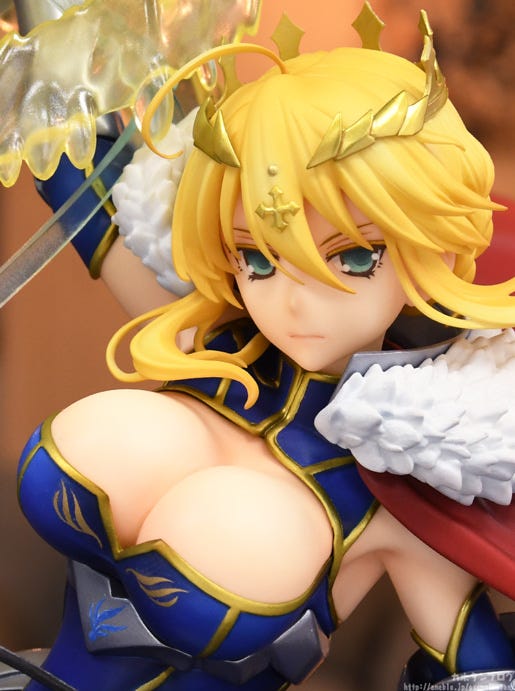 My third Kahotan blog! Takamii (@gsc_takamii) from GSC’s planning department here! Today I’m going to be taking a look at… From the popular smartphone game “Fate/Grand Order” comes an impressive 1/8th scale figure of the Lancer servant, Altria Pendragon, based on her appearance in her third ascension! She is posed riding her beloved steed Dun Stallion in a heroic and mature pose that captures her as if just before making use of her powerful Noble Phantasm.

The crimson cape that billows behind her and the deep blue outfit that shows off her impressive curves have all been sculpted in intricate detail, and the impressive armor on both the horse and Altria herself gleam with silver beauty. In her hand she holds the holy lance, Rhongomyniad, which makes use of translucent parts for a truly magnificent appearance. Be sure to add her to your side and experience the mighty Lancer and her trusty steed right by your side!

Shining to the ends of the world…

Piercing the sky and linking the ground…

Anchor of the storm! Such an overwhelming presence!! The figure has been sculpted based on her third ascension from the game!!

There are so many figures from the Fate series out there, but I can say with confidence that this is the top-class of quality in terms of Fate figures!! Compared with the collectable figure you can see just how huge the figure is! Perhaps a comparison with an iPhone7 will be better… It’s more than two times the size of an iPhone7! Not to mention how lovely and haughty she looks!

The figure is definitely more than just bi though, the amount of details of all the different parts of the figure, from the horse to the outfit to her amazing curves and facial expression… even the lance and the base are all so stunning!

The lance makes use of three different translucent parts to capture the beautiful swirling glow of her Noble Phantasm!!

Next up we have a closer look at the King’s beautiful face! She has the beauty of a goddess!! You can really see the difference in maturity compared to Saber/Altria Pendragon with the cool and composed look on her face! The details of the crown and the cross on her hair have also been beautifully preserved on the figure! Your eyes may have wandered elsewhere on this photo though.

Let us move our gaze down to her hips, where you can see the contrast of textures between the heavy looking armor, the elegant fabric of her outfit and the little gaps showing off some bare skin!! The creases of the fabric areas and the sharp look of the armor is truly such a pleasure to look at close up! The details are exquisite! Even from the back the figure is filled with highlights! The curves of her body are lovely and just look at the detail of the back of her hair – it is in fact a rather different style to that of the Saber version of Altria Pendragon. Even from the back she has such a charismatic feeling to her! You can see why she is a King. The golden lines that adorn her outfit also add an extra level of elegance.

I know I’m repeating myself here, but once again note the different textures along her side: the skin under her arm, the metallic armor, the soft fabric and the lance. This is what I call a work of art. But now it’s time to move onto the second character that is a part of this figure… The details of the bit mouthpiece, the belts and the saddle are simply outstanding! Through the gaps in the horse armor you can also make out the muscular build of Dun Stallion as he rears confidently with Lancer on his back!

Another thing that really stood out to me when taking photos was that his expression really changes depending on the angle you choose to look from! He really is a beautiful stallion that looks like he comes right out of a famous painting in a museum. Also take note of those adorable eyes!! A horse just as beautiful as his rider! On the final product, the Dun Stallion is planned to be held up with a special included stand to ensure that he can stand up securely! Another point that I really love about the figure is the look of the fabric that hangs from the saddle – you can see it has a rather tough, thick looking appearance compared to the fabric of her outfit! Can’t you just imagine how this would feel to the touch? Compare the fabric above to the flowing appearance this part of her outfit and you can really see the different in textures, all captured though the sculpt and paintwork!

“Let me show you the Lance of Light!” She’ll be up for preorder from tomorrow! See the GSC site for more details!
⇒ http://www.goodsmile.info/ Purchases of Nendoroid Lancer/Elizabeth Bathory from the GOODSMILE ONLINE SHOP will include a Heart Effects (Large/Small) as a bonus! Chan-shuu senpai revealing the secret of one of official photos from tomorrow! Be sure to find it on the product page tomorrow!