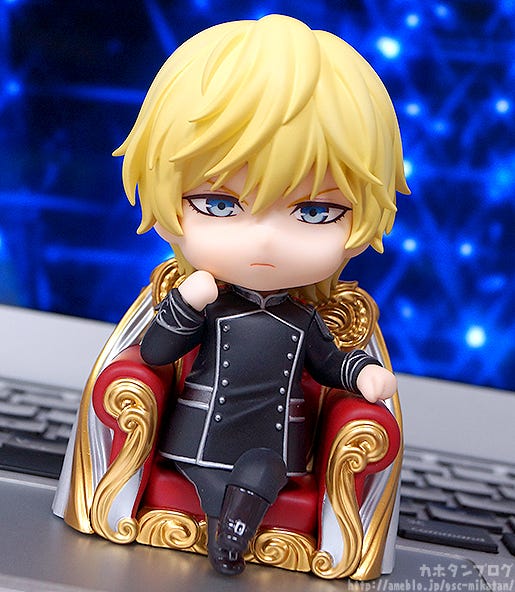 Whenever I see those “space foods” that are identical to the ones that astronauts buy I always try one! My favorite so far was the chocolate cake! I would happily eat it all the time!! From the anime series “Legend of the Galactic Heroes: Die Neue These” comes a Nendoroid of the indomitable hero of the Galactic Empire, Reinhard von Lohengramm! He has been sculpted wearing his admiral uniform and comes with three face plates including a standard expression, a shouting expression and a smiling expression.

Optional parts include the extravagant captain’s set from the Brünhild flagship, allowing you to display him as if seated in the bridge. A Kelsey cake baked by his older sister Annerose is also included to display with him. Be sure to add Reinhard to your collection and enjoy all sorts of situations in cute Nendoroid size!

From the anime series “Legend of the Galactic Heroes: Die Neue These” comes a Nendoroid of tahe military genius with blond hair and ice blue eyes, Reinhard von Lohengramm! His stylish black admiral uniform has been converted into adorable Nendoroid size! ♪ ▲ The flow of his hair has also been captured nicely! (｀・ω・´)ゞ

He comes with three face plates, the first of which is his calm and composed standard expression you can see above, and his second is a shouting expression to display him confidently commanding his forces! ▲ You can just imagine his astute voice!

In addition, he also comes with a Captain’s Seat based on the seat of the bridge from Brünhild flagship! ((´д`●))三((●´д`)) Along with the fancy seat, he also comes with an interchangeable lower body part to display him seated on it with crossed legs! ▲It’s beyond the level of optional parts! It’s like a whole extra figure! ☆ But the exact same pose with a different arm and face plate can suddenly make for a much more brooding appearance! (´□｀｡) Simply find the pose that you like best once he joins your collection! ♪

But we still have more optional parts to show! The Kelsey cake baked by his older sister Annerose!

Plus he also comes with a smiling expression which can be used together with the cake to show Reinhard when he is away from his military duties! There will also be a commercial for the Nendoroid airing during episode 8 of the anime series on TOKYO MX tomorrow!! Be sure to take a look!!

Last but not least, don’t forget that we also have another Nendoroid from the series currently in the works!
Nendoroid Yang Wen-li!