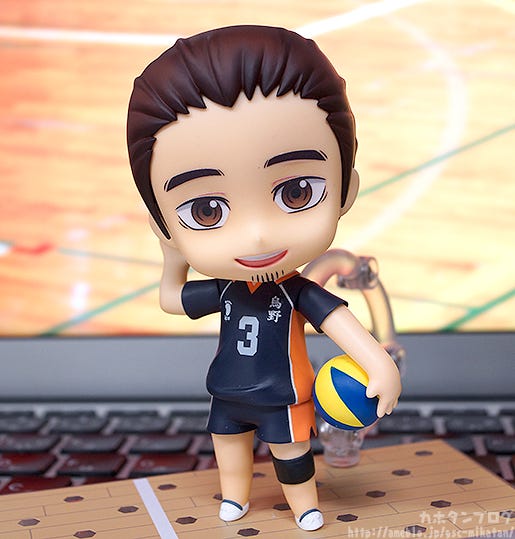 Today I’m going to be taking a look at…
Nendoroid Asahi Azumane! From the popular volleyball manga series with an equally popular anime, ‘Haikyu!!’, comes a Nendoroid of one of Karasuno High School Volleyball Club’s “dependable ace”, Asahi Azumane! He comes with three face plates including a gentle standard face, a serious expression for displaying him playing a match as well as the panicked expression that he sometimes had in the series!

The Nendoroid allows you to recreate a number of memorable scenes from the series and also comes with a volleyball as well as a special base made in the image of a volleyball court. He also comes with alternate hair parts to display him with an alternate hairstyle! Be sure to display him with the other characters from Karasuno High School Volleyball Club and recreate your favorite scenes from the series!

“I am the ace of Karasuno High!”

The gentle ace of Karasuno High School is joining the Nendoroid series! Even in Nendoroid size his slight chin beard has been faithfully included on the design! The balance between the cuteness of the Nendoroid and his slightly wild appearance is perfect! His first face plate that you can see in the photo above is a cheerful and gentle smile, but he also has a very contrasting serious expression which is perfect for when he is playing in a match! ▲ The usual ball parts with a stand are included for dynamic scenes! He also comes with alternate front hair parts and a hair elastic part which allow you to display him in his appearance after the inter-high trials! ▲ This allows you to capture even more scenes from the series!

Moving on to his third face plate… The panicked expression he sometimes showed in the series!

The difference between character between his serious expression and this expression is amazing, and yet they both capture different sides of her personality so nicely! ♪ ▲ Displaying him with other members of the team for more fun!

Here we have the three  third-year members of the Kurasuno team in Nendoroid size! ヽ(*´∀｀)ノ ▲ Above we have the more serious look…
Below we have a more playful look! ▼ Let’s try a different group! Here we have the younger members together with Asahi for a quick shot! The ace player and his guardian deity!

The Nendoroid looks great on his own, but displaying him with the other characters from the series allows for even more fun! ♪

Be sure to add the adorable ace to your collection!
Nendoroid Asahi Azumane!

In addition, orders from the GOODSMILE ONLINE SHOP will include a Nendoroid Plus Rubber Strap: Asahi Azumane Karasuno’s Ace Ver. as a bonus! (●‘∀‘●)ﾉ” We also have another Nendoroid currently in the works! ★
Nendoroid Ryunosuke Tanaka!