Nendoroid Guardian (The Legend of Zelda: Breath of the Wild) 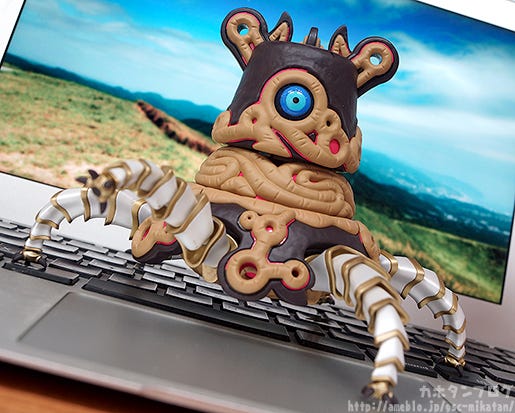 February has already come to an end! How does time go so fast!!! We already have all sorts of lovely products planned for announcement in March, and today I’m going to be taking a look at one of them…
Nendoroid Guardian! From “The Legend of Zelda: Breath of the Wild”, comes a Nendoroid of one of the ancient machines created by the Sheikah – the Guardian! The Guardian’s iconic eye can be moved around, and the head part can also be rotated 360° allowing you to faithfully recreate the movements from the game in Nendoroid size!

Optional parts include effect parts for the powerful beam attack as well as a translucent sheet to recreate the GAME OVER screen that many fans will remember seeing after facing the Guardian! In addition, an Ancient Bow is included to be used together with the separately sold Nendoroid Link: Breath of the Wild Ver.! Be sure to enjoy the cute Nendoroid sized version of the Guardian in your collection!

An ancient relic of Hyrule’s past, transformed into a Nendoroid!

From the game with fans all around the world, “The Legend of Zelda: Breath of the Wild”, comes a Nendoroid of the rather troublesome enemy known as the Guardian!! The complex patterns and unique legs that allow it to walk freely in any direction have all been captured in careful detail in Nendoroid size!! ▲ The slightly rugged appearance has also been captured with the sculpt!

Plus if we look on the underside… The details on the bottom have also been included in amazing detail, and the legs are articulated for adorable Guardian movement!! ٩( ᐛ )( ᐖ )۶

The different sections of the legs can each move individually allowing for various different posing opportunities!

▲ It’s really fun to move around in different directions!

The Guardian’s eye can also move around!!

I think this is one of the most mobile Nendoroids ever to be released, so I’m sure everyone will have great fun moving it about once it releases!! ♪ In addition, the Guardian also comes with effect parts to display it firing the powerful laser beam attack from the game!! ★ In addition, this translucent sheet is also included! (I’m sure there are many players who have seen a similar screen in game!)

The letters appear to be standing out thanks to the dark clear sheet that you place in front of the figure!! You can easily use this with just the Guardian, or you can combine it with the previously released Nendoroid Link: Breath of the Wild Ver. to bring out the atmosphere of the game even more!

In fact, Nendoroid Guardian even comes with an additional weapon for Nendoroid Link: Breath of the Wild Ver. to use: the Ancient Bow! ▲ Ideal for posing Link in battle against the Guardian!

Be sure to add the ancient machine to your collection!!
Nendoroid Guardian!