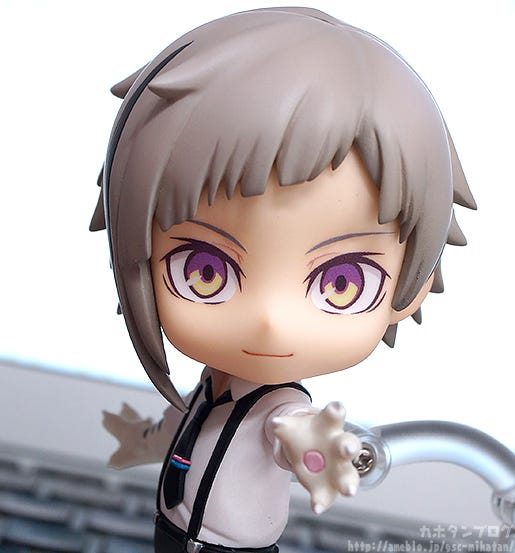 I am preparing for war against the oncoming pollen season. I get the feeling its starting earlier every year…!

Anyway, today I’m going to be taking a look at…
Nendoroid Atsushi Nakajima! From the anime series with a movie coming soon, “Bungo Stray Dogs” comes a Nendoroid of one of the Armed Detective Company members, Atsushi Nakajima! He comes with three face plates including a standard expression, an excited expression for when he has his favorite food chazuke in front of him, as well as the dumbfounded expression he would sometimes have with Dasai.

Optional parts include tiger arms to display him making use of his ability as well as a bowl with chazuke and chopsticks to display him enjoying his favorite food! Be sure to display him with the previously released Nendoroid Osamu Dazai and recreate all sorts of situations in cute Nendoroid form!

The new film is in theaters in Japan in just 4 days!! Atsushi Nakajima is joining the “Bungo Stray Dogs” Nendoroid collection!! He is the third Nendoroid from the series following on from these two! Anyway, let’s get back to Atsushi-kun!

Atsushi’s iconic hairstyle and stylish outfit have been shrunk down into adorable Nendoroid size, with careful attention given to all the little details and accessories on his design! ♪ ▲ The sticking up tips of his hair look so cute in Nendoroid size! (・∀・)

Along with his standard pose above he also comes with interchangeable parts which allow you to display him making use of his “Beast Beneath the Moonlight” ability! ★ ▲Such cute little paws… and claws!!

Even in chibi Nendoroid size the little claws look sharp and ready for a fight!! ヽ(*´Д｀*)ﾉ ▲ You can easily switch between the different arm types!

Along with the standard smiling face above, he also comes with two alternate face plates… the first of which is this excited face plate! ★ Those eyebrows and blushing cheeks!!

Atsushi-kun is known to be a rather expressive character and this face plate really captures that side of his personality! He also comes with a bowl with chazuke and chopsticks to display him enjoying his favorite food together with this expression! ((´д`●))三((●´д`)) He looks so content! I would happily give him another 30 bowls!!

The details of the chazuke is also quite amazing! From the tea to the rice to the pickled plum on the top!! ▲ So tiny, yet the coloring gives a realistic look! The adorable chibi look of the dumbfounded expression he sometimes had around Dazai fits the Nendoroid design perfectly!! (∩・∀・)∩

This expression really opens up all sorts of potential stories!!

▲ I can just imagine their voices playing through my head! (´□｀｡)

I strongly recommend displaying Atsushi together with the previously released Nendoroid Osamu Dazai for even more fun! ★ Add the newcomer to the Armed Detective Company to your collection!
Nendoroid Atsushi Nakajima!

He’ll be up for preorder from the 1st March!

In addition, orders of this product from the GOODSMILE ONLINE SHOP will includes this Nendoroid Plus Rubber Strap: Atsushi Nakajima as a bonus!!