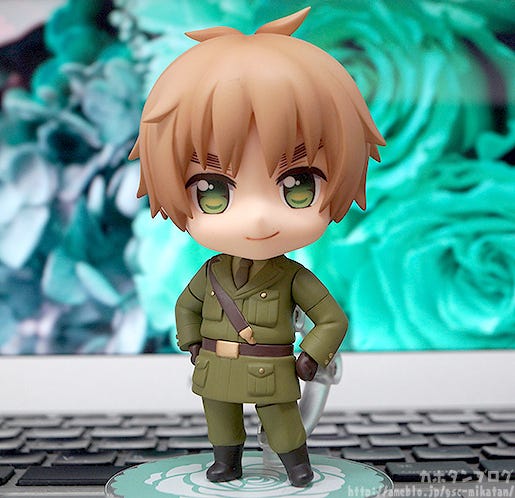 I want to drink tea with some delicious scones! Mainly for the cream on the scones! Today I’m going to be taking a look at…
Nendoroid England!★ From the popular anime “Hetalia The World Twinkle” comes a Nendoroid of England! He comes with three face plates including a standard expression filled with confidence, a tsundere expression as well as a shouting expression with blank eyes!

Optional parts include the a tea set, a fairy and a burnt scone all perfect for England! He also features a special round base decorated with roses. The sarcastic character who hates to lose but also has a bit of a romantic side is ready to join your collection – make sure you don’t miss out on Nendoroid England!

From the anime series “Hetalia The World Twinkle” comes a Nendoroid of the tsundere English gentleman who loves tea and tradition – England! His iconic eyebrows and green outfit have all been carefully converted into Nendoroid size! ▲ The gentle color and slightly wavy look of his hair is cute!

Optional parts include a tea cup and saucer, ideal for England! The white cup is filled with delicious looking tea and the Nendoroid includes a hand part to let him hold the cup and enjoy an elegant tea time! (∩・∀・)∩

A fairy is also included to display with him! The strange round form has captured together with the cute wings and stumpy tail! The fairy also comes with a separate base and stand allowing for all sorts of different possible scenes to be put together – you can even pose Nendoroid England petting him! Anyway, let’s move on and take a look at his different face plates! The first expression is the one used above which is his standard, confident expression.

Next up we have this tsundere expression which looks a bit upset but with a cute blush on his cheeks! ★ Plus if we take a closer look at what he is holding, you will notice that he has baked a delicious… burnt… scone!! (´□｀｡) (As expected of his cooking skills…!)

Moving onto his third face plate: a shouting expression with white eyes! He also comes with a pointing hand to bring the scene a little more! Which character do you think is on the other side of that pointing finger?

If you play around with poses the expression can actually be used a a bit of a shocked looking expression as well! There are all sorts of options with the various face plates, optional parts and posing possibilities, so be sure to play around until you find the pose that you like best! ♥ ▲ Here it looks like he is making the “shhhh” pose! ♪

You can also display him with the previously released Nendoroid Japan to bring out the world of Hetalia even more! ☆ Similar to the previously released Nendoroid Japan, England also comes with a special round base featuring the national flower of England – the rose! In addition orders from the GOODSMILE ONLINE SHOP will include a Nendoroid Plus Rubber Strap: England as a bonus! (●‘∀‘●)ﾉ”