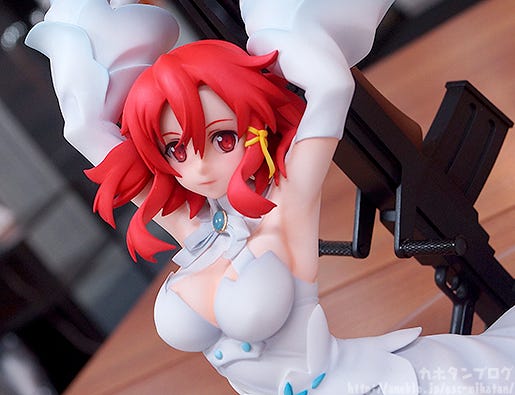 From the popular anime series “Izetta: The Last Witch” comes a 1/7th scale figure of the White Witch of Eylstadt, Izetta! The figure is based on an original illustration by character designer BUNBUN that was specially drawn to be transformed into a figure! Her curved back and tight outfit ensure that the beautiful curves of her body have been captured on the figure, and the sleeves and skirt of her outfit have a sculpt that captures the light and airy feeling of the fabric as it spreads outward.

She holds the Izetta Custom Anti-Tank Rifle behind her, which towers over her in size showing how large the weapon is even in 1/7th scale size! Her vivid red eyes and hair stand out against her white outfit beautifully, and the outfit itself also has shadows included all over the design to make it stand out with more detail and ensure a figure that fans will be proud to own in their collection!

A 1/7th scale figure of the White Witch of Eylstadt!

This figure is based on this original illustration by the Izetta: The Last Witch character designer, BUNBUN! ▲ The illustration was specially drawn for the figure!

Just as you can see in the illustration, the soft looking curves of her body that can be seen though the white outfit have all been captured beautifully on the figure! The Izetta Custom Anti-Tank Rifle she holds behind herself has also been included in 1/7th scale and in amazing detail! ▲ The rifle sits around 290mm in height!

The dainty hands holding the huge rifle also make for some nice contrast! ▲ The position of each and every finger has been so carefully done! The confident red eyes draw you right in!!

There is something about her eyes that make it so hard to look away once you lock eyes with her!! The feeling behind the expression also changed quite a lot depending on the angle you look from!

From this side she has a more mature, charming look to her! The fact that you can look and enjoy from various different angles is one of the things that makes figures so special!! Be sure to find the angle of Izetta that you like best! ♡

Let’s take a closer look at the base! ♪

The design on the bottom of the base features a design that is based on the background of the original illustration! (っ’ω’)っ)) ▼ On a white surface to make the pattern stand out better!▲ Be sure to take a nice close look at the base!

Add the White Witch of Eylstadt to your collection!
1/7th Scale Izetta! ★ She’ll be up for preorder from the 31st October!

Be sure to check the Good Smile Company Website for more details! ♪