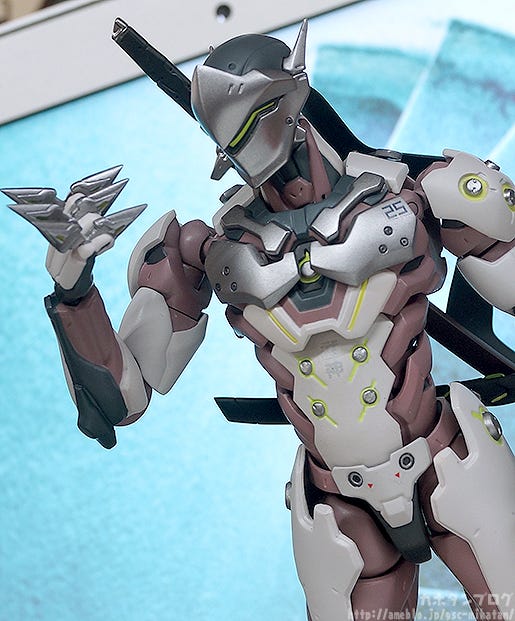 Today I’m going to be taking a look at this product currently up for preorder!
figma Genji! From the globally popular multiplayer first-person shooter Overwatch® comes a figma of Genji!

The youngest son of the master of the Shimada ninja clan that ended up with a cyborg body is joining the figma series!

The separated parts on his side, the intricate details on his chest and the tiny little bolt-like parts all over his body! Every little detail has been captured in exquisite detail on the figma! ▲ The face and upper chest area have a metallic paint that differs from the rest of his body! ♪

Even from the back his form has been captured just as faithfully! (∩・∀・)∩ ▲ Note the contrast between the organic looking curves and the sharper metallic parts of his cyborg body!

Along with a set of shuriken to hold between his fingers ready for combat, he also comes with a special effect part to display him throwing them! (｡･ω･)ﾉﾞ This allows you to pose him attacking just like in game! ★ His bandana is fitted with a ball joint that allows you to give the figure a dynamic feeling of movement as he dashes forward for jumps! Simply match the movement to your pose!

In addition to the shuriken, he also comes with his Dragonblade sword as well as his wakizashi! The various weapons that are used in the game are all included to recreate his attacks, but you can also of course easily create your very own original poses with the parts!ε=(｡・д・｡) There are many more photos over on the product page, so be sure to take a look! Personally I love the way his fingers have been positioned in this pose!! The sculpt of the figure has had no compromises made, creating an action figure that is not only great to move around and play with but also looks incredible detailed and faithful to the game’s design!

Here he is displayed with the previously announced figma Tracer! ★ ▲ Displaying multiple heroes together brings out the atmosphere of the game! figma Tracer is scheduled to release in December 2017!♪

As a side note, the poses in today’s blog were all done with the assistance of Max Factory’s I.G. Sakai! (@sakai_max )

Be sure to add the second Overwatch figma to your collection!

Preorders from the GOODSMILE ONLINE SHOP are open until the 16th November 2017 at 21:00JST! Don’t miss out!

Preorders for many products at the GOODSMILE ONLINE SHOP are closing soon! Here are the products closing on the 26th October (JST)!