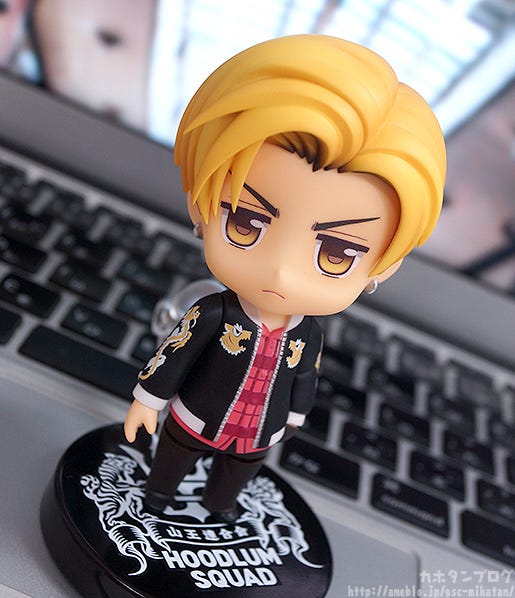 Today I’m going to be taking a look at…
Nendoroid Cobra! “HIGH&LOW g-sword” brings out the atmosphere of HIGH&LOW with cute illustrations by CLAMP, and from that series comes a Nendoroid of the Sannoh Hoodlum Squad’s Cobra! He comes with two face plates including a confident standard expression as well as a serious expression he often shows while in fights. The Nendoroid also includes his red scarf and a selection of interchangeable hand and leg parts allowing for all sorts of poses to enjoy!

“This fight will mean life or death.”

From HiGH＆LOW g-sword comes a Nendoroid of the Sannoh Hoodlum Squad’s Cobra!! The outfit he is wearing is based on the outfit seen on the poster for the movie “HiGH&LOW THE MOVIE 2 / END OF SKY”! His hairstyle has also been faithfully captured in lovely detail – note that the area closest to his head has a black gradient! His hair looks lovely and silky from the back, and the fierce looking tiger on the back of his jacket and even his pants have all been faithfully converted into Nendoroid size!

If you look up close you will notice there are also tigers on the front of his jacket too! How can they look so fierce and so cute at the same time! (*´ｪ`*) ▲ Also note the chequered shirt and even the details of the jacket zipper!

I am sure there are a lot of people that already know this, but for those who don’t let’s take a quick look at what the series is all about! (●‘∀‘●)ﾉ”

As you can see the project is provided through all sorts of different media!

I really don’t think I can explain the series all that well myself, so I’m going to borrow the official cast and story explanation video to do a better job! It should give you a good feeling for the atmosphere around the series!

But what is HiGH＆LOW g-sword?

g-sword captures the spirit of the HiGH＆LOW but is transformed into a much cuter looking manga by the authors of Card Captor Sakura, CLAMP! The series is serialized in Weekly Shounen Magazine and the manga volume scheduled to released in 17th October also comes with a DVD featuring flash animations of the series.

Anyway, let’s get back to the Nendoroid!

Along with the standard confident standard expression above… He also comes with a serious expression for combat scenes!

Together with the bent arm and fist parts you can even pose him wiping his mouth like above! In addition, he also comes with the red scarf! ★ Cobra is known to use his scarf for various combat techniques in the middle of fights! You can enjoy that element of him with the Nendoroid too!

The scarf can also simply be placed around his neck like the photo below! ▲ The scarf has a nice dynamic feel to it!

I’m quite sure that quite a lot of newcomers to Nendoroids might decide to pick this one up, so we’ve made him relatively simply and easy to put on display! He comes with various different arm and leg parts that can quickly be switched out to give him a different pose! ☆ ▲ Place his hand behind his head… ▲Or pose him ready to take a punch!

In addition, most parts of Nendoroids can be used with other Nendoroid characters for even more posing opportunities!

If you do choose to preorder it will be a little while before he arrives at your home, but once he does you’ll be able to enjoy him in all sorts of different poses! (｡･ω･)ﾉﾞ HiGH＆LOW has many more charming characters that I would love to see join the Nendoroid series together with Cobra! I hope I’ll get the chance to work on some more characters!! (only time will tell!)

Last but not least, note that he comes with a special round Nendoroid base featuring the Sannoh Hoodlum Squad logo! ★ ▲Note that the standard Nendoroid stand is not included.

Be sure to add the cute Cobra to your collection!
Nendoroid Cobra! He will be up for preorder tomorrow!