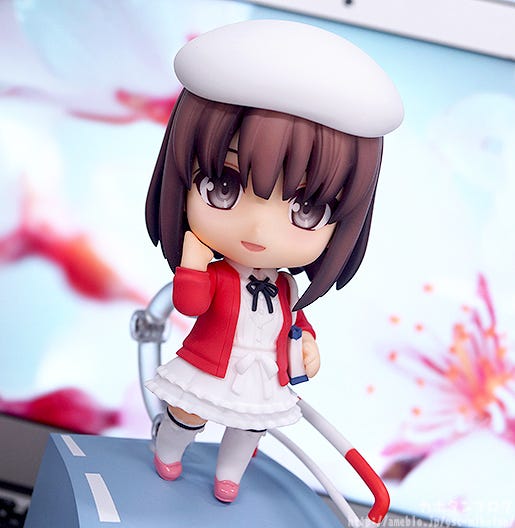 I sometimes have a stealth system that activates when I don’t want it to. Sometimes it takes ages for the staff in restaurants to notice me calling them… From “Saekano: How to Raise a Boring Girlfriend” comes a Nendoroid of the main heroine Megumi Kato wearing her heroine outfit! The outfit that she first met Tomoya in, which also plays an important role in the series, is finally joining the Nendoroids! The beret style hat that has always been a rather iconic part of the outfit has also been included in Nendoroid size, and comes in two different sizes allowing you to display her either wearing or holding it.

She comes with three face plates including a smiling face, a blank face for when she ignores Tomoya as well as a crying expression. An alternate arm wearing her school uniform can be used together with the crying face and the previously released Nendoroid Megumi Kato in order to recreate the scene from the broadcast room in the 7th volume of the original novel.
The Nendoroid also features a special hill base in order to recreate the first meeting scene and really bring out the heroine power of Megumi in Nendoroid form! Be sure to add her to your collection!

“Shall we try dating?”

This item will be included with the Saekano: How to Raise a Boring Girlfriend ♭ Memorial Book with Nendoroid Megumi Kato: Heroine Outfit Ver. Limited Edition, but it will also be sold as a standard item in countries outside of Japan!

The Nendoroid features Megumi wearing the outfit from the scene that influenced Aki-kun to work toward his dream of making games! It even includes the hill from the scene!!

Let’s take a closer look at the product’s features!

1) A Hill Part is Included! The standard Nendoroid stand connects at the back allowing almost any Nendoroid to stand atop the hill! The red and white safety barriers are sculpted with a bit of an elongated look in order to bring out a feeling of perspective on the hill! A standard hat that she can actually wear on her head is included as you can see in the first few photos, but she also comes with a second hat to hold in her hands to recreate the above pose! This blank expression devoid of any life is also included to display her ignoring everything around her. I can also think of various other situations where this expression would come in handy! A cute expression with tears brimming in her eyes and a slight blush! I there anyone that could look at this face and not feel for her?!

This expression can also be used together with the previously released Nendoroid Megumi Kato (sold separately) in order to recreate the scene from the broadcast room in the 7th volume of the original novel!ヽ(ﾟ∀ﾟヽ 三 ﾉﾟ∀ﾟ)ﾉ ▲ This was around episode eight of the second season in the anime!

Meet your very own heroine at the top of the hill road! This product will be included with the Saekano: How to Raise a Boring Girlfriend ♭ Memorial Book with Nendoroid Megumi Kato: Heroine Outfit Ver. Limited Edition! It will not be available as a standard product in Japanese stores, but our overseas partner shops as well as the GOODSMILE ONLINE SHOP will also have it available for preorder.

Don’t forget that this scale figure of Megumi is also currently up for preorder!
1/7th Scale Megumi Kato: Swimsuit Ver.