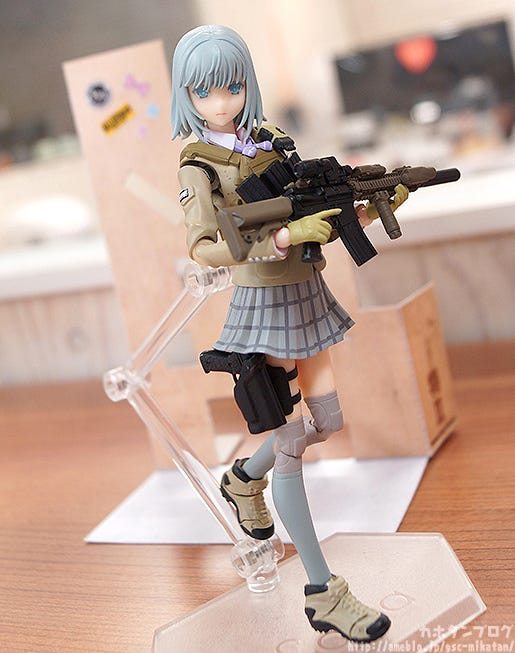 I really can’t function in the heat of summer, and thus always rely on air con and fans. I can’t believe it’s still going to get even hotter than it currently is!

Anyway, today I’m going to be taking a look at this product from TOMYTEC that is currently up for preorder…
figma Rikka Shiina! From TOMYTEC’s ‘Little Armory’ 1/12th scale weapon model series comes a figma of one of the series characters – the elite tactical girl’s school member, Rikka Shiina!
· The smooth yet posable figma joints allow you to act out a variety of different scenes.
· A flexible plastic is used in specific areas, allowing proportions to be kept without compromising posability.
· She makes use of drawer joints in her shoulders allowing her to easily wield the ‘Little Armory’ weapons.
· A plastic model runner kit for a Special Forces Carbine Rifle is included. The model is limited to the figma release and includes a holographic sight, muzzle booster, laser module, light, dual switch and foregrip as optional parts to attach to the weapon.
· She comes with both a standard expression and a more serious expression for combat scenes.
· Optional parts include an alternate skirt to pose her crouching, as well as a handgun with mounted light that can be holstered, and a transceiver.
· The background sheet of the product comes with two different target practice targets that can be cut out and displayed with her as a training ground.
· The package includes an original illustration by illustrator Haruaki Fuyuno.
· An articulated figma stand is included, which allows various poses to be taken.

“If I concentrate, they all stop. All I have to to then is take them out them one-by-one.” You can find out more about her character over on the official site below together with the beautiful illustration of her! (*´ｪ`*)

For those who are unaware, the Little Armory series is a set of 1/12th scale plastic model kits of various weapons that can be put together and displayed with your favorite characters! They are just the right size for figma figures! You can find a listing of the various products in the series here!

But getting back to the figma! Just like the previously released figma Miyo Asato she comes with a special alternate skirt part that allows for crouching poses ヽ(ﾟ◇ﾟ )ﾉ ▲ Not just the skirt, but the bottom of the jacket is also specially re-sculpted!

These parts allow you to display her sitting… Even sitting with her legs out! It really opens up a whole new set of different poses with just a quick switch of parts! (ﾉ｡･ω･)八(｡･ω･｡)八(･ω･｡)ﾉ

You can even use these sitting parts for sexy poses like this!

All sorts of different options to play around with and enjoy! ♥

By the way, the figma also includes a Little Armory “Special Forces Carbine Rifle Exclusive Edition” as a runner kit to put together! The parts are quite small, but I am told it is still made very quite easy even for beginners to put together! The basic gun itself can be put together without any adhesive, but the more intricate parts to require some gluing!

The best thing is you can use combine her with the other items in the Little Armory series and really bring out the feel of the universe behind the series! ♪ All sorts of parts to bring your figma Rikka to the next level!ヽ(●´Д｀●)ﾉ

Plus you can also display her together with the previously released figma Miyo Asato who is also currently up for rerelease! ▲ Displayed with various guns and the Gun Rack C! ☆

Add a Little Armory to your collection!
figma Rikka Shiina! Preorders at the GOODSMILE ONLINE SHOP are open until the 10th August 2017 at 12:00JST! Also be sure to take a look at TOMYTEC’s promotional video below! (人´∀｀*)