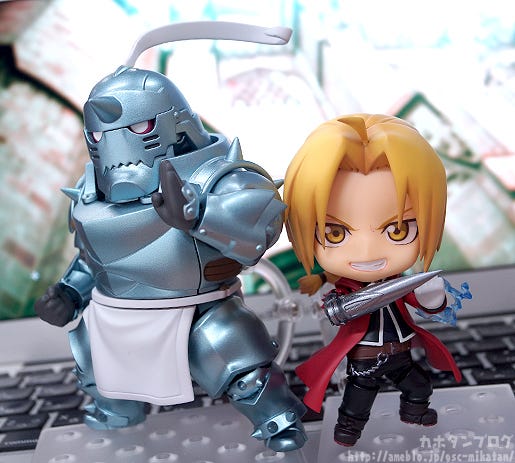 Today I’m going to be taking a look at the younger of the Elric brothers…
Nendoroid Alphonse Elric! From the popular “FULLMETAL ALCHEMIST” series comes a Nendoroid of the kind-hearted Alphonse Elric! The metallic appearance of the suit of armor that harbours his soul has been carefully sculpted and fitted with joints for all sorts of different display possibilities. Al comes with three different face plates including a standard face plate with articulated eyes that can look in different directions, as well as both flustered and relaxed chibi-style expressions.

As he is also known as a cat-lover, the Nendoroid comes complete with two different cats to display around him, and the chest plate of his armor can also be removed to display the cat laying inside his armor! Be sure to display him with the previously announced Nendoroid Edward Elric and enjoy the company of the Elric brothers in your collection!

From FULLMETAL ALCHEMIST comes a Nendoroid of Edward Elrics younger brother, the “Armored Alchemist” Alphonse Elric! The heavy looking metallic body has been preserved perfectly, and has been painted with a slightly blue tint based on the coloring from the anime series! ♪

At first glance it may not really look like a Nendoroid, but the figure makes use of numerous Nendoroid joints and of course a Nendoroid stand… and is therefore a Nendoroid!! The parts of the figure are much larger than a standard Nendoroid making the arms and legs so fun and easy to move around! The eyes are articulated from the inside of the head allowing you to change the direction he is looking in! ε=(｡・д・｡)

In addition, the head parts are swapped out by completely removing the head, which also of course means you can pose him with no head whatsoever! Note that the Blood Sigil drawn at the back is also included!!

Even though this part is normally covered up with the head parts, it was an important enough aspect to the story to ensure it was included on the Nendoroid!!

Anyway, let’s take a look at his other head parts! Along with the standard expression seen above, he also comes with a flustered chibi expression for when his brother is shouting at him!! As well as a relaxed chibi expression for when he is surrounded by his beloved kitties!! (灬ºｗº灬) ▲ The leg joints have a wide range allowing him to be seated like this!

The two adorable kitties are also included to display beside him! ♪ They are so adorable!!! Just look at those cute little faces!!!! You can even pose a cat inside his armor!!

The above photo just captures Al so perfectly!! The front plate of the armor can be removed and have a cat or anything else placed inside for a rather interesting display option! ((´д`●))三((●´д`))

The Nendoroid also stands 12cm in height making it slightly larger than most standard Nendoroids to bring out the huge suit of armor appearance even more effectively! ▲ Displayed together with his brother! Ed is still up for preorder!

The number of fun posing ideas between these two is probably endless, but here is a little animated gif I made showing the two of them trying to high five! ☆

Al all by himself is already an absolutely incredible Nendoroid, but posing him together with his older brother really brings out the atmosphere of the series and allows you to recreate even more scenes from the series… as well as all sorts of original scenes! (ﾉ｡･ω･)人(･ω･｡)ﾉ

Be sure to add the gentle armored giant to your collection!
Nendoroid Alphonse Elric!

In addition, orders from the GOODSMILE ONLINE SHOP will include a Suitcase (Including Holding Hand for Edward) as a bonus!! ★ ▲ Designed for use with Nendoroid Edward! (sold separately)

As I mentioned above, Nendoroid Edward Elric is still up for preorder!! Orders for Nendoroid Ed are open until the 10th August 2017 at 12:00JST and will also comes with a Spiked Bat & Hand Part for Ed as a bonus! If you order both of them now you can also save on shipping!! Make sure you don’t miss out! (∩・∀・)∩ In addition, we recently announced that Roy Mustang would also be joining the Nendoroids! Stay tuned for more updates!