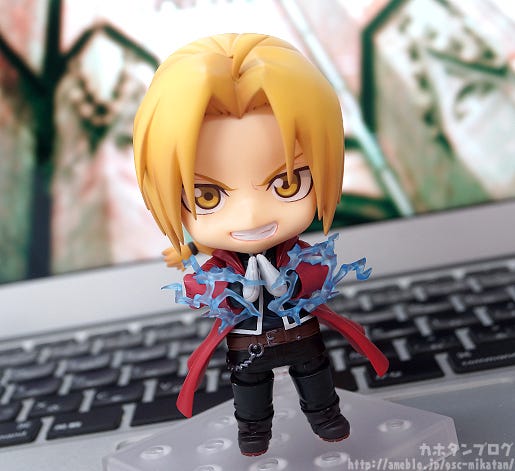 Today I’m going to be taking a look at the much-awaited…
Nendoroid Edward Elric!★ From the popular “FULLMETAL ALCHEMIST” series comes a Nendoroid of Edward Elric! He comes with three different face plates including his standard grinning smile, a tough-looking serious expression as well as an angry expression perfect for when anyone calls him short!

He has specially articulated arm parts that allow him to be displayed with his hands together in his classic alchemy pose, and he also comes complete with parts to display his automail right arm revealed, along with parts to switch it out into a blade.

He also comes with alchemy effect parts, a wall part being transmuted out of the ground and a special lower body part that allows him to be displayed crouching down. Enjoy the adorable Nendoroid Edward in your collection!

Nendoroid Alphonse Elric will also be available for preorder soon, so be sure to display the brothers together!

“I’ll show you there’s no comparison between us!”

The youngest State Alchemist in history that became known as the “Fullmetal Alchemist”, Edward Elric is joining the Nendoroids! His fluttering red cape, blond ponytail and confident smile have all been captured in lovely detail! He also comes with alchemy effect parts that connect to his arms to display him just before transmuting something! ★

This was one of the items voted for during the Nendoroid 10th Anniversary Next Nendoroid Survey! Thanks again to everyone who voted!!

Along with the determined smile above, he also comes with two other face plates to bring out different sides of his personality! ((´д`●))三((●´д`)) He looks much more focused with this expression, with a tightly closed mouth showing his tougher side as he stands ready for combat! His iconic braided hair is connected with a joint allowing you to move it around to better match various poses!

He is so small and cute… which leads me onto the next face plate! “WHO ARE YOU CALLING SMALL?!“

An expression that just had to be included with Ed! It’s amazing how well this expression translated into Nendoroid form!! ♡

But anyway, let’s move on to the included accessories! First up, he comes with an alternate arm part that reveals his automail arm! The torn appearance of his jacket as well as the mechanical design of the arm have been sculpted in beautiful detail! ★

But that’s not the only alternate arm part he comes with!

“Didn’t I tell you? There is no comparison.“ He also comes with an interchangeable arm where his arm has been transmuted into a blade to fight with! (*´∀｀)ノ The automail parts all make use of a metallic paint that bring out that heavy, metallic appearance so effectively! But we’re still not done yet, Ed also comes with parts to show off one of his signature moves… Note that the bottom of the wall is made with translucent parts to bring out that transmutation effect that really captures the atmosphere of the series! ☆

This is how the pose looks from the side! The pose couldn’t be recreated with just standard Nendoroid joints but it was too important not to include, so an entirely separate lower body part and legs are included to pose him this Ed having a temper tantrum after someone has mistaken his brother for him or called him short!! When the kneeling pose is placed up like this it looks like he is jumping around and kicking in the air! It suits the angry expression so perfectly!!

As you can see you can enjoy all sorts of different sides of the Fullmetal Alchemist with the various included parts and face plates – be sure to add the cute little  Nendoroid to your collection!

He will be up for preorder from tomorrow!!

In addition, purchases from the GOODSMILE ONLINE SHOP will include a Spiked Bat & Hand Part to hold it as a bonus!! Also don’t forget that his brother will also be joining him soon!!
Nendoroid Alphonse Elric!