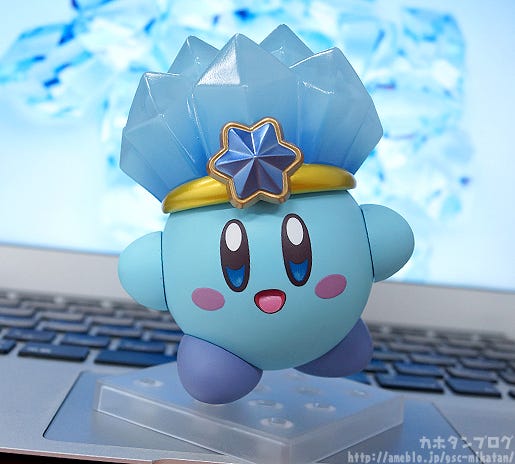 As we head into the hotter months of Summer I crave more things that have ice in them! I also crave pear-flavored things in the Summer! From the popular ‘Kirby’ game series which recently celebrated its 25th anniversary comes a Nendoroid of Ice Kirby! The Nendoroid makes use of a number of magnets to make his movements smooth, natural and easy to pose!

He comes with four different face plates including his standard smiling face, a more serious face, an expression with his mouth wide open to display him using his inhale ability as well as an expanded expression to show him filled up after inhaling! His ice crown can be removed to display the standard blue Kirby seen in various fighting games, and he comes with a collection of optional parts that allow you to display him with his ‘Parasol’ and ‘Fighter’ Copy Abilities as well as using his Star Bullet ability!

The original Nendoroid Kirby is also being rereleased at the same time as Ice Kirby’s release, and owning both of them allows for even more fun display opportunities. As a special bonus, Nendoroid Ice Kirby will also include a new additional sleeping face plate for Nendoroid Kirby! Be sure to display them together and bring out Dream Land in your collection!

The final version of the prototype was just revealed last week, and now he is ready to go up for preorder! Let’s take a look at the different face plates and accessories included!ヽ(●´Д｀●)ﾉ Plus as you can see he comes with ice effect parts under his feet to display him sliding along! ★ A serious face together with icy blowing effect parts to display him attacking with his ice powers! ♪

The puff of cold air has a translucent look with little snowflake patterns printed on the design! ▲ It looks so cute and fluffy! Ice Kirby looks just as cute all filled up! Not only does the expression change but so does the actual shape of his body! (*´ω｀*) I say “Inhaling Face”, but this Kirby also comes with effects to display him spitting out starts so in this case it is more of a spitting face! ♥

Plus as you can see from the above, his ice crown can also be removed for a more simply blue Kirby to enjoy! (σ・∀・)σ ▲ The final product will make use of rubber painting for a lovely feel and look!

But that’s not all!! Ice Kirby comes with a selection of new parts that being out Dream Land even more than before! (●‘∀‘●)ﾉ” Along with the version above, an alternate version longer handle is also included to recreate this pose! ( ･ㅂ･)و ̑̑ ｸﾞｯ ! Simply select the version that best suits the situation! ★ The headband blowing in the wind behind him gives Fighter Kirby an illusion of speed making for a rather dynamic looking pose! The arms and legs are attached with magnets allowing them to easily be switched into a more action-orientated pose like this! (∩・∀・)∩

The sleeping face is included as a bonus for the original Kirby! I want to have this adorable sleeping face by my side to look at whenever I need to de-stress a little!

The pink Nendoroid Kirby is NOT included with Ice Kirby!

Purchasing Ice Kirby will come with the following parts! ▲ All this plus a longer handle for the parasol! (｡･ω･)ﾉﾞ

Obviously the parasol and fighter parts can all be used on Ice Kirby as well! ▲ Together under the same umbrella! ♡ ▲ Now this face plate looks more like a shouting expression!

Kirby and Ice Kirby will be the same size, so all of the parts will be compatible with both of them! The same goes for this way around! ♪ Enjoy all sorts of different combinations and poses! (๑´ㅂ`๑)

Be sure to add the adorable, round and icy Nendoroid to your collection! Here is a quick string of photos stuck together to create a little story!

He really is so much fun to move around!! ♡

Along with Ice Kirby, we will also be rereleasing Nendoroid Kirby for those who missed out on him!

Make sure you don’t miss out this time!