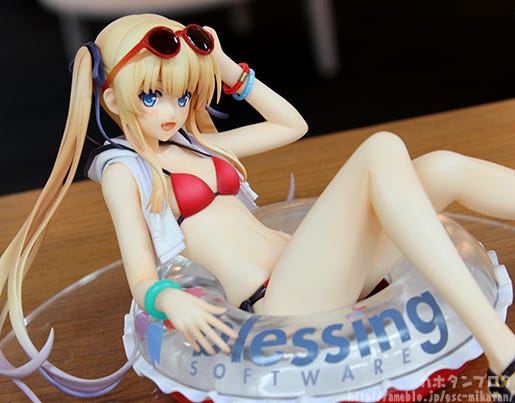 From the popular anime series Saekano: How to Raise a Boring Girlfriend ♭ comes a 1/7th scale figure of the up-and-coming doujinshi illustrator Eriri Spencer Sawamura wearing a swimsuit! The figure is the second in a series of figures based on original illustrations by Kurehito Misaki, each featuring the Saekano girls wearing their swimsuits.

Misaki’s delicate touch and unique coloring have been carefully preserved on the figure, while also capturing the slender and soft appearance of Eriri’s body with intricate sculptwork and paintwork. The top of the floating tube makes use of translucent parts allowing you to get a peek at her body through the tube as well.

Eriri is the second in the series of Saekano swimsuit figures based on illustrations by Kurehito Misaki! ▲The illustration she is based on is included as a postcard! ♪

If you count the non-swimsuit versions of figures based on Kurehito Misaki’s illustrations this is in fact the fifth figure in the series! ♪ Just like all the previous figures, the figure captures everything about the illustration and more in figure form! The look of the eyes and the blush on her cheeks… all the details of the face down to her cute moe fang have been captured perfectly! ♡

She is posed looking rather relaxed while sitting on a floating tube, and the balance and movement of her hair has been adapted to the sitting pose really beautifully! Even from the back the overall composition of the figure is stunning! (*’▽’) ▲ The unique gradient of her hair has also been
preserved just like on the illustration! ♪

Let’s take a closer look at various different parts of the figure! (ΦωΦ) I personally quite like the moderate size of Eriri’s chest! Perhaps just the right size for me… ♡

The soft looking, lady-like sculpt of the area around her stomach and hips is also just begging to be touched!! Just look at those lovely realistic looking thighs! When I look at a figure and think it looks just like a real body I can’t help but be in awe… ( ;∀;)

Another rather small thing, but still amazing… The fingers that gently brush against the tube have such a pretty look to them! The natural pink manicure has also been faithfully included on the design! ♪ The sculpt of the tube together with the fact that the top is transparent makes it look so realistic! It’s like it should be all soft and squishy to the touch!! I couldn’t stop myself and went ahead and touched it, but it was in fact just as hard as any other parts of the figure… (/ω＼) The fact that the top is transparent means you can in fact get a blurred look at what is on the other side of the tube! You can’t get a direct look when she is sitting in the tube, but this blurred look leaves some to the imagination making it all the more enticing! From the sunglasses in her hair to the bracelets on her arms, the details are magnificent all around! The glasses also make use of translucent parts allowing you to just slightly see the hair on the other side! ♪ The straps on her sandals have that shiny look showing the enamel material they are made from, and just like her fingernails her toes also have been painted a lovely light pink! Such a work of art!

Don’t miss out on this Eriri in her swimsuit! ♡

Plus there are still two more planned in the series! ヽ(´∀｀。)ﾉ･ﾟ.｡oO（The season for swimsuits is here!）