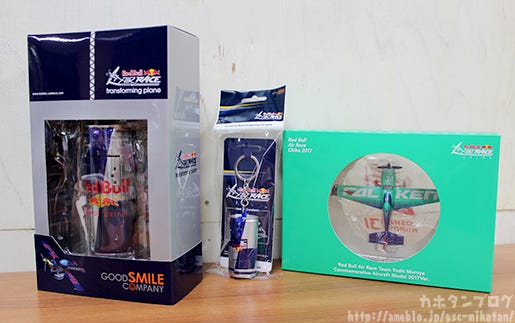 This weekend, the 3rd  – 4th June 2017 is the Red Bull Air Race Chiba 2017 taking place at the Chiba Prefecture Makuhari Seaside Park! We’re going to have a couple of limited items on sale at the event, so I thought I would give a quick look at them! The packaging makes use of the same light green used on the aircraft itself! The window on the back features a print of this year’s Team Yoshi logo. The included pylons simply need to be pushed into the little bases to complete a miniature track for the plane! ▲ The base includes the Good Smile Company logo as well as “2017” to give it that limited edition feel!

Depending on how you arrange the bases you can form all sorts of different air gates. ▲ Display two together like this for the start or finish line!

The entire model is around 10cm in width – around palm-sized and easy to put on display in various different places! We will also be selling two more Good Smile Company products at the event: In addition, there will also be a selection of Chiba exclusive goods produced by GSC! A rather simple design with different colored parallelograms overlapping for a stylish design that can easily be used when out and about! There is lots of space to carry any towels, drinks or anything else you might need when going to watch sports like the air race, with some extra space for souvenirs! A long towel perfect for events and festivals! You can wrap it around your neck like a scarf and wipe away and excess sweat! A simple yet stylish face towel to remember your time at the Air Race! The logo is included but rather small allowing it to be used for all sorts of things. A towel with a hood for shade! Helps against the harmful rays of the run while also giving you a way to dry up some of the sweat from the heat! It’s great for use at the event itself and can easily be used at other outdoor events as well! ▲The tag is proof of the event and is printed on nice and clearly!

If you are interested in attending the Red Bull Air Race Chiba 2017 you can still purchase tickets at the event! See below for more information on what to expect!

You can find out more on the official page below!