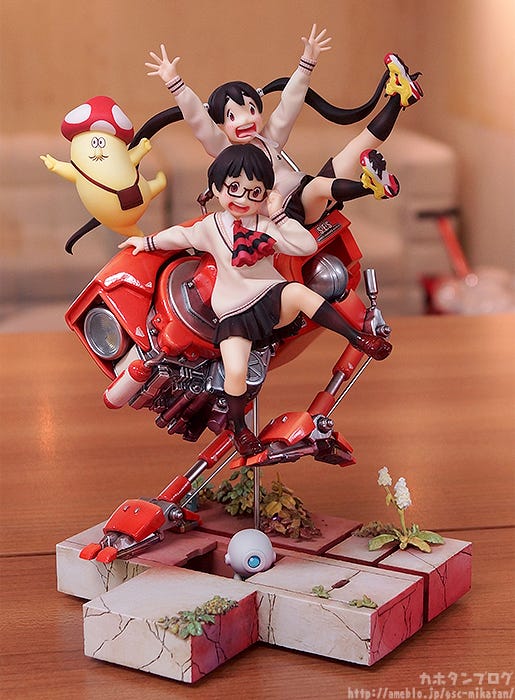 Can you believe we are already on the last day of May! Today I’m going to be taking a look at… The figure is based on an original illustration by the author of the manga, Inio Asano. His unique touch and the details on the background not only on the robot, but even on each of the leaves and tiles has been carefully sculpted to ensure a figure packed with incredible detail. The tiles of the base are also made to form the Japanese katakana “de” shape that is found multiple times in the title of the series. The figure will also come with a bonus short manga written by Inio Asano. It is the ultimate addition to the collection of any De De De De fan!

A vignette figure based on an original illustration by Inio Asano.

Apologies for the wait since it was revealed during the last WonFes! (/ω＼) The lively pose and dynamic appearance of the figure is such a pleasure to the eyes no matter what angle you choose to look from! It really is such a beautiful work of art! ♡

You’ll have to wait until she joins your collection to see certain angles that I can’t show though! (｀・ω・´)ゞ

Here is the original illustration that the figure is based on! You can see just how faithfully it has been reproduced in figure form! ▲ This is the first time the illustration has been shown!

The figure stands around 180mm in height! ▲ Size comparison with an iPhone6! So much detail in such a small space! Her red-framed glasses looking great! The swaying appearance of the ribbon on her chest is also a lovely point! The shiny appearance of her shoes has also been captured nicely, and I personally love the rather full look of her calves! ♥ Even the drool from her mouth has been sculpted on the figure! She is instead wearing rather functional, expensive looking sneakers which are also sculpted in intricate detail! His bizarre, plump appearance is so perfect! Although the entire figure is made from a hard material the contrast between the shiny metallic figure and the soft mushroomy look of Isobeyan really makes you expect that he should be soft to the touch! (‘-‘*)(,_,*)(‘-‘*)(,_,*) The robot everyone is riding on looks so realistic that it could just jump to life! ▲ All the details never visible on the original illustration are also faithfully detailed in a full 360° on the figure!

If we look a little from the bottom we get a good feeling for the impressive volume of the robot, as well as the fact that you can see all the structural detail inside the machine too! ▲The pole in the center is the stand for the figure!

It’s a little hard to tell from these photos, but all the warning labels and other stickers on the robot are also all faithfully included! Be sure to take a nice close look once the figure joins your collection! (*´ｪ`*) ▲ The mix of the characters, the robot and the base all merge together so well! If you look from the top, the base is in this shape: デ. This is the katakana for “De” ヽ(ﾟ∀ﾟヽ 三 ﾉﾟ∀ﾟ)ﾉ

The smaller details such as the flowers and the tin can that were all in the original illustration have been beautifully added to the base! ▲ The paintwork and detail of the greenery is also amazing!☆

Plus we also have a little intruder… It’s quite difficult to show the amount of detail of this figure with just photos, but those of you who want to see it in person and are in Japan… I have some goods news! The figure is currently on display at the De De De De POP-UP STORE taking place at Kinokuniya Book Store Shinjuku Main Store Annex 2F Comic Area! Be sure to take a look if you’re in the area!

The De De De De universe all squished into one figure! You can preorder from the GOODSMILE ONLINE SHOP here: http://goodsmileshop.com/en/p/GSC_WHS_WD_00009/

All purchases will also include an Original Short Manga by Inio Asano as a bonus! Look forward to it! (σ・∀・)σ