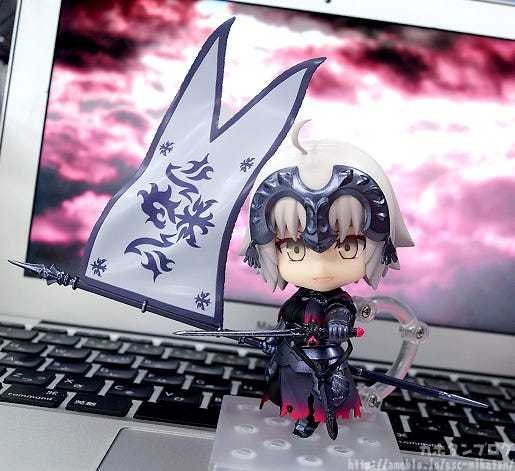 I can’t believe it’s already May! Just one more month and we are already half way through 2017! Anyway, today I’m going to be taking a look at… From the popular smartphone game “Fate/Grand Order” comes a Nendoroid of the Avenger-class servant, Avenger/Jeanne d’Arc (Alter)! She comes with three face plates including a fearless smile, an arrogant glare as well as an embarrassed expression.

Her iconic flag is included together with her black sword, flame effect parts as well as a special sheet to pose her preforming an “Extra Attack”. Enjoy recreating all sorts of scenes from the game in Nendoroid size!

“Applaud! Applaud for our hatred!!” Her black armor has been sculpted with such intricate detail! The red areas of the outfit are also faithfully preserved with a gradient effect. For a little figure that stands just 100mm in height her chest is rather impressive in size! Not to mention the little peek at bare skin on her leg in the photo above! Who said Nendoroids can’t be sexy!

Her black sword can be displayed sheathed away, but can also be drawn and displayed ready for combat… plus it even comes with flame effect parts for more intense combat scenes! (｡･ω･)ﾉﾞ The fiery sword shows off her strength as one of the most powerful servants in the game! ★ ▲ The flames use translucent parts and a gradient effect! So pretty!

Along with the standard confident smile you see above, she also comes with this haughty glaring expression! (/ω＼) ▲ The glaring expression looks great with the sword drawn! ☆

She also comes with another optional part which suits this expression really well… An Extra Attack Effect Sheet! ▲ The sheet comes with it’s own little stand!

This allows you to pose the extra attack flying through the air into her opponent just like in the game! By the way, as I’m sure you’ve noticed her iconic flag is included in a huge size! Here is a size comparison with mt iPhone6! ▲ Not normally a size you would associate with Nendoroids! The contrast between the darker glaring expression and the cuteness in this expression is almost too much for me!! (*´﹃｀*)

In addition, the Nendoroid features joints in the shoulders and elbows allowing for much more mobility! This is great for combat scenes, but also helps to create a more embarrassed looking pose as well!! ♥ ▲ Those troubled eyebrows and rosy cheeks!!

Enjoy proud poses, combat poses and even her cuter side! ☆ Keep your eyes on the Good Smile Company Website for more details!!

There are also many other FGO products currently up for preorder! Note that this week is Golden Week here in Japan, so GSC Customer Support will be unavailable for the rest of the week! The blog will also be on a little hiatus until next week, so see you all then!