May 1, 2017threezeroBy Kahotan
Check out more figures at the
Good Smile Company website! 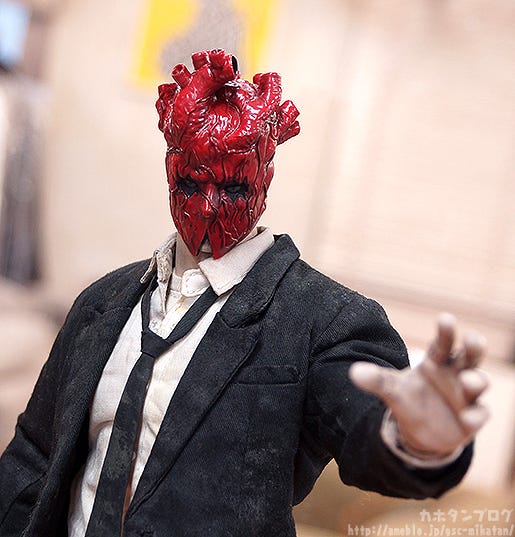 Today I’m going to be taking a look at this Dorohedoro action figure from threezero:

*The blog contains some rather grotesque images, so if you’re faint of heart turn back now!* Shin is an elite Magic-User and cleaner for the largest magic group in the Magic User World, the The En Family. Although he has powerful magic that allows him cut anything up into pieces, he generally prefers to fight in melee combat with a hammer. His most characteristic feature is the heart-shaped mask over his head.

From the dark fantasy manga that has been serialized since 2000 comes an action figure of Shin! The figure has been sculpted by the renown Masaki Apsy in 1/6th scale which makes Shin stand approximately 32.5cm in height, showing off his impressive height and large build. He comes with two interchangeable heads – one with his head masked and another showing his face with a blank expression. He also comes with glasses which can be work on the normal face.

The tailored suit jacket, suit pants, dress shirt, necktie, and T-shirt are all made from fabric, and all have a worn, used appearance to them. He also comes with a hammer (with a chain and hook) as a weapon, as well as three pairs of interchangeable hand parts. Various pieces of Cross-Eyes sliced up by Shin’s magic are also included, as well as two black garbage bags to place the pieces in!

An action figure of the cleaner ‘Shin’ from the dark fantasy manga series Dorohedoro!

Let’s start off with a look at the more mild parts of the figure! That said anyone who hates seeing stitched skin will even find this area quite grotesque! The sculpting of this figure was done by none other Masaki Apsy famous for his work on the figma series!

Just looking at the one hand you can see the attention to detail! Not only on the stitching but the back of the hand with all the little ups-and-downs from the veins and bones! The shoes also have the stitches ad laces very carefully sculpted onto the figure creating a very realistic appearance! The dirty and damaged effect brings out the realism even more!! His outfit is made from real fabric, but the body and limbs are all a complete action figure allowing you to enjoy all sorts of different poses! Anyway, I think that’s enough of the more gentle stuff, let’s move on! The heart-shaped mask he wears as well as a Cross-Eyes member torn apart while alive is also included for him to hold! In the other hand he holds his trusty hammer as he stands wearing a rather contrasting formal suit and tie!

This is actually the second figure from the series following on from the previously released Caiman! ☆ ▲ Caiman was released in November 2016

Caiman stands around 360mm  in height while Shin is about 325mm showing the size difference between them! (°Д°；≡°Д°；) Just like the Caiman figure, Shin comes with joints included in his shoulder and elbow allowing for an amazing amount of movement! You can easily recreate certain scenes from the series or even create your very own original poses! ☆

The face on the back of the mask has also been included in gruesome detail! (´□｀｡) From the back the dirty appearance of his suit is very clear, but perhaps what stands out the most in this photo is the spinal cord of the head he carries…!

The head is from a member of the Cross-Eyes that had his body unfortunately pulled apart while he was alive… which is why you can see his eyes are still shiny with a glossy paint! ヽ(●´Д｀●)ﾉ ▲ The teeth and gums are so detailed…!

The head comes with two different hair parts – one for being held by Shin and another one to simply display lying by his side! He also comes with two black garbage bags so you can wrap the head parts away in them if you like!

He also comes with a slightly less grotesque option! His unmasked head is also included!! ♡ ▲ The wrinkles on his face are so impressive!

In addition, you can also remove his glasses for a different look! ▲ He looks a little younger without the glasses! (/ω＼)

You can find many more photos over on the GSC product page!

Add the Elite Magic-User to your collection!
The Action Figure Shin!

There is also a limited edition version which comes with the following items: ▼This can be combined with the head part like so! ♪ Be sure to consider adding him to your collection! ☆

If you are in Japan, you can preorder this product from the GOODSMILE ONLINE SHOP up until the 2nd August 2017 at 21:00JST! Make sure you don’t miss out!

Those who are not in Japan can instead look to purchase this product as well as it’s limited edition from the threezero store: http://www.threezerohk.com/