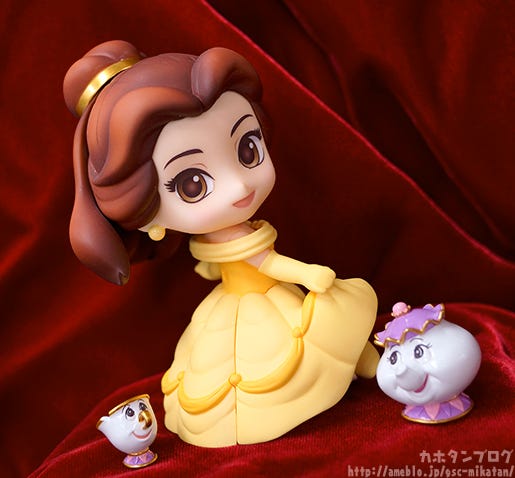 My craving to go to Disneyland has recently been on the rise. Every single time I visit I have to go and watch PhilharMagic!! I love it!!

Anyway, today I’m going to be taking a look at…
Nendoroid Belle! From Disney’s animated feature film “Beauty and the Beast” comes a Nendoroid of Belle! She comes with two different face plates that both capture her personality and allow for all sorts of cute and fun poses!

The figure has been sculpted wearing the memorable yellow dress from the ballroom scene, which has been carefully converted into Nendoroid size and painted with great attention to detail. Combined with the two different face plates, the Nendoroid allows fans to create various different situations in Nendoroid size.

Optional parts include both Mrs. Potts and Chip, as well as the enchanted rose and the magic mirror that showed the Beast. A clear sheet featuring the Beast is also included together with a stand to display beside her. Be sure to add this adorable Disney Princess to your collection!

The Disney Princess who wished for adventure like those in her beloved books.

With the recent live action film, “Beauty and the Beast” is as popular as ever, and now the classic animated version of Belle is even getting an adorable Nendoroid figure!!

Belle is one of my favorite Disney Princesses so I was really excited to hear she would be transformed into a Nendoroid!! She has that gentle Princess touch but also has the charming aspect of being a daydreamer!

Belle is one of many Disney and Pixar Nendoroids that were announced during the 2017 Winter Wonder Festival! There are still many more characters coming to join her! ★ But anyway, let’s get back to Belle!♪ Belle has her hair tied up in a mature yet cute style, and her lovely yellow dress has many drapes that have been carefully converted into Nendoroid size!

She comes with an interchangeable skirt part which allows you to pose her pinching the end of her dress to recreate this classic pose! (∩・∀・)∩ ▲ Even the frills on the inside have been carefully sculpted! ♪

The figure also comes with a lovely selection of accessories and parts to display together with Belle herself! Let’s take a closer look at them one by one! The shiny paintwork makes them really look like ceramics!

The wide open eyes also give them both such a cute look! The designs have been slightly altered to better match with the Nendoroid design, but even so just having them beside Belle really helps to bring out the atmosphere of the series!  (*´ｪ`*) My favorite shot! You can pose Belle holding the rose like so!♡

The glass case that holds the enchanted rose in the film is also included, allowing you to instead simply display the rose by her side as a decoration instead! ▲The rose inside the case makes for a very different atmosphere! ▲ The reflective side of the mirror shows Beast! Beast is also included on a clear sheet!  (ฅ^･ω･^ ฅ)

He comes with his own little stand to allow you to pose Beauty and the Beast together in Nendoroid size! Even the height difference looks great! I can just picture the ballroom scene in my head…

Be sure to add the beautiful Disney Princess to your collection!
Nendoroid Belle! While I am looking at Nendoroid Belle, another item that is scheduled to be rereleased in May came to mind, so I thought I’d take a quick look at it! You can connect the two sets together to create a complete room! Combined with all the accessories included with Belle herself it really brings out the atmosphere of the series! ★ ▲The red carpet suits her so well!