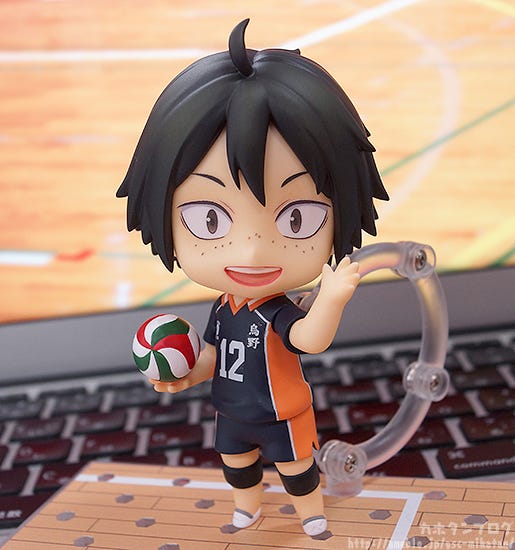 I like my french fries freshly fried! I tend to eat two or three at once and feel a little extravagant! *nom* (๑´ㅂ`๑) *nom*

Anyway, today I’m going to be taking a look at…
Nendoroid Tadashi Yamaguchi! From the popular volleyball manga series with an equally popular anime, ‘Haikyu!!’, comes a Nendoroid of the Karasuno High School Volleyball Club’s pinch server – Tadashi Yamaguchi! He comes with three face plates including a standard expression, the serious expression he had when performing his well-practiced jump float serve as well as a smiling expression.

The Nendoroid allows you to recreate a number of memorable scenes from the series and also comes with a volleyball as well as a special base made in the image of a volleyball court. He also comes with a his favorite snack, floppy fries! Be sure to display him with the other characters from the series and create all sorts of fun situations in Nendoroid size!

“What more do you need than pride?!”

This is in fact the 12th Nendoroid from the series! I look forward to seeing who will be next! ヽ(*´∀｀)ノ

But let’s head back to Yamaguchi! ▲ Posed calling out to Tsukki!

His rather unkempt hair with a tint of green and his freckled face have all been faithfully converted into Nendoroid size! The open mouth with his top teeth showing is so very cute too!! ★

Along with this standard smiling expression above, he also comes with a more serious expression for when he is in a match, ready to perform his jump float serve!! (｀・ω・´)ゞ Making use of the Nendoroid stand you can pose him just before he strikes the ball!!

Bent arm and leg parts are also included which can be mixed and matched to recreate all sorts of different scenes both in volleyball matches and for more casual scenes!  (੭ु ›ω‹ )੭ु⁾⁾♡ ▲ The contrast between his smile and this expression is lovely!

The word Yamaguchi says most often in a day is said to be “Tsukki”, so it only makes sense to display him together with Nendoroid Kei Tsukishima! * Yamaguchi is a prototype and Tsukki is a final product making the sizes slightly different.

You can easily pose Yamaguchi boasting about Tsukki’s amazing talent! His third expression is this lovely cheerful expression! ♪

It’s perfect for these scenes with Tsukki, but can also be used for all sorts of other situations as well! I can just imagine a victory pose with that smile as well!! ▲ You can see the floppy yellow sticking out above his shoulder!

He comes with his favorite food: floppy fries !ヽ(●´Д｀●)ﾉ Another item that matches with his smiling face plate perfectly!! Each and every one of the fries has been sculpted with a lovely floppy appearance to ensure he is happy!! ε=(｡・д・｡) ▲ The fact that he is holding it with two hands is also cute!

▲ Just looking at this brought a smile to your face!

Be sure to add the hard working blocker to your collection!
Nendoroid Tadashi Yamaguchi!

He’ll up for for preorder from tomorrow!

Be sure to keep your eyes on the Good Smile Company and ORANGE ROUGE websites for more information!

In addition, orders of this item from the GOODSMILE ONLINE SHOP will come with this Nendoroid Plus Rubber Strap: Tadashi Yamaguchi Karasuno Volleyball Club’s Pinch Server Ver. as a bonus! ♪ Plus don’t forget that there are already other members that have been announced! Be sure to keep a look out for more updates!