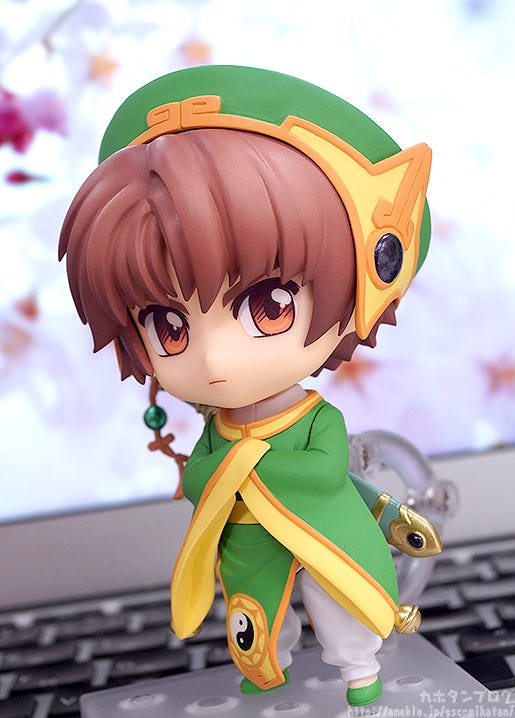 I’m really terrible at sewing. I remember back when I was a student I made a scarf in class and it ended up too short to even wrap around my neck once. I can’t even imagine sewing together a complete teddy bear! From the famous Cardcaptor Sakura series which currently has an all new “Clear Card Arc” being serialized comes a Nendoroid of Syaoran Li! He comes with three face plates including an aloof standard expression, a shouting expression for combat scenes as well as a bit of an embarrassed, blushing expression!

Optional parts include the charms he uses for elemental magic as well as a sword that can be displayed both drawn and sheathed in the included scabbard. Be sure to add the cute Syaoran to your collection!

From the series that has been loved by fans for years on end, “Cardcaptor Sakura” comes a Nendoroid the distant relative to the powerful magician Clow Reed who transfers to Japan from Hong Kong to collect the Clow Cards – Syaoran Li!

He was one of the Nendoroids that received a large number of votes on the Nendoroid 10th Anniversary Next Nendoroid Survey, so I really think the fact that he was finally able to join the Nendoroids was thanks to the fans love and support!! A big thank you to everyone, as it was a figure that I personally really wanted too!! (✿´ ꒳ ` )

On top of that we have the all new series, a rebroadcast of the anime and the recent birthday event… it’s such a great time to be a Cardcaptor fan!

But anyway, let’s get back to the Nendoroid!! ♪

First and foremost let’s take a look at the face plate that above, which is his rather aloof looking standard expression! His green outfit has also been converted into Nendoroid size with careful attention to detail! (｡･ω･)ﾉﾞ His sword and scabbard are can be held in place with the Nendoroid stand, allowing you to pose him as if carrying the sword on his back! The bells on the bottom of his outfit as well as certain areas on the sword make use of a metallic paint to better capture the different textures!

Included to pose with him is one of his charms… ▲ Includes an special hand to display him holding it! ♪

As well as his sword removed from the sheath! These parts can be used with the included shouting face plate to recreate all sorts of combat poses! I posed him here in a pose just before he uses his standard lightning spell! (●‘∀‘●)ﾉ”

In addition, the Nendoroid also comes a bent leg part which you can mix and match with other parts to recreate various different action scenes! The sculpt of the outfit also has a bit of a dynamic sculpt to it in order to match up with the more action-orientated poses! (∩・∀・)∩ When I had to select a third face plate for Syaoran it was such a difficult choice to make! I went back and reread all the volumes of the manga paying close attention to his facial expressions!

The arguing expressions when he was talking with Toya, the gentle smiling expression with confident eyes… there were so many options, but in the end the scene that had always stuck in my memory was this expression from volume 9 in the manga, where he first becomes aware of his feelings for Sakura-chan while walking with Tomoyo-chan… (/ω＼) ▲ Syaoran is a prototype while Sakura-chan is an actual product, making the sizes slightly different!

I’m go glad I can finally display the two of them together like this!! ( ；∀；)

Plus we also have… Tomoyo-chan ready to snap some pictures of them! (I think Tomoyo-chan and I are feeling the same happiness right now!!)

If you display Sakura-chan with her excited expression and Syaoran blushing you can imagine that they just met Yukito! ヽ(ﾟ∀ﾟヽ 三 ﾉﾟ∀ﾟ)ﾉ Although they are in their battle outfits, the expressions are still more than enough to tell a little story! ✿

Displaying Syaoran alone is of course amazing in itself, but I highly recommend posing him with the previously released Nendoroids and Nendoroid Co-de from the series to recreate all sorts of different situations from the Cardcaptor Sakura universe! ヽ(*´∀｀)ノ

By the way, Syaoran’s hat can also be removed! Simply select the pose, face plate and parts that you like best and pose Syaoran in all sorts of serious, gallant and cute poses!! ♡

Be sure to add the adorable Syaoran-kun to your collection! He is up for preorder later today!!

In addition, purchases from the GOODSMILE ONLINE SHOP will include this Special Compass Base Sheet as a bonus! This can be placed on the Nendoroid stand like so to bring out the atmosphere of the series even more! ♪ Be sure to consider it when preordering!! ★