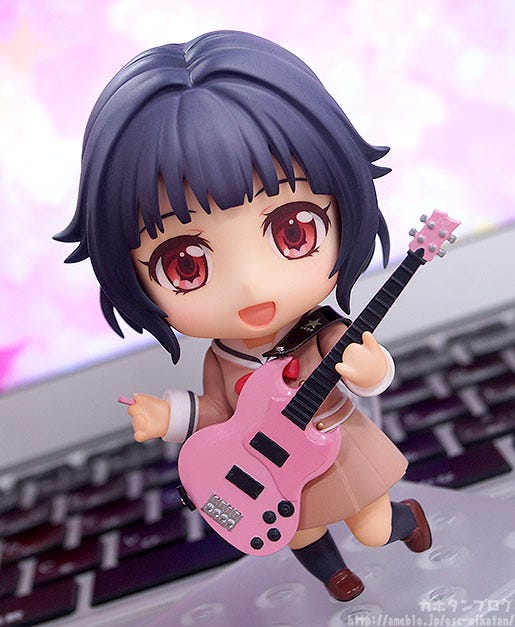 I have sweet breads for breakfast nearly every day! Recently I’ve become quite attached to melon pan! It’s most delicious after 0 seconds in the microwave! It’s magic!! Anyway, today I’m going to take a look at… From the anime series BanG Dream! comes a Nendoroid of Poppin’Party’s bassist, Rimi Ushigome! She comes with three face plates including a standard expression, an innocent expression with her mouth open and an expression with upturned eyes.

Optional parts include a bass guitar to display her performing live, as well as a case for the guitar allowing you to display her on the way to and from practice. Be sure to display her with the previously announced Nendoroid Kasumi Toyama and Arisa Ichigaya to recreate all sorts of different situations in Nendoroid size!

“I was a little scared… but it was fun! I want to join the band!”

She is the third Poppin’Party member to join the Nendoroids! ♪ ☆ *CURRENTLY UP FOR PREORDER* ☆ Anyway, let’s get back to Rimi-rin! ♪ She comes complete with the bass guitar that was handed down to her from her older sister Yuri! The amount of detail on the pink and black design is amazing! Her characteristic bobcut hair with slightly longer sides has also been very nicely preserved in Nendoroid size! (´□｀｡)

Up until now I have only shown her cute smiling face, but let’s take a look at her alternate face plates! The first of which is this one!

A cute, innocent face with her mouth open! ♡ The childish look that the open mouth gives her makes her look so very adorable!! It makes her look like she is carefully concentrating, making sure that she captures the right notes for her performance! A cute expression with upturned eyes! ♥

At first I thought she would come with a more standard smiling expression similar to Kasumi and Arisa… but this suits her character so much better!! An excellent choice by the product’s planner, Chii-chan! (@gsc_chii) (｀・д´・；)

Rimi has a timid personality that makes those around her want to protect and care for her… and this expression just brings out that feeling tenfold!!! I would be happy to bring her delicious bread from Yamabuki bakery every day! With that said… Rimi-rin also comes with her favorite bread from the bakery, a chocolate coronet! (੭ु ›ω‹ )੭ु⁾⁾♡ ▲ Enjoy a delicious bite together with Rimi!

Posing her with the bread allows for a more relaxed, everyday scene! I’m sure it will be fun to pose her like this together with the other characters for a change of pace from their performing poses! ★ Plus there is still one more optional part included! Similar to the previous characters in the series she comes with a case for her bass guitar! ヽ(*´Д｀*)ﾉ ▲ You can even see the “ESP” letters on the case!

This means you can not only pose her during a performance, but you can also pose her walking to and from practice, carrying the bass guitar on her back! ▲ The pointing finger and bent arm allows for cute poses like this! ♡

Be sure to enjoy Rimi in all sorts of situations with the various parts!

Be sure too add Poppin’Party’s bassist to your collection! She will be up for preorder from the 19th April! ♪

Plus purchases from the GOODSMILE ONLINE SHOP will also include a Special Background Sheet for Nendoroids (Sunset) as a bonus! The three Nendoroids so far on their way home after school! ☆ Plus as I already mentioned, don’t forget that Nendoroid Arisa is still currently up for preorder! ♥♡

Also be sure to take a look at the promotion video for her below!