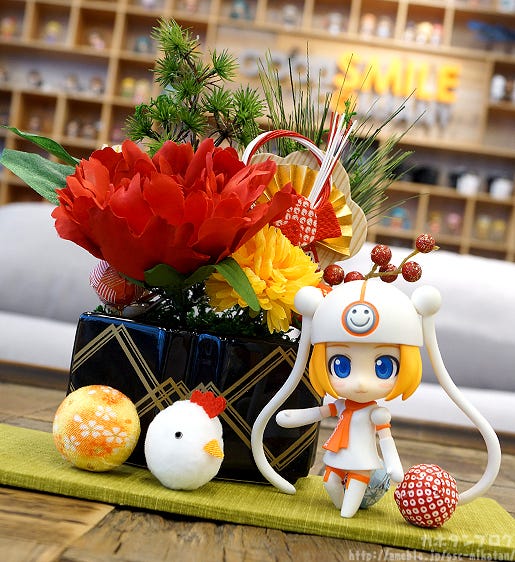 Wishing everyone a happy 2017! I hope everyone enjoys Kahotan’s Blog this year!

2017 has only just begun but already all sorts of things have been announced for the new year! I’m sure we are set for an amazing year! This year the blog will continue running the same as last year, with a total of three people writing articles for the blog – the other two members were introduced last year in the blogs below! ♪

Suwabe (@gsc_suwabe) will be writing a blog around once a week, while Chan-shuu (@gscs_hirase) will be adding a blog about twice per month! Today I’m going to be talking with the two of them on their thoughts of writing for the blog last year! (●‘∀‘●)ﾉ”

First up, the blogger who focuses on ORANGE ROUGE items with lovely photos and writing filled with passion – Chan-shuu-senpai! ▲ Looking into the eyes of Nendoroid Sayo on the GSC site!

◆ How was writing for the blog?

I love figures, and I actually joined GSC due to my love of figure photography – it’s hard to call writing for the blog a job as I enjoy it so much it’s pretty much my hobby!!
The official product page on the GSC site often doesn’t quite capture everything I want to express about certain figures – specific poses, where the sculpt was specially detailed or various other little details – the blog allows me to point those out and share them with everyone which makes it really worthwhile for me.
It has been a really enjoyable experience! My blogs come at rather random intervals, but I hope to show off all sorts of figures throughout the year, and I hope everyone will enjoy reading the blogs that I write!

◆ Which photo from last year that you took do you like the most? We announced the 1/8th scale Okurikara just after the rainy season in Japan. I often went outdoors and took photos of Touken Ranbu figures around that time and always tried to aim for a sunny day to get the best photos possible. This was the one time when I decided to take a photo out on a more cloudy, rainy day.
The photo captures the rather dull weather with a moss-covered stone lantern in the background, creating a scene as if Okurikara is sheltering from the rain – doesn’t he just look breathtaking!

As a side note, Chan-shuu also works as the photography director for many of the official photo shoots for GSC figures – in other words, most of the photos you see on the Good Smile Company website all involve his ideas and direction for the posing, backgrounds and angles of the photos! ▲ Back taking photos of the Sakura Kinomoto: Stars Bless You figure!

（´-`）.｡oO（Whenever I look at the photos of Sakura-chan on the GSC site I always remember the passion that GSC put into these photos!)

Next up, we have Suwabe – the blogger with a huge amount of energy who takes lovely photos to show off the charm of all sorts of figures! ◆ How was writing for the blog?

I can’t believe it has already been more than half a year since I started! Time really flies is the first thing that comes to my mind!! But to put things really simply, I really enjoyed it! I think I brought a new element to the blog for fans to enjoy!
As a member of the Corporate Planning Division I never really got much of a chance to see the final prototypes of figures – so being able to see them, play with them and take photos of them has really been an great experience that allowed me to open up my more creative side at work. I wanted all the fans to read the blog if possible, and so always tried my very best to write a blog that everyone would find enjoyable!
At the end of last year I have reached 34 blogs, but it honestly only feels like I’ve written 10 or so. I need to continue writing to gain more experience and make the blog even more enjoyable for everyone out there who is reading. I will try my very best this year an even better blogger and I hope everyone will be there to support me along the way!

◆ Which photo from last year that you took do you like the most? I picked this photo based on the Japanese saying ‘Never forget your original resolution’. These were the very first figures that I photographed for the blog myself – although when I look back on them now I can already see that the colors and composition could definitely use some improvement…
But that said, the one thing that has become clear to me is that you can leave me with all the figures that show off lots of skin! This was the first of the sexy figures that I reviewed on the blog, but I think they really helped to build by ‘character’ as a blogger, and so they really stick in my memory.
When I looked up the exact meaning of the saying ‘Never forget your original resolution’ – it isn’t just about remembering how you wanted to begin, but it is also about remembering the embarrassing parts of the time that you were still inexperienced. I know that I still have a lot to learn, but I intend to continue forward without forgetting the embarrassing parts in the past, and instead not worrying about that and simply challenging myself to write the most enjoyable blogs possible!!

Suwabe is perhaps best known on the blog for the excitement she shows in her blogs (particular when it comes to sexier figures), but I also wanted to see what kind of photos she has when they are not figures! Thus I asked for one photo from her everyday life to share on the blog as well! (･∀･)

I searched my photos for quite a while but there really wasn’t anything all that interesting… in fact I kind of came to the realization that I don’t really take that many photos outside of my work life!

But here is a photo from a stage performance that I was invited to by one of my friends – the first I ever attended! Eita-san sang magnificently making it a performance to be remembered! Not a person or thing… but a photo of a poster!!

I hope everyone is looking forward to her blogs this year!ヽ(*´Д｀*)ﾉ