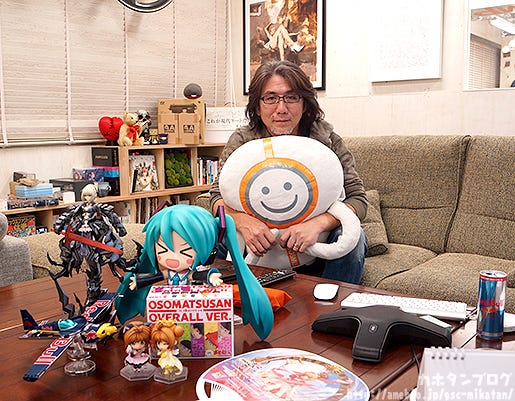 As with the previous few years, today I’m going to have a talk with the Good Smile Company CEO: Takanori Aki! The topics will all be related with things that GSC was involved with over the year! Just a fair warning – the interview is a bit long!

Well first of all it was a big move for us at Good Smile Company as we moved the offices over to Akihabara. That said Akiba really is perfect for us – we have everything we need here.

We can go out and buy any materials or references in a few minutes and it market research can be done right in our backyard. But most importantly we feel much closer to our fan base! Akiba is really the ideal place for the company.

It really does fit perfectly! The move was right before WonFes as well which made it all the more stressful… but now that it is done and dusted it just makes so much sense for a figure maker to be right in the heart of anime and game culture! Plus there are so many more places to choose to eat at now, which I’m very happy about! After the move we have also been very busy with various customizations to the building. The first floor is currently also being renovated, and should be something interesting for everyone to see in 2017!

The inside of the offices have also changed a lot and we get some rather interesting things going on sometimes!

The 6th floor was rather empty when we first arrived here but at some point there was a tent put up right in the offices, and then some fancy lighting got put in… Now we have shelves filled with figures for guests to look at! We also got all new desks and chairs for the area!

▲ Back when the mysterious tent appeared in the offices. ▲ This is how the 6th floor looks at present! (The tent is no more…) The event feels like it took place ages ago! Why exactly did we decide to have a live concert for the 10th Anniversary?

We have released so many Nendoroids now and the amount of series that are related to the Nendoroid brand have increased exponentially over the years. We wanted some way to celebrate and share this growth with the fans, and the best idea that came from that was organizing a concert!

Events like concerts allow you to share your passion in real time with similar fans which always makes for an enjoyable time!

I remember listening to ‘Star!!’ at the concert and crying!! It was a really touching event!! But that wasn’t the only anniversary to celebrate this year!

It was also the 15th anniversary of Good Smile Company itself!

One of the many projects we organized for the 15th Anniversary was Sakura Kinomoto: Stars Bless You! When we first had the prototype on display at animate Akiba Culture Zone we received a warm response from both Japan and out overseas and it really become such a wonderful memory for me!!!  (´□｀｡) ▲ You can read my blog review of the figure here!

Yep. We also had it on display in Los Angeles as well as in Shanghai… this summer was the summer of Sakura-chan!

▲ You can also go on a virtual walk around the exhibit here!

Over 1600 figures all on display at once… it was quite the mission to get them all together and on display! *laughs*

The biggest thing to me about this event was the fact that I have looked over every single one of these figures from the prototypes to the final products. Looking over them I can tell you who sculpted most of them, which factory they were made at and even which figures had the production team up all night to get them finished. There are so many stories and memories within the figures for me.

I could see how dome of our sculptors have grown through the years which gave me a completely different experience to most people who came to the event – but it was such an enjoyable event for me all the same. I’m glad that everyone else who visited also seemed to enjoy it too!

In other words it wasn’t just the history of GSC’s figures, but also a place to remember all the people that have worked on the figures that also have a special place in the company’s history!

The 15th anniversary year was also filled with many new challenges! One of which was the hand puppet series that aired in summer this year – Thunderbolt Fantasy Sword Seekers!

We worked on Thunderbolt Fantasy Sword Seekers together with PILI in Taiwan as well as with Nitroplus who work in the same office building as GSC.

The fact that it was all puppets made for an interesting change and the fresh feel that came from it being made with help from across the ocean in Taiwan made it an amazing experience. What a great series it was! I still remember how thrilling it was to watch the completed first episode!!

We had seen the first episode a huge number of times during the production stages, but for some reason I could never get bored of watching it.

It really draws you in to the style so nicely, and Urobuchi’s story together with the fresh style of puppets comes together to create a nostalgic yet completely new genre. I hope those who watched it could appreciate the different kind of potential it holds compared to other genres like anime.

I agree! It also allowed for so many unique experiences working together with the PILI team in Taiwan! Thanks to the fans who supported the series there is also a second season on the way, and I am already looking forward to working on it! The next challenge GSC took on was our jump into the world of gaming with the smartphone game ‘Grand Summoners’!

Grand Summoners has just started this December, but there are many plans for it throughout 2017 so be sure to give it a try! Playing with others through the multiplayer system is always such an enjoyable time!! We also have some plans for some other games, so look out for more news on that side as well!

There are a couple of Good Smile Lab blogs about the game, so be sure to take a look if you want to know more! They are only in Japanese though!

How about when Japan’s Yoshihide Muroya takes first place at the Japan leg of the Red Bull Air Race! That was one for the history books. The first day of the event was unfortunately bad weather which seemed like it would kill the mood of the event, but when Yoshihide took first place in his own country it really became an event to remember! We are already preparing for the next Red Bull Air Race in 2017!

What are your thoughts on the figure market of 2016? Looking over the year as a whole, the overseas market definitely seemed strong in 2016. I believe that the ‘otaku’ industry as a whole has been working on the overseas markets for a long time and the seeds have finally bloomed for harvest. I also get the feeling a lot of the series have also started to take note of their overseas fans and tune the content to better appeal to them.

How much does that change things for a figure manufacturer like GSC?

Well, GSC is becoming much more aware of this expansion in the market – it’s not like we are becoming completely reliant on the overseas market, but we definitely are paying more attention to our fans all over the world and not just those in Japan.

When looking at which content to add to our line-up we naturally start with series that will also reach the markets overseas. On the other hand we also have items that are only sold overseas – we were able to work on big names such as NARUTO for our overseas fans.

I also get a very strong feel for the overseas market growth when we rerelease older items! (｀・ω・´)ゞ Overseas fans will often preserve the popularity of series that have already calmed down in Japan, and they help keep the charm of these older series alive – as well as the figures that are made from them! We try to find the items that are back in demand and get them out to the fans.

Often the prices of these rereleased items need to climb up a little bit to match with the current times – but we try to keep the prices as close to the original as possible so that more fans can enjoy the figures for a fair price! Next year will once again be filled with all sorts of turning points! For example the Hatsune Miku GT Project is reaching it’s 10th season… and the 2017 Racing Miku is illustrated by none other than Tony-san! We’ve been walking a long path together with Miku-san, and I hope to celebrate her 10th anniversary in style! Look forward to it!

Hmm… is something in the works already?  ヽ(ﾟ∀ﾟヽ 三 ﾉﾟ∀ﾟ)ﾉ

Another big thing for 2017 is the Little Witch Academia TV anime starting in January!!

Ever since the first short episode was made for Anime Mirai, the popularity of the series has been known, and now it’s finally becoming a full anime series!

I really hope many people have this one on their watch lists – I’ve already been lucky enough to see the first few episodes through production and they are really amazingly done!! I can’t wait for everyone to see them!! *laughs*

I never though I would be working on a radio as a figure manufacturer, but we are helping out in various different fields and overcoming challenges with some amazing minds and the project has been a very fulfilling experience. Yet another product that was born from the passion of fans.

Sales for the radio have been announced for Spring next year, so look forward to it!! (｡･ω･)ﾉﾞ

2016 was the Nendoroid 10th anniversary as well as the Good Smile Company 15th Anniversary – there were a lot of challenges we faced through the year, but you can be sure that we will face any and all challenges that come in 2017 as well and will strive to being everyone all sorts of excitement throughout the year!

I will also be striving to bring out the charm of all sorts of things on this blog and Twitter!!

That beings us to the end of the interview!!

Thank you for all your support this year, and I hope you’ll continue to read the blog in 2017!!