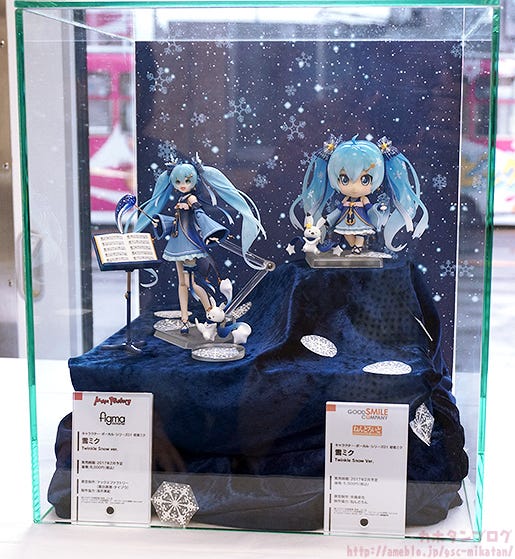 The theme for the 2017 Snow Miku was ‘Stars and Constellations of Hokkaido’s Winter’! We received a huge selection of entries for the design, but the winner this time around was this lovely illustration by Nishina! In addition, we also got this adorable design for Rabbit Yukine illustrated by LF to display together with Snow Miku! In the past, all the votes for these outfits were done on a livestream on NicoNico Douga, but this time around we made a special site to vote allowing fans all around the world to get their votes in! ♡

A big thank you to everyone who voted!!

Let’s take a look at how the figures have turned out this time around… starting with the Nendoroid!! ♪ヽ(ﾟ∀ﾟヽ 三 ﾉﾟ∀ﾟ)ﾉ This Winter, Snow Miku will descend from the starry night sky!

This year’s Snow Miku has been sculpted by GSC’s Takuya Ichihashi! She has such a romantic and yet still so cute appearance to her!! The soft, airy design of her outfit with long sleeves and lovely frills, her sparkling twin-tails and those ribbons in her hair with a music score written along them… the details are amazing!!

She also comes with a magical baton to display her conducting a Winter symphony! ♪ There are also a lot of parts that bring out the ‘starry sky’ theme nicely!

Moving on, we also have… This innocent Snow Miku with a brilliant smile on her face brings out that fairy-tail atmosphere so well!! The music stand and sheet music included with her are so amazingly detailed, and the winking expression on Rabbit Yukine’s face is also a lovely touch! ♪

Plus, she also comes with this!! A special crescent-moon shaped base!! ☆

Other accessories and expressions will also be included, so stay tuned!!

Look forward to a romantic evening under the stars with Snow Miku figures this winter!!

These two items are currently being displayed in the Snow Miku 2017 Train currently on display in Hokkaido! The planner behind the figure Hamako went down to Hokkaido to take some photos of the bus as well as the display inside! Take a look! ♡ The train features photos of Nendoroid and figma Snow Miku as well as all new illustrations by the comet!  Just look how cute this main visual of the 2017 Snow Miku is!! ♡ ▲ I’m sure this train will take me away to a romantic star filled sky!

Inside the train you’ll find both figures on display! ヽ(´∀`｡)ﾉﾟ ▲ The display case even follows the starry skies theme!

From their intricate hair sculpts to the details on the cute little outfits! There is so much to enjoy on both of the figures!! I can’t wait to add them to my collection!!

The adverts inside the train are also all Snow Miku related! ☆ ▲ An advert for a DIVA Module too! ♪

The 2017 Snow Miku will also be transformed into…
A DIVA Module for the games!! She has such a magical charm to her!!

Once she has been released you will be able to use her in your favorite songs in the arcade game! ▲ Keep your eyes on the Weekly DIVA Station for a schedule!

Plus this time around we were once again visited by this special guest… Snow Mikudayo-san!! This streetcar will be actually used on the rails in Hokkaido from the 21st November until the 26th March 2017! Be sure to keep an eye out for it if you’re in the area! (●‘∀‘●)ﾉ” Anyway, let’s move onto how you can add these figures to your collection! There are a couple of ways!

In order to purchase at this event you will need to apply for an exchange ticket beforehand.

Please note that sales at this event require you to apply for an exchange ticket. These tickets will be distributed through a raffle system.

If you are selected to receive an exchange ticket, you can receive your product at the following times at the event!
YOU HAVE TO BE AT THE EVENT TO EXCHANGE YOUR TICKET FOR THE PRODUCT.

* You will be required to select the exchange time from the above six options.
* You can apply for a ticket multiple times, but may only exchange one ticket per person at the event.

*Please ensure you were selected to receive an exchange ticket and confirm the time and date before arriving.
*You CANNOT exchange the ticket for a product after the event.

Inquiries Regarding the Exchange Ticket System

Both of these products will be on sale at the WONDERFUL HOBBY LIFE FOR YOU!! booth on the 19th February 2017.

More details will be added on the official site below at a later date! Stay tuned!

⇒ WONDERFUL HOBBY LIFE FOR YOU!!

Plus as usual, we will also have online orders take place after WonFes for those who wish to order!

These orders will be made to order which means you will get the products a little later, but it ensures that anyone can be sure to get their hands on the figures!! You can find more information on the WonFes website above at a later date!

Also be sure to check out the official SNOW MIKU site for event information and more! ♪