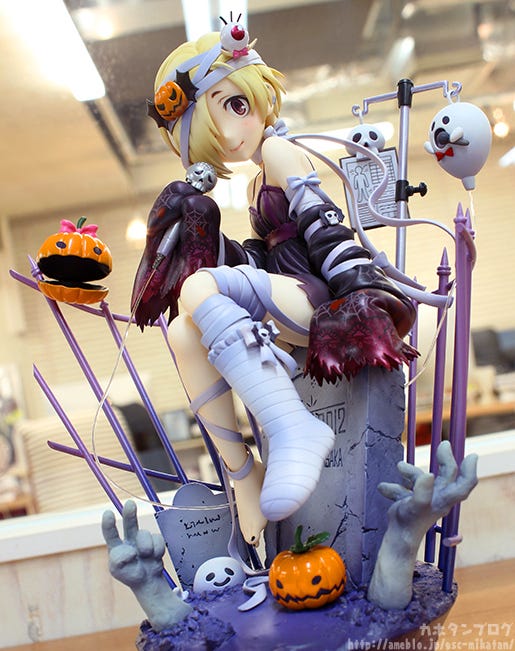 Hi everyone! Suwabe (@gsc_suwabe) from the Corporate Planning Division here! The world may be heading into Christmas mode now, but that is exactly why I’m going to take a step back and instead take a look at this Halloween themed figure instead!! “Today… we sing a chorus of fear together!”

From the idol production game ‘THE IDOLM@STER CINDERELLA GIRLS’ comes a 1/7th scale figure of Koume Shirasaka. The figure is based on the ‘Halloween Nightmare’ version of Koume and faithfully captures her pose and outfit from the original illustration. The details on her outfit such as the spider-web patterns on her sleeves, the various bandages wrapped around her arms and legs as well as the skull-shaped microphone she holds in hand have all been faithfully recreated in figure form!

The figure also comes complete with a diorama base that brings out the graveyard atmosphere of the original illustration with cute little ghosts floating around Koume-chan and zombie hands reaching from the ground!! Be sure to have a great Halloween night with Koume-chan as she smiles atop a gravestone in your figure collection!

▼ The gradient coloring of the fence is magnificent! Looking at the figure from the back the coloring of the base really stands out! The lovely hips of Koume-chan as she sits on the gravestone is calling for a closeup but we’ll get to that later!

▼ The areas that couldn’t be seen on the card have been carefully thought out and added to the figure! The cold, stone appearance of the gravestone has been faithfully presented and the carved letters and damage on the design has also been included on the figure!

▼ The ground features a jack-o-lantern and zombie hands! ▼ We also have a charming little ghost with his hand sticking out! ♥ No matter where you look the details surrounding Koume-chan are amazing! ♥

▼ We also have a ghost attached to a drip and a skeleton biting down on a medical chart! So cute! The little details that bring out the ‘hospital’ theme together with the mixed in Halloween theme make for such a unique and playful figure!

▼Speaking of the medical drip, the microphone Koume-chan is using is connected with a cord that looks like one of the see-through tubes used for a drip! As you can see the base itself is a work of art, but now it’s time to look at the main feature herself! (`・ω・´)

▼ Just look at this fantastic outfit! The little skull faces all over the design match up with the base nicely, and even though she is covered in bandages there is still something so charming and cute about her!

▼ The intricate details on those sleeves! The spiderweb and bloodstain patterns on the sleeves together with the gradient coloring make for a stunning sight!

▼Looking from the front makes her look like her normal cute self from the illustration! ▼ But from the side you can see her right eye too! Not to mention she was winking the whole time!! ▼ The lovely pale skin revealed by her low-cut dress is a treat! ▼ Not to mention the curves of her bottom and hips as she sits on the gravestone! Not to be missed! In fact, there is nothing that should be missed on this Koume-chan figure! Everyone should add her to their collections!! ♡ Orders from the GOODSMILE ONLINE SHOP will be open until the 15th December at 12:00JST!

（´-`）.｡oO（ That mysterious charm that characters like Koume-chan have always catches my attention…)