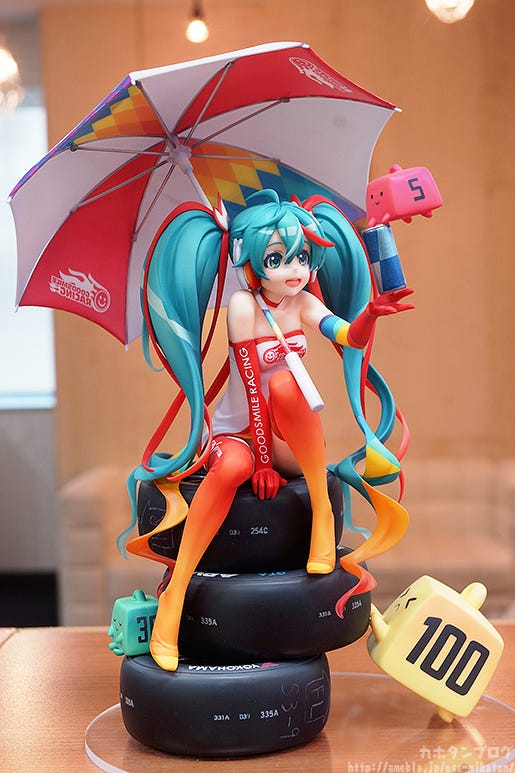 The official character of the Hatsune Miku GT Project ‘Racing Miku’ has been transformed into a 1/8th scale figure based on her 2016 design! The illustration by popular animator Mai Yoneyama has been faithfully captured in figure form for fans to enjoy in their collection!

Racing Miku is posed taking a break at the race track with her parasol opened out as she sits on a pile of tires with an adorable smile! She is posed together with the colorful ‘Weight-chan’ characters that were created based on the handicap weights added to GT cars!

The official character of the 2016 Hatsune Miku GT Project!

The long awaited figure of the 2016 version of Racing Miku is finally ready to go up for preorder, with orders opening up tomorrow! ★

The original design was based on the ideas of ‘Victory’ and the ‘Phoenix’ which created a lovely colorful outfit that also has a bit of a fiery theme to the colors! The cute, innocent smile of this year’s Racing Miku also always stands out in her illustrations! ♡

The figure is based on this illustration by Mai Yoneyama! A relaxed, everyday kind-of scene with Racing Miku-san sitting on a pile of tires together with the cute and colorful ‘Weight-chan’ characters! (｡･ω･)ﾉﾞ

The Weight-chans are characters based on the handicap weights put on the leading cars in the SUPER GT! They were designed by Shigeto Koyama and each of their expressions have been captured so perfectly on the figure! While the front view of Miku gives her an innocent, playful appearance with her adorable smile… The back has a more mature appearance with rather sexy curves! ▲ That curve from her back down to her bottom… so perfect!

The figure allows fans to enjoy both her adorable smile as well as her beautiful body – all tied together beautifully with a lovely outfit and base!ヽ(●´Д｀●)ﾉ

She is posed balancing her parasol on her shoulder with such a youthful and playful look! The area around her inner thigh’s that show off a bit of skin  make her look so… defenceless!! ▲ They’re not panties so there is no reason to be embarrassed!

I decided to get some comments from the head planner Hamako regarding the highlights of the figure, and will be taking an even closer look at the figure on tomorrow’s blog together with her comments so be sure to check back tomorrow as well! ε=(｡・д・｡)

By the way, the final race for the season is coming up this weekend!☆

▲ Miku herself is amazing, but the detail on the parasol and base is also fantastic! ♪

The fact that her eyes are posed looking at Weight-chan and not at you makes it seem like you are peeking into Racing Miku-san’s break time and she hasn’t even notice you are there yet! It’s strangely exciting! (/ω＼)

It’s a little diorama that captures the scene beautifully! Be sure to add this adorable Racing Miku to your collection!

Keep your eyes on the Good Smile Company Site for more details! ♪

Tomorrow’s blog will take a closer look at the finer details and highlights! ヽ(ﾟ∀ﾟヽ 三 ﾉﾟ∀ﾟ)ﾉ

As of today, Kahotan blog is also available in a Taiwan edition! (∩・∀・)∩ The blog is available in various different languages, so be sure to follow your preferred language!!