Mumei (Kabaneri of the Iron Fortress) 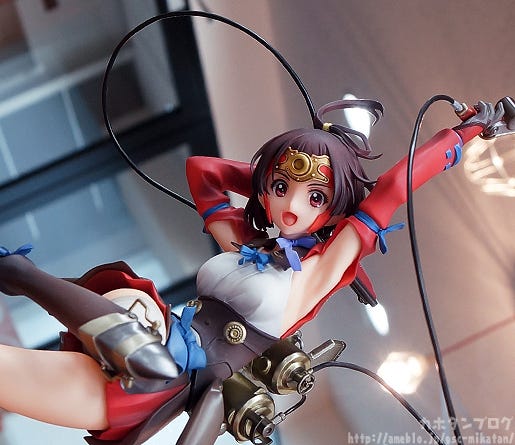 From the anime series ‘Kabaneri of the Iron Fortress’ comes a 1/7th scale figure of the main heroine – Mumei! The figure is based on an original illustration that shows the combat prowess of the Kabaneri – Mumei is posed jumping around as if nimbly defeating a group of Kabane in a dynamic pose that looks like it could just to life at any second!

Her dexterous build is contrasted by the mechanical, heavy looking machinery on her back as well as the guns she holds in her hands which have all been sculpted and painted with the utmost attention to detail for fans to enjoy in their collection!

The young Kabaneri girl – a hybrid of human and Kabane!

A 1/7th scale figure of the mysterious girl who boards the Koutetsujou! The innocent smile on her face, those lovely curves for someone her age, the steam guns in her hands the the enegetic jumping pose have all been captured beautifully based on the original illustration! ★

Before you start worrying about leaning… don’t! The figure is perfectly stable! It has been specially designed to not use any visible transparent props or anything, and instead holds in place securely with just the pin on the special base! This allows the figure to look just like the original illustration and so full with life while also bringing out the atmosphere of the series!

Another thing that really stands out is the different textures! Just compare the open areas that show off her soft, bare skin with the sharp, mechanical appearance of the machinery on her back! The difference in texture is created through both the sculpt and the paintwork and it creates such an amazing contrast! Not to mention how much it brings the figure to life! ε=(｡・д・｡) The harness around her hips together with the holsters for her steam guns have a glossy appearance for yet another nice contrast in texture!

The ribbons on her outfit are all gently fluttering in the breeze, while in comparison the cords that connect her steam guns create a beautiful arc in the air without being influenced by the wind – perhaps showing the weight of the cords, or simply the strength of Mumei’s movements!

Taking a closer look at each of the parts on figures can tell you so much… and it can be so much fun! ★ （´-`）.｡oO（The textures look so different that you can’t help but run your fingers along them to try and feel the difference too!）

Speaking of fingers!! Take a closer look at her fingers and see the details of the joints and the thickness of the gloves she is wearing!! ☆ ▲ The seam on the tip of the fingers and the creases at the base of the thumb!

The way she is holding the steam gun isn’t just a hand holding on with all her might – each of the fingers has clearly been carefully positioned to create such a well thought-out pose. Even the right hand which was never even visible in the source illustration has been beautifully sculpted to join the left!

The bayonets can be deployed from the steam guns!!

But that’s not all…!

The center can also be bent allowing to pose the guns as if being loaded! Scale figures are best known for their detailed sculpt and paintwork, but this is one of those figures that has both that as well as a few little tricks to make it fun to play with as well!! (/ω＼)

Next let’s take a look at her expression! A lovely innocent smile as Mumei looks down from the air! ♡

A perfect expression for a character like Mumei! Inncocent and ignorant of the ways of the world but with a strong will to fight in order to survive!! As I pointed out with Nendoroid Mumei, note how the bob cut hairstyle has been faithfully sculpted with the inside trimmed up higher! ♡ You can clearly see the difference between the outer hair that is moving with her pose and the inner hair which more closely follows the round shape of her head! At first glance her hair looks like a rather simple bob cut, but if you look closer you can see there are three layers separately sculpted each with lovely detail!! ☆

In addition to the figure itself, purchases will also include a Postcard of the Original Illustration! This will be included with all purchases from any stores! * The above is just an example image. The design is not final and may change.

A cute Kabaneri with a petite build and lovely smile, fighting in the air with a dynamic pose! Be sure to add her to your collection!