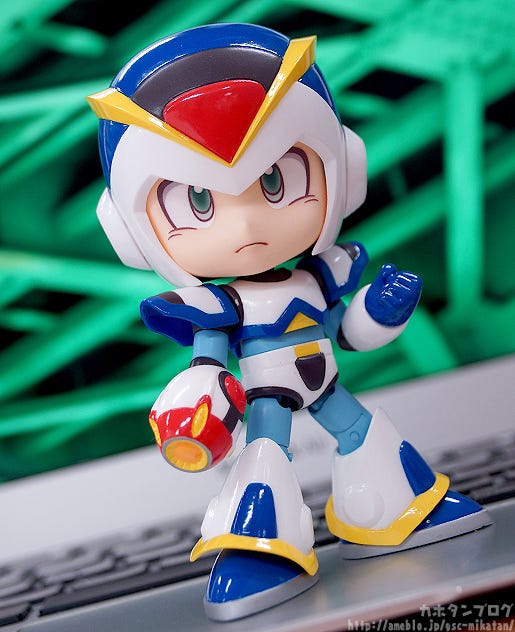 I noticed that the students have all switched from Summer to Winter uniforms. It’s really starting to feel more like Winter is coming now! The school culture festivals will also be starting soon! Just thinking about it brings back so many memories!

Anyway, today I’m going to be taking a look at a figure that will be up for preorder from next week! From ‘Mega Man X’ comes a Nendoroid of the Maverick Hunter X with all of his upgrades complete! Optional parts include his X-Buster with the standard shot, charged shot as well as his upgraded ‘Spiral Crush Buster’ shot! He even comes with parts to recreate the secret ‘Hadouken’ pose from the game!

The Nendoroid comes with both a standard expression as well as a combat expression to switch between. His legs are also specially articulated allowing you to pose him in the dashing pose and jumping pose from the game!

The Maverick Hunter who fights for peace!

The Maverick Hunter X who fights alongside his partner to maintain peace in the world and protect humans and Reploids alike from Maverick Reploids is joining the Nendoroids! ☆

The sharp, mechanical appearance of his armor together with the round human-like appearance of X himself have been faithfully preserved and the X-Buster hand is ready to take down any Mavericks that pose a threat to peace! The rather serious yet passionate look on his face has also been faithfully included! Lovely details that bring X to life in Nendoroid size! ▲ This perfect curves are not something you see very often on Nendoroids!

Those who think you’ve seen something similar in the past, X’s predecessor has also been in the Nendoroid series! ε=(｡・д・｡) To think that the first Mega Man Nendoroid was No.556… and yet the most recently announced Nendoroid Chris Redfield is already at No.681! Time is really flying by!!! You’ll have to wait until next week to see what number Nendoroid Mega Man X: Full Armor will be! ♪ Even the details of the soles of his feet have been faithfully sculpted and painted onto the design! Plus the shoulders, upper arms, wrists and knees are all fitted with joints allowing for action poses like this jumping pose right out of the game!

He also comes with bent arm parts which you can swap out to recreate various scenes and make original poses as well! The Nendoroid stand can easily hold up X in a forward-bent posture allowing you to somewhat recreate the dashing pose from the game as well!

Plus due to the fact this his feet are flat you can also pose him without a stand at all if you are careful about the balance! Take a look at the very first photo of the blog for an example! ヽ(●´Д｀●)ﾉ ▲ Looks great together with the included combat expression!

The coloring and shape of all the effect parts has been carefully adjusted to faithfully represent the attacks from in game! ε=(｡・д・｡)

By the way… the name of the fully charged shot from the upgraded arm armor is apparently the ‘Spiral Crush Buster‘! How many of you knew that before reading this blog?

Last but no least… you can also pose him using the secret move from the first game! ▲ Hand parts to pose him in this pose are specially included!

You can also use the Hadouken parts as a smaller version of the standard charged up shot if you pose it with the X-Buster instead!

Bring the Mega Man X universe into your collection!

He’ll be up for preorder from the 18th October JST!☆

Plus orders from the GOODSMILE ONLINE SHOP will also include a ‘1UP Acrylic Plate‘ as a bonus! Be sure to keep your eyes on the Good Smile Company website for more information!! ♪