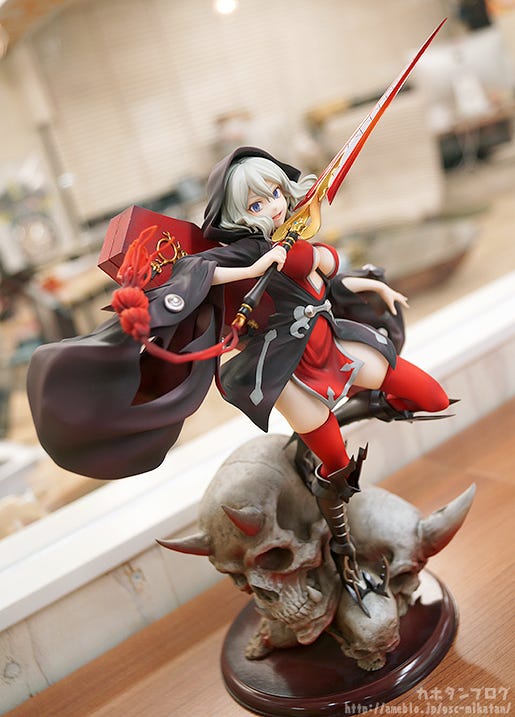 From the anime series ‘Chaos Dragon’ comes a 1/8th scale figure of the master assassin that will eliminate any target given – Lou Zhenhua! The figure is based on an original illustration by Shimadoriru, the original character designer for the series.

Lou Zhenhua has been placed in a captivating pose, with the finer details of her design all faithfully captured in figure form! The enchanted sword ‘Qisha Tianling’ that she refers to as her Lord is included for her to hold, and the figure’s base features a large skeletal head to bring out the atmosphere of the series in high quality for fans to enjoy by their side!

The armed monk affiliated with Kouran!

The assassin so skilled that it is said that nobody in the dark side of the world does not know her name – Lou Zhenhua is getting a lovely 1/8th scale figure! She is posed in a dynamic pose holding the enchanted sword ‘Qisha Tianling’ which she refers to as her Lord! ♡

Her lavish, bewitching smile with a hint of madness together, sexy outfit and the detail on her beloved sword all come together to create a figure that captures everything about Lou Zhenhua beautifully in figure form! The impressive curves of her hips and legs can be seen through the gaps, and the large hood she wears has such intricate creases and shadows to maintain a realistic appearance! ♪ The gentle sculpt of her sleeves blowing about in the wind and dynamic look of her figure all the way down to her finger tips is such a pleasure to look at! This angle also shows just the right amount of skin on the legs to be sexy but not too showy! (*´ェ`*) But that said, looking from a lower angle shows just how bold her choice of outfit is! It’s also a show to how confident she is in her skill as there is clearly not much need for armor! This photo really takes things as close as they can get! You’ll have to add her to your collection to see any more!! (/ω＼)

If you choose to turn your head upward though, you’ll find another rather pleasant view! So perfectly shaped… and almost gravity-defying!!

The strap that holds the coffin on to her back comes in-between the cleavage making them even more prominent! Plus if you look close… you can kind of make out the exact shape of the body underneath that outfit!!!

The base of the figure is just as impressive as the figure itself, with a pile of heavy-looking skulls piled up creating a surface for Lou Zhenhua to stand upon! The touch and cracked appearance of the skulls as been preserved on the figure so beautifully! (´□｀｡) You can see the skulls have been changed over the ages with slight changes in color tone and chips and cracks all over the design! The texture of the various different parts such as the teeth are also made to look different from a paintwork perspective to create such a realistic appearance!

Close up on her face! (｡･ω･)ﾉﾞ Those aggressive eyes and excited smile… the expression is both cute and strangely frightening at the same time! It’s wonderful!! ♥

But her expression isn’t the only one that caught my eye! The blank, vacant eyes of the skulls on the base are also amazing! If a little scary! (°Д°；≡°Д°；) The red of the sword matches up with the coffin on her back and her outfit with the golden guard making a lovely accent! ★ ▲ The paintwork really brings the figure to life!

A beautiful assassin with amazing proportions and a great expression to boot! Bring the Chaos Dragon universe into your collection with the 1/8th scale…