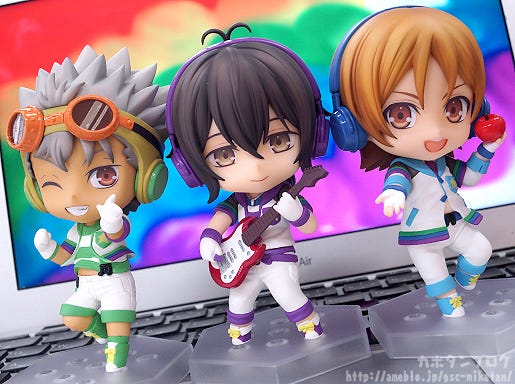 Today I’ going to be taking a look at the latest in the Nendoroid Co-de series, the members of…
Over The Rainbow! From the hit anime movie ‘KING OF PRISM by PrettyRhythm’ come Nendoroid Co-de of Kaduki Nishina, Koji Mihana and Hiro Hayami – all three members of Edel Rose’s top-class Prism Star Unit ‘Over The Rainbow’. The Prism Star outfits that shines during their performances on the Prism Show stage has been carefully converted into Nendoroid size.
*Each sold separately.

From the anime film that gained fans all over the world and has a sequel coming out in June 2017, KING OF PRISM by PrettyRhythm comes Nendoroid Co-de figures of the three OVER THE RAINBOW members! The different colored headphones and semi-matching outfits that each have a white mix with their image color have all been adorably converted into Nendoroid size! Even as a Nendoroid Co-de his smile is so bright and priceless!! His silky looking hair and the little details on his outfit such as the creases have been beautifully sculpted! I want to prepare a yellow rose specially for him! Such a refined smile from the prodigy who excels at writing songs that attract so many fans! His guitar is also included in such lovely detail along with a little guitar pick!! The tied up part on the back of his hair is a separate part that can be moved around for slightly different nuances too!

– The Idol of the Streets – That playful winking expression captures his personality so perfectly! The energetic pose that gives a little peek at his belly button is cute, but at the same time his masculine features have also been nicely preserved on the Nendoroid design! (；ω；) Those looking to get their hands on the Nendoroid More: Dress Up Wedding or Cheerleaders can find them at Machi Asobi Vol. 17 or at New York Comic Con 2016!

Be sure to add the OVER THE RAINBOW members to your collection!! ♡

Up for preorder from tomorrow!!