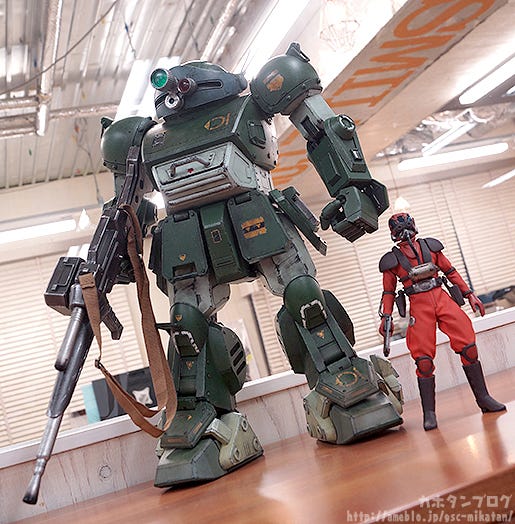 From the mecha anime series that first aired in 1983 that has led to various OVA series, novels and games ‘Armored Trooper VOTOMS’ comes a 1/12th scale action figure of one of the most well-known mecha from the series – the ATM-09-ST SCOPEDOG!

The figure stands approximately 33cm in height and captures the original design from the anime series down to the finest of details. The figure is fully articulated down to the joints in each finger and can also be transformed into crouching mode. The pelvis joints of the figure can be adjusted vertically in 3-steps to adjust the leg lengths allowing for various different poses. The magazines for the arm punch attack can be loaded into the arm, and spare magazines can also be mounted on the holders found on the hip area. The included GAT-22 Heavy Machine Gun has a detachable fabric belt, barrel and stock, which allows you to convert it into short barrel form. It also features detachable machine gun magazines which can also be mounted on the hip area of the armor.

A 1/12th scale action figure of the SCOPEDOG from Armored Trooper VOTOMS!

The unique battle-damaged paintwork that threezero is so well known for as well as the amazing sculptwork on the finer details and accessories, full articulation down to each joint in the finger… this really is the perfect SCOPEDOG figure!! The ATM-09-ST SCOPEDOG is a highly manoeuvrable humanoid AT (Armored Trooper) that features muscle cylinders that allow it to move in a similar way to humans. It is capable of combat in a wide variety of areas include space, open land and urban areas. The bottom of the feet are fitted with gliding wheels which can easily be rotated for quick and agile movement in almost any situation, and the feet also feature ‘turn picks’ which can be deployed into the ground for emergency braking. The trademark camera lens allows for standard zoom, wide area zoom and detailed sighting which can all be recreated on the figure by turning the lens! (´□｀｡)

The figure also comes with a 1/12th scale AT Pilot to display beside or inside the main figure!! The rubbery appearance of the pilots outfit has been beautifully preserved, and he is also articulated allowing for all sorts of different poses! ★ ▲ You can even pose him sitting down like so! ♪

The inside of the cockpit is also sculpted in amazing detail! ヽ(●´Д｀●)ﾉ ▲ Just enough space for one pilot!

As a side note, Nendoroid Petite Mikudayo can also ride inside the SCOPEDOG! ▲ She has a rather convincing size, doesn’t she?!

In addition, the SCOPEDOG can also be displayed in the pose just before the pilot gets into the AT! ♡ The part he is holding on to here also opens and closes and there are all sorts of similar moving parts that make the figure all the more fun to play around with! ♪ One last moving part I want to show off!

The Gliding Wheel that gives the SCOPEDOG its high maneuverability as well as the Turn Picks that it uses to stop its fast movement without a seconds notice both move around!! (∩・∀・)∩

You can also recreate the powerful close-combat arm punch with the figure!! You can find a variety of more photos over on the official product page, so be sure to take a look!!(｡･ω･)ﾉﾞ

Bring the world of Armored Trooper VOTOMS into your collection!