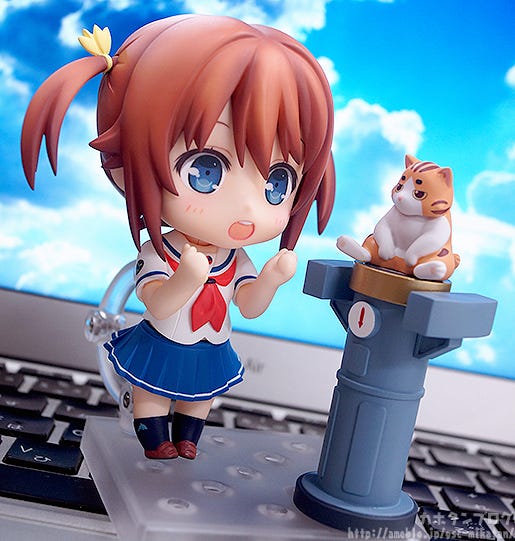 I’m really starting to get some Autumn vibes now! Anyway, today I’m going to be taking a look at… From the popular anime series ‘HIGH SCHOOL FLEET’ comes a Nendoroid of the captain of the Harukaze – Akeno Misaki! She is dressed up in her Yokosuka Girls’ Marine High School uniform and comes with three different face plates for all sorts of different scenes. She comes with her standard smiling expression, a shouting expression that suits the proud captain of the Harukaze as well as a surprised expression based on when she was under increasing pressure in the series!

Optional parts include the captain’s hat that proves she is captain of the ship as well as binoculars. A compass is also included allowing you to pose Akeno navigating on the bridge of the Harukaze! Last but not least, the Great Captain ‘Isoroku’ the cat is also included to display with her, and can be displayed sitting on the compass as well has being held by Akeno!

Living by the sea, protecting the sea, and journeying across the sea… the Blue Mermaids that protect the seas in their ship Harukaze! The captain of the ship is none other than this adorable Akeno Misaki who is now joining the Nendoroid world! ♥

She comes with all sorts of different parts even including parts that let you display her hugging the series mascot character – Isoroku!! Not to mention those eyes that are simply sparkling!! You can feel the youth!! The careful sculpting of her twin-tails as well as the Yokosuka Girls’ Marine High School uniform with a lovely blue pleated skirt and red scarf all come together to make sure an adorable, detailed Nendoroid! Also note the little bit of skin you can see from the opening in between the skirt! ☆

From this angle you can also see that the school emblem near her neck as well as the Harukaze symbol on her shoulder have been included on the Nendoroid design! On the other shoulder there is also something that you might find in some of the photos below! (´∀｀*)

Anyway, Akeno is well known to be quite an emotional captain and in order to get that across on the Nendoroid she comes with some lovely face plates! Let’s take a closer look at them!! (∩・∀・)∩ Much more serious, confident eyes and a shouting face! (/ω＼)

As you can see you can change the super cute version of Akeno into the cool side of Akeno as she gets ready for some operations on sea! I can just imagine her cute voice in my head now! “Because I’m the captain of the Harukaze”! ♡

She also comes with a compass to recreate the look of the Harukaze’s bridge! The top of the compass can also be removed to have Isoroku posed sitting on the top! (●‘∀‘●)ﾉ” Moving onto her third expression… This expression together with the included binoculars allow you to recreate a certain scene from the series that fans may remember!!

As you can see, she comes with quite a selection of optional parts! (´□｀｡) ▲ The hat even has her name tag printed on the inside!

The Harukaze model ship can be displayed together with her standard expression to great effect! You can line up all the parts to create a scene that really brings out the Haifuri atmosphere! ♡

Be sure to add the adorable little captain to your collection!
Nendoroid Akeno Misaki!

She’ll be up for preorder from the 8th September! ★

Be sure to keep your eyes on the Good Smile Company website for more information!

Plus! These two were also announced at Wonder Festival 2016! ∩(´∀｀)∩ Be sure to stay tuned for more info!!