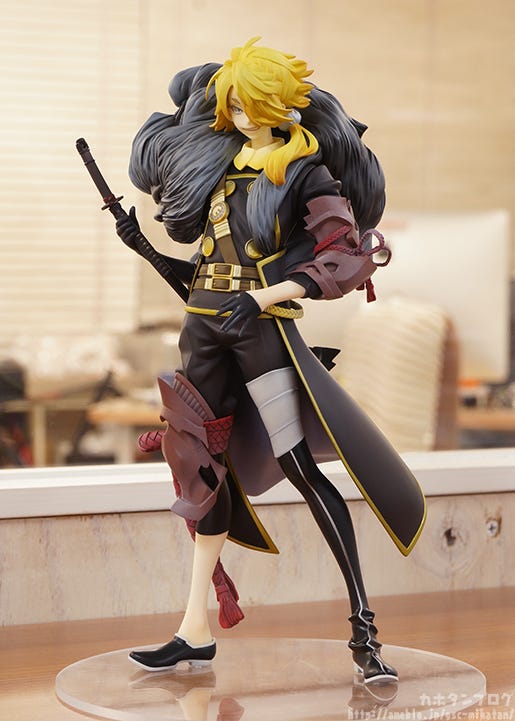 With big Summer event rush is almost coming to a close, and I’m already ready to start saving up for the next set of events! But anyway, today I’m going to be taking a look at… From the popular browser and smartphone game ‘Touken Ranbu -ONLINE-‘ comes a 1/8th scale figure of Shishiou based on his standard standing pose from the game.
His powerful yet slim legs, long wavering cape blowing in the wind, the even the nue creature on his back have been faithfully sculpted and painted to create a perfect rendition of Shishiou and all his charms in figure form. Be sure to add him to your collection!

“Just leave it to me, the great Shishiou!”

As with the previous scale figures from Touken Ranbu -ONLINE- the figure is posed in his standard illustration from the game! ▲ The ‘nue’ has such an incredible presence!

The nue is one of the most characteristic elements of Shishiou – the mysterious creature that rests on his shoulder with an undeniable presence! You can see from the back that the nue covers up around half of Shishiou’s body – it’s not a small creature! ( ･`ω･´) ▲Such a youthful, confident expression!

Shishiou’s young, innocent look has been preserved so nicely on the figure, with the gentle grin as well as a gleam of light that fills his eyes with confidence all faithfully included on the design! His rather unique hairstyle and the back tie-up of his hair really bring out his stylish side!! △ This angle just blocks off his eyes, but still shows the lovely grin that shows off his teeth giving him a bit of a mischievous look!

▼Next let’s take a look at his body! ▲Large buttons and an emblem!

Shishiou’s sword crest shines beautifully on his chest, and the four golden buttons on his outfit also really catch the eye! The buttons are not just painted with a flat gold, but in fact have a very slight light-dark gradient to make them look even more shiny!! He really is such a work of art! (;゜∀゜)=3 ▲ The red armor on his left arm!

It looks so awesome!! I would seriously try and wear this myself if it actually existed! The slightly more vibrant crimson rope tied around the middle is a similar color to the armor itself yet it still makes such a lovely accent. A more direct look at the nue’s face! Just seeing this would probably make me run away from the battle before it even began! ((((；゜Д゜))))

Just as you’d expect from a ‘black-laquered’ sword, it has a lovely shiny lacquered appearance and a high-class black color that suits Shishiou so beautifully! The curves from his thighs down to his toes have such lovely proportions, an the difference between the covered leg and the bare leg make for a lovely point of contrast! Note the ankle of the right foot and then move over to the left and enjoy the amazing sculpt of the creases in the material!! △ The armor on his right knee is similar in design to the left elbow armor. The various textures you can experience really make the figure such a pleasure to look at! ▲ His cloak blowing in the wind! ♪

The sculpt makes it really look like the wind is gently blowing the cloak up in the air, giving you a little peek at the material on the inside of the cloak! It’s a little hard to tell from this angle, but the yellow rope tied around his hips also makes use of a gradient paint job! The ever so slight gradients give the figure a little extra depth that really helps them to stand out!

▼Here I went out for a walk with Shishiou! ♪ △ Taking a break in the shade on a hot Summer’s day.

IS CURRENTLY UP FOR PREORDER!

Plus, orders from the GOODSMILE ONLINE SHOP will also include this item as a bonus! – Other Websites to Check –