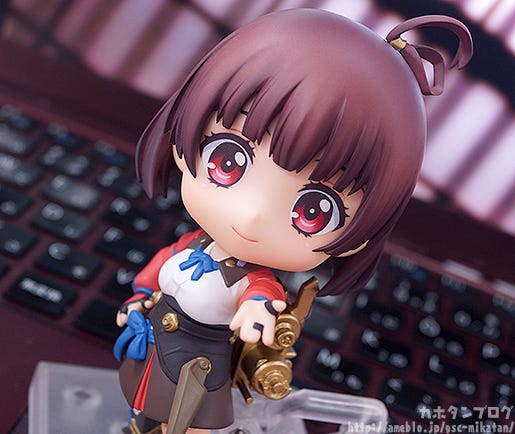 Today I’m going to be taking a look at…
Nendoroid Mumei! From the anime series ‘Kabaneri of the Iron Fortress’ comes a Nendoroid of Mumei wearing her combat uniform! She comes with three different face plates including a cute standard expression, a gallant combat expression as well as a more comical glaring expressionHer backpack engine is included and although small is filled with intricate details. Two of Mumei’s steam pistols are included as weapons and also come with effect parts as well as interchangeable parts to display them with bayonets deployed. Alternate hair parts without her head armor are also included allowing you to display a more everyday side of Mumei as well!

Kabaneri. Neither human nor Kabane, but something in-between.

The girl with a small build and bob cut hair that appeared on the Iron Fortress – Mumei is joining the Nendoroids! Her characteristic combat uniform has also been shrunk down to Nendoroid size down to the cloth wrapped around her legs and the blue ribbons tied in various different areas! ♪

If you look from the back you can see that her bob cut hairstyle has been faithfully sculpted with the inside trimmed up higher! Plus her steam pistols also include interchangeable parts to display them with the bayonet parts deployed, allowing for even more poses from the series! △ You can create a jumping feeling with the Nendoroid stand! ★

Mumei dancing through the air in combat!
Of course, she also comes with an expression more suited for that… A gallant Combat Expression!
Plus she also comes with effect parts to display her pistols firing! ♪ She might have a small build, but her ability in combat is not to be underestimated!

While Mumei certainly has her cute scenes as the heroine of the series, it’s great to also be able to pose her more gallant side as she battles against the Kabane! (*´﹃｀*) She also comes with alternate hair parts without the armor!

Perfect for displaying the more innocent and playful side of Mumei in your collection! ( ･ㅂ･)و ̑̑ ｸﾞｯ !

Moving on to her third expression! The slightly tsundere side of Mumei that sometimes came out in the series can be recreated with this expression!

Add the cute yet strong Kabeneri to your collection!
Nendoroid Mumei! There is also a Scale Figure on the way! As well as a figma from Max Factory! ♪ All the items above will be available from the GOODSMILE ONLINE SHOP until the 1st August 2016 at 21:00JST! They won’t be on sale at other stores so make sure you don’t miss out!