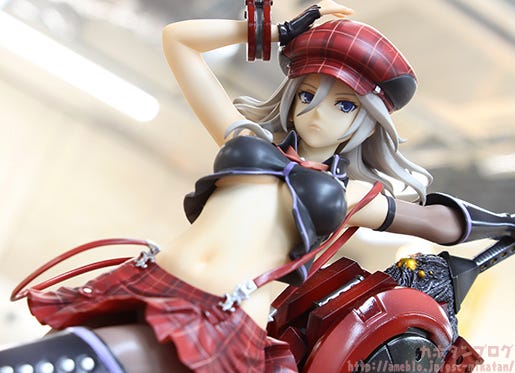 Hi everyone! Suwabe (@gsc_suwabe)  from the Corporate Planning Division here! Still getting over the excitement from the weekend of WonFes!

A big thanks to everyone who came by our booth at the event! I was positioned at the Sakura Kinomoto exhibition area and got the pleasure of watching all the fans enjoy the details of the figures!

During the ‘No Photos’ time after 16:00 I felt like I was in a museum with people lining up to see some kind of rare exhibit and then enjoying the reaction of fans as they looked on at the figures. It really made me feel proud to me a member of the Good Smile Company team! (*´ω`*)

Today I’m going to be taking a look at one of the figures that was displayed at WonFes and is now up for preorder!
Alisa Illinichina Amiella! From the anime series ‘GOD EATER’ comes a 1/8th scale figure of the Fenrir Russian Branch God Eater, Alisa Illinichina Amiella! She has been sculpted based on her pose from the anime series’ main key visual, carefully keeping her high-minded, composed appearance intact in figure form. The sculpting on her huge ‘God Arc’ has also been carefully detailed to give the figure a striking appearance that can’t be missed!

Let’s start off with a quick spin! ♪

The chequered parts of her outfit, creases in the fabric and the shiny appearance of her boots all look lovely, and the contrast between Alisa herself and the impressive God Arc by her side is also such a pleasure to look at! Let’s take a closer look from the top down!

Starting from the top! The cute flat cap with its chequered design is nicely visible from this angle, and you can also see the detail of the emblem on her chest!

I’ve recently been learning more and more about the manufacturing process of figures which often makes me ponder about how they are going to mass produce some of these more intricate details!! But I’m also very confident they will find a way, so don’t worry about it!!

Down to her face and expression! While she looks lovely from the front, a low angle shot like this seems to suit Alisa so well! That somewhat upset expression and the downward gaze also might tickle the fancy of some as well!

Down to her skirt! Yep! Just look at the lovely pattern on the skirt!! This photo was taken completely to show the details on the skirt and not show a nice close up of the beautiful curves of Alisa’s body! Don’t get me wrong!!

▼A shot from the side shows the details on the God Arc! The God Arc has a mostly mechanical appearance but has certain aspects that make it look like a living thing at the same time! As I said above the beautiful skin of Alisa’s profile and the heavy looking, boorish weapon make for such a lovely contrast! I wish I could explain this beauty with better words for everyone!!

▼A Closer Look at the God Arc! The rather disconcerting vein-like cables that come out from the grip of the God Arc make for such a unique appearance! The God Arc also seems to be lifting up Alisa’s skirt a little which makes me rather jealous!

Her Feet and Debris Base! This is definitely one of my highlights on the figure! The damage of the base really sets the scene and adds to the atmosphere of the figure! Ciel Alencon also from God Eater was released back in February 2015! The two of them together with their God Arcs really look amazing displayed together!!

(Ciel Alencon is also a rather nostalgic figure to me as when I first joined GSC I wrote the introduction text for the figure that was placed on our official website!) Whether or not you have Ciel Alencon, she still looks amazing though! Up for preorder from today! (`・ω・´)
Preorders from the GOOD SMILE ONLINE SHOP will be open until the 24th August 2016 at 21:00JST!
Alisa Illinichina Amiella (GOODSMILE ONLINE SHOP) We are currently running a special ‘Nendoroid Expression Design’ contest! Take a look at the link for more information! (*´ω`*)