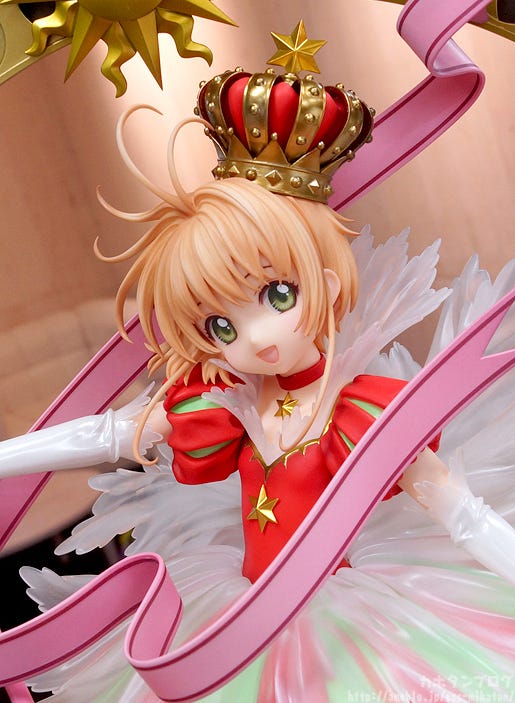 May the Blessing of the Stars be Upon You! Today I’m going to be taking a look at the 1/7th Scale…
Sakura Kinomoto: Stars Bless You! A collaboration project between Good Smile Company as a part of our 15th anniversary and ‘Cardcaptor Sakura’, which has not only reached its 20th anniversary but also started an all new ‘Clear Card Arc’ in the July edition of Nakayoshi magazine! The figure is based on an original illustration drawn by Cardcaptor Sakura’s author, CLAMP!

Sakura-chan’s sweet smile has been captured for fans to enjoy by their side, and the details of her hair as well as the frills on her skirt have been intricately sculpted to ensure everything about the original design has been kept intact. A special base has also been included to truly bring the illustration to life – it features various celestial bodies floating around Sakura as well as a circular frame based on the waxing and waning of the moon. Be sure to add Sakura to your collection with this intricate commemorative item!

Apologies for the long wait since her prototype was first revealed! The beautiful figure transformed from CLAMP’s original illustration has finally been completed as the ultimate Sakura-chan centerpiece for any collection! I remember back when I was in primary school and wished I could be like Sakura-chan… every time I felt the wind I would mumble “The Windy is nearby” to myself. I even tried roller-blading with my terrible reflexes and made pancakes my favorite food all because of Sakura-chan. I would never have imagined that I would be able to work with CLAMP-sensei and help transform an original illustration into such a lovely figure! I couldn’t be happier!!

The photo above is one of the official product photos taken by a professional, but all the photos below are my own photos taken in the GSC Offices! △ The figure stands approximately 45cm in height with the stand!

There are just so many intricate, beautiful details… I don’t know where to begin!

I have probably looked at the details on this figure more than anyone else in the world, but I still have no idea how to put the passion I feel for this figure into words! ( ∩ω∩)

You know that feeling when you try to explain a dream to someone by slowly explaining it piece by piece, but by the time you’re done it seems like an incomplete explanation? That’s exactly how I feel trying to explain the beauty of this figure to everyone!! The white, airy fabric above her skirt has been added onto the figure with a transparent material that stays faithful to the original illustration and also adds such a lovely extra level to the figure!

As far as the sculpting goes, you also need to take a nice close look at the sculpt of her hair around her cheerful face! (/ω＼) CLAMP-sensei’s delicate touch depicts Sakura’s silky hair so nicely, and it was quite the challenge to convert it into figure form! It had to have a certain amount of volume in figure form without becoming too done up to look different from the original illustration… but at the same time if it was made too thin then it would be impossible to mass produce…!

But the hair aside… just look at that adorable face!!

The green eyes with thin white lines at the bottom of the pupils… looking into her eyes just draws you right in! The gentle and warm Sakura-chan is staring right back at you with such a beautiful smile on her face! The details on the outfit and base have really been pushed up to a whole new level, but the moment I saw this face I was convinced that this was the Sakura-chan figure to stand above all others!

Just look how cute she is!!

I wish I could explain my love for her better than I am, but I know that fans will understand how I feel when they see this figure in person!

Let’s take a look at some other details! ★ Her knee-high socks have a glamorous finish and the little creases around the back of her knee are also fantastic! ♡ Each of her fingers have been carefully sculpted with careful calculations made based on the thickness of the material used for her gloves! You can easily make out the tips of her fingers through the gloves! Then we move onto the unbelievably intricate frills of her dress!

The tightly-packed appearance of the thin, soft material all gathered up has been sculpted in such detail, and they go all around the figure giving Sakura-chan such a light, airy appearance that really supports the floating pose of the figure! (´□｀。)

Looking back at the perfect fit of the gloves, socks and rest of the outfit I can also say that this outfit must have been carefully measured out and made with love by Tomoyo-chan! (‘-‘*)(,_,*)(‘-‘*)(,_,*)

Moving on to the celestial bodies included with the base! The planet parts themselves look just like models from a miniature solar system as they float around Sakura-chan, and have been painted with much deeper colors that contrast with the light and air appearance of Sakura-chan herself! The mechanical parts of the base’s design have also all been sculpted so nicely! ★

The planets actually look rather tasty! A bit like delicious candy!

The planets were an important part of the base on the original illustration, but were altered to look a bit more realistic to better suit with the atmosphere of the figure! Choosing between being more faithful to the original work or instead altering things slightly to make for a better figure is a very hard thing to balance, and I am always amazed at how well figure sculptor’s manage to balance out the details so nicely! (°Д°；≡°Д°；)

The back of the figure was of course never even in the original illustration, and was all sculpted and painted based on what could be seen! ♪ That’s not entirely true though! The design of the back of her outfit was provided to us with a separate illustration, but the way the outfit and hair are flowing and the creases on her sleeves and other little details all had to be carefully sculpted without any direct source material to work from!

You can really feel all the love that went into each little part of this figure!!

We also had so much fun taking photos of the figure that we made some special image cuts with special backgrounds this time around! (๑•̀ㅂ•́)و✧ I went to various stores and picked up various items that could be used in the photos and worked with the professional camera man and Chan Shuu to create some interesting backgrounds for the figure! It was actually a very fun and exciting experience! ♪

The final photos will be used on various adverts and other promotional material, so keep an eye out for them! (●´ω｀●)

This was another one of the background with a rather different taste! This photo is taken around various items you might find around the house, in the hopes that Sakura-chan will find a place in everyone’s home!

The figure has already been on display at Anime Expo 2016 and CCG Shanghai 2016, but was unfortunately closed to photos at the time! From tomorrow she will be on display at the animate ACZ Store in Akihabara! Be sure to come by and take a look if you’re in the area! Plus she will also of course be on display at Wonder Festival this weekend – together with the original illustration that she is based on! ♡

Top-class sculpting for the perfect commemorative item!
Add the adorable Sakura-chan to your collection!

The figure will be available for ¥25,000, which is honestly a very challenging price for us here at GSC! We went through so many meetings trying to set the price at a point that would allow as many fans of the series as possible to add the commemorative figure to their collection – this price is really pushing the limits!

I just wanted to try and get this figure to as many Sakura-chan fans as possible!! Just look at how adorable she is!!!

The figure will take quite a while to be released once the orders are in, but we will be putting everything we have to ensure she comes out in top quality for fans to enjoy in their collection for many years to come!

But I also have some new info!

For those who really want Sakura but just don’t have the space for the budget, we are also going to be releasing an alternate version without the base!

This version might not include the planets and large waxing and waning moon base, but on the other hand you can get an even closer look at the details on her outfit and that amazing expression! It will be available for ¥14,000! Be sure to keep both versions in mind when preordering!

More information will be available on the Good Smile Company Official Website tomorrow, and we will also be opening a special page with even more information, so be sure to check both tomorrow around noon Japan time! (੭ु ›ω‹ )੭ु⁾⁾♡