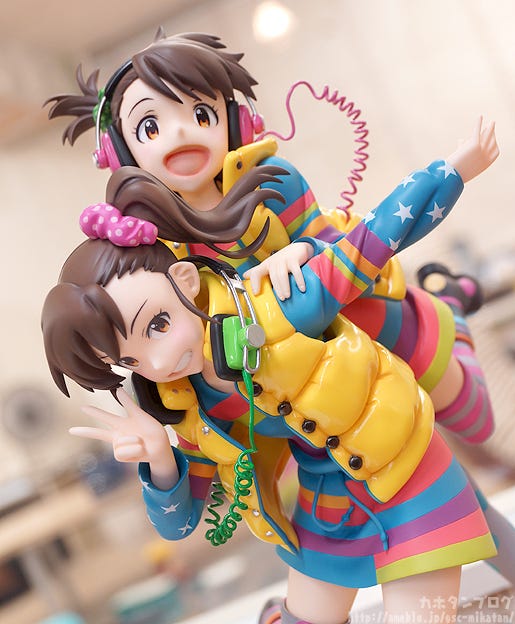 I’ve seen two twins talk in perfect unison in the past. It was so impressive… I’d really love to hear that again some time!! Anyway, today I’m going to be taking a look at this upcoming item from Phat!
Ami Futami & Mami Futami
! The mischievous, playful twin idols in an energetic pose!

The innocent appearance and positive vibes of the twins has been captured so nicely, allowing you to enjoy the charms of both  Ami Futami & Mami Futami as a single figure!

The colourful one-piece outfits with the sporty yellow vests as well as the alternate colored scrunchies in their hair, headphones and kind-of matching socks… the super colorful design matches with their huge smiles so nicely!! The socks as well as the stars and dots on their shoes are all painted by hand!! (･ω･ﾉ)ﾉ！

These kind of patterns are often done with decals, but that can sometimes leave behind a bit of a rough appearance. The painter behind the figure – Maimocchi (Turunoyakata) – wanted to ensure that the vivid coloring and colorful impression was preserved in detail for fans to enjoy!

Ami’s hair has been sculpted to capture the movement of her jumping up onto Mami’s back, while Mami’s bent over back with her ponytail fluttering around is also so intricately sculpted… Everything comes together to create such a realistic dynamic effect! They look ready to jump to life!

The original illustration was always amazing, but now you can enjoy that adorable pose from any angle that you please!

Anyway, this is in fact the 9th figure in the IDOLM@STER BD/DVD Jacket Illustration series! …the members have really started to come together now! Just a few to go after the twins! ♪ Ever since the Blu-ray/DVD jacket series started, the series has kept the details of both the characters as well as the most intricate parts of their outfits and accessories in tact. ♡

The yellow down vests make use of a glossy paintwork giving them a nice texture, and you can even see the difference in material through the sculpt where Ami’s hand is grabbing on to Mami’s shoulder! △ The metallic look of the headphones and the curly wire also look great! ♪

Plus this figure also includes a special optional part! An alternate expression for Ami with her eyes open!

The original jacket cover illustration had Ami with her eyes closed which does showcase her carefree personality nicely, but for those fans who would rather see the energetic Ami with her eyes wide open, this alternate expression is also included for you to choose between!! ♡

As for Mami’s expression… ♪ Such a mischievous yet adorable smile!! (/ω＼)

I recommend a slightly low to meet up with her eyes nicely! ♡ They will be up for preorder from Thursday! ★

Be sure to check the Good Smile Company or Phat! Company website on the day for more details! (・∀・) It’s Miku x Mount Mayon!
Miku enjoying a Perfect Date with the most Perfectly cone-shaped volcano of the world – Mount Fuji’s tropical sister Mount Mayon from the Philippines! This photo is taken from the Cagsawa Ruins in the Province of Albay, which was buried by Mayon’s deadly eruption in 1814.