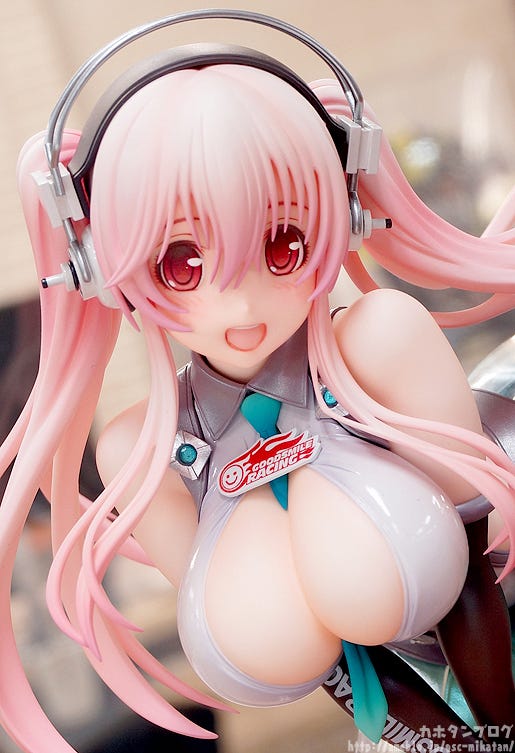 The vocalist and guitarist for ‘Daiichi Uchuu Sokudo’ Super Sonico-chan has been made into an eye-catching figure dressed up in the 2013 Racing Miku Supporters’ outfit!

The glossy appearance of the outfit has been faithfully reproduced on the figure as well as the semi-transparent parts that give the entire outfit a somewhat futuristic appearance. Even her stockings have been beautifully painted to show the stretching material, giving them such a realistic appearance! (●´ω｀●) Your eyes do tend to jump to that lovely round bottom, but also take note of the lovely detail on her pink twin-tailed hair as it flutters behind her! ♪ The sculpting is one thing, but coupled with the paintwork you can tell the difference between the textures so nicely… it makes you want to reach and and feel her delicious bosom for yourself! ★

Speaking of areas that you want to reach out and touch, this area really calls out to me as well… I can’t stop this vision in my mind of putting my finger in that bend at her waist! The skin looks so soft that it’s hard to believe the figure is made from PVC…! The forward bent pose also creates that little gap between her clothes and her skin!! (´□｀｡)

Another area that can’t be missed out on… The stockings are clearly quite thin, and the depressions made by Sonico’s graceful hand as it grips onto her leg makes me wish I could grab the leg myself and feel that softness!! It’s like the hand is sinking into her leg!! (*´Д｀)=з

You can really get a feel what areas of the figure the sculptor YOSHI-san and planner Kaneko Nitohei have focused on… which combined with the paintwork by Hiroyuki Hirose creates such a lively, touchable figure of Sonico… I could just stare at her all day long!!

But this figure isn’t ALL about the body, she also has this adorable baby face which shows off her personality as well!!♥︎ The little details around her eyes really bring out such a beautiful face!! This is the sweet Sonico that we have all come to love!! The contrast between the cute face and those overwhelming boobies is just another aspect of Sonico’s charm!

By the way!! The thing she is wearing underneath the miniskirt is a part of her outfit! Not panties!! (｀・ω・´)ゞ △ They’re not panties so no need to be embarrassed!
Be sure to add the charming Sonico-chan to your collection! The Nendoroid is only available to personal sponsors! Make sure you don’t miss out! This photo was taken at a lake in Kumamoto prefecture, Aso city last year in May.

I am currently living in Kumamoto, currently toward the north of the prefecture, but I often bring my friends to Aso city when they come to visit. There is an area in Aso called Sensuikyo that gives such a beautiful look at Mt. Aso – it is a well known location for tourists to see. Due to the earthquake that took place on the 23rd May 2016, the roads and paths that connect to Sensuikyo have been badly damaged and there is no way to reach the beautiful place. As one of the biggest attractions to the area, it has caused quite the blow to tourism in Aso.

When I took this photo I could never have imagined the disaster that would strike here. I can hardly remember why I took Kitakami-san and Ooi-san out with me here… I think I wanted to climb some mountains with the Kancolle girls. To be honest, the disaster did not affect me too much personally, but I want to pass on my condolences to all those that have suffered any losses in the disaster. I look forward to the day the I can come back to Sensuikyo and enjoy this scenery once again.