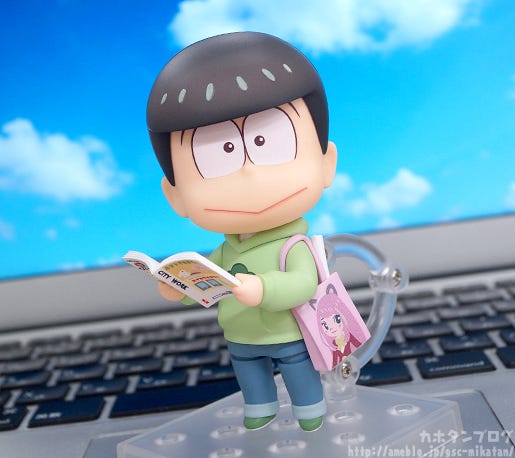 The weather keeps jumping between hot and cold at the moment! I get the feeling I’m catching a cold from all the sudden changes in temperature! Anyway, today I’m going to be taking a look at… The only one of the six brothers with a bit of common sense who becomes rather useless in the presence of cute girls – Choromatsu Matsuno is joining the Nendoroid series! ★

His downward facing eyebrows, V-shaped smiling face and the green hoodie have all been shrunk down into Nendoroid size keeping all of Choromatsu’s unique charms! (๑•̀ㅂ•́)و✧

Choromatsu is also known to keep his hair very well kempt, which is perserved on the Nendoroid with hyst how amazingly smooth it looks! △ The one little dent at the side is lovely though!

He also comes with lots of optional parts! First up, he comes with a paper bag featuring an illustration of his favorite idol – Nyaa Hashimoto! He also comes with the CITY WORK job advertisement magazine!

We got the original data for the magazine’s design directly from the publisher which means we could create the cover down to the finest little details!! △ Covering up his mouth makes his eyes look a little worried! ♪

“These sticks? Yep, they glow!“ This means he can go out and cheer for Nya-chan with all his strength!! ♪ Plus from this angle you can actually see the shirt he is wearing peeking out at the top of the hoodie!

Unfortunately, the glow sticks for the Nendoroid don’t actually glow, but I thought it would be fun to display him with some actual glowing glow sticks as well!! ★ △ Now it looks more like he really is participating in a concert! ₍₍ (ง ˙ω˙)ว ⁾⁾

The Nya-chan bag has a poster sticking out the back, and if you pose him with both the bag and the glow sticks it looks like he is walking home after an enjoyable live convert! (*´Д｀)=з △ The fact that he is still holding the glow sticks
shows how much he enjoyed the show!

Anyway, let’s move on to his second expression…

…which has a very sudden change!! Choromatsu has a very large range of expressions depending on how he is being treated, and the gap between his standard expression and this expression is quite entertaining!! ♡

This expression is best used with his brothers… You can just imagine some of his angry lines as he shouts at Osomatsu for taking his glow sticks before the concert! Bringing out the atmosphere of the Osomatsu-san series is really so fun and easy with the Nendoroids!!

But that’s not all! Just like his brother’s, Choromatsu also comes with a blank expression as well as three different expression stickers to choose from! ♪ Pose him swinging the glow sticks with this expression, or standing with one of his brothers with that expression… the possibilities are endless!

Be sure to create all sorts of fun and interesting original scenes!! ♡

The cute Nendoroid of the third Matsuno brother! ♪

He will be up for preorder from Thursday! ♪

Just like his brothers before him, preorders from the GOODSMILE ONLINE SHOP will include a special round base as well as two additional blank expressions! In addition, we are going to be having a special live broadcast to take a look at him and Ichimatsu tomorrow evening! Be sure to tune in!! Hope to see you there!!

Ichimatsu will be up on the blog tomorrow! ♪ Ryujo-chan getting rid of some of her stress by having the cats pour her some sake. Amatsukaze came by and was unable to hide her surprise… (；･`ω･´)