These two were both high on the rerelease request polls…

And both are now scheduled for rerelease!!

The rerelease polls were created as a part of GSC’s 10th anniversary… it’s hard to think that in May we’ve already reached the end of our 11th year! But even so, the rerelease poll results are still being used to help us decide what needs to be rereleased, and I’m sure that will still continue for some time to come!

This image comes from Hamako’s desk (one of 2012’s newcomers), look at all the sticky notes! One is a very simple “The mail size limit is 1MB”, but I can’t help but wonder why one of them reads ‘Servant’! :P

These products have a very special place in my heart! (`･ω･´)

The prototypes were originally shown back in December 2008. with both of them releasing in June 2009… it’s been more than three years since then! I remember when I first saw the colored prototypes I had already fallen in love with how cute they were… I wanted to take pictures that would really show off how great they were but I was never quite happy with the results…

But this time I’m going to ensure I get the photos that I want!!

Both Rin & Len are absolutely amazing! Even after three years they look incredible! Their individual sculpting alone is great, but the way that Otanaka from the planning team through to create the duo pose between the two of them looks even more fantastic!

There is a little extra trick to the double pose which I’ll show a little later.

She is in a lovely pose with one hand on her hip as she turns her body to the side!! It’s gorgeous!! The pose and expression capture Rin’s playful personality, and the little gaps of bare skin also provide a slightly sexier side to her as well!

Her cute, round hipline!

This is really where Rin-chan shines!! It wouldn’t be easy to see this hipline through a skirt, but with hot-pants you really get a good look!! It’s not only a lovely size, it also has such a nice round shape… it’s perfect!!

The way her body is twisted around not only shows off her bottom, but also allows for the little glimpses of skin between her clothes as she turns!

Just look how smooth and soft her stomach looks!!

Next up we have Len-kun!

While Rin is lovely cute pose, Len instead has a flashy, cool looking pose!
He has a lovely youthful looking body, emphasized by the great sculpt work!

Even the back has a dynamic feel to it!

His outfit and suspenders are both sculpted in mid-motion to capture the movements he is making during his performance!

I’m sure there are many girls out there who can’t get enough of this pose – he is bending down over his instrument, appealing to all his fans! （´∀｀）

Such intricate detail on the keyboard!

Even as a 1/8th scale figure, the indented areas around the black keys are carefully sculpted on! I also personally love the way his knee looks as well as thighs you can make out through his loose pants!

A special way to display them!

Most figures have both their feet connect onto a single base, but Rin and Len both only connect using a single foot. This means you can spin the figure around with that one foot as an axis, which easily allows you to create a pose between the two of them like this – you could even have them facing each other, or back-to-back instead! There are a load of different positions to try!

You know, I’d love to do a post on all the old figures that made use of 3D sculpting some time… 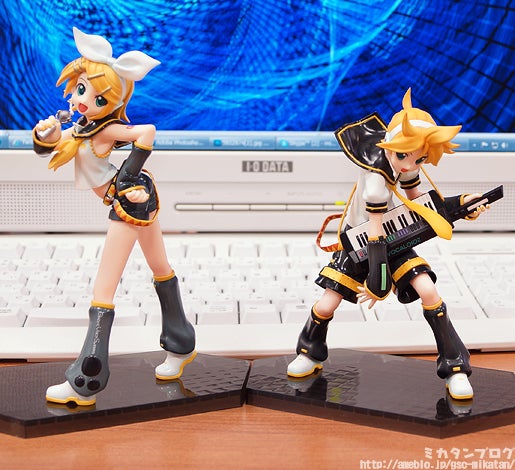 They’ll be up for preorder again from tomorrow! (`･ω･´)
Get in contact with our partner shops if you have any preorder or sales queries!