The previously unknown products have been revealed!

Two more products have been added to the website!

The WWR Harold is joining the Japan Defense Force Series from threeA – a lovely model with caterpillar treads! It’s also a huge 30cm in size which is certainly quite impressive… but more than the size, I just want those caterpillar treads! 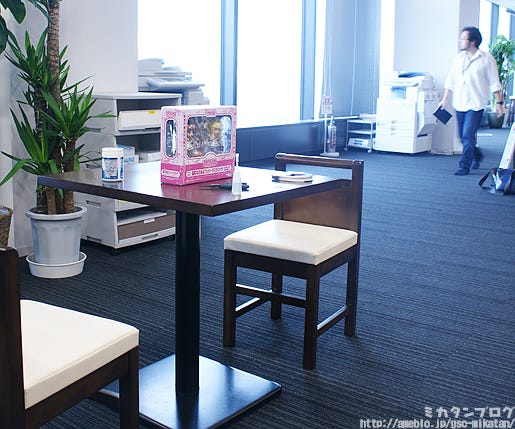 Today is also the premiere of…

We decided to announce this WonFes product to coincide with the release of the movie!

There is even a sample for us to peek at!

There are only 15 days left till WonFes now, so I suppose its not really that amazing that there are samples already! But anyway, let’s get on with the review! 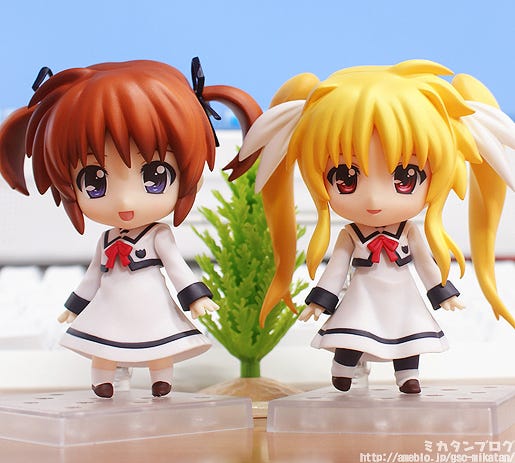 Nendoroids of Nanoha and Fate from the most recent Nanoha movie, both wearing their school uniforms! They also both come with a variety of optional parts! 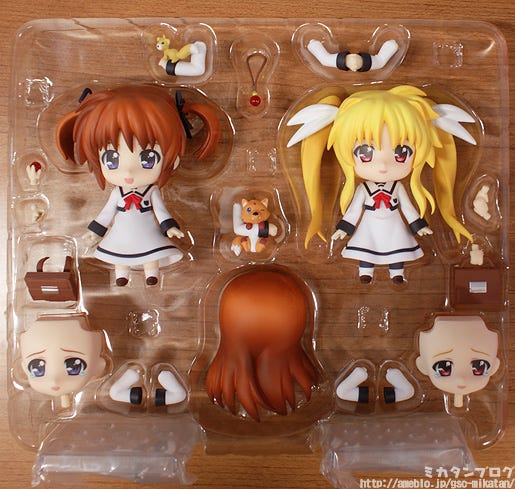 This is obviously a set of two Nendoroids, and each comes with some extras parts which we’ll take a look at shortly. They also each come with an extra expression – lots of goodies for fans to enjoy! 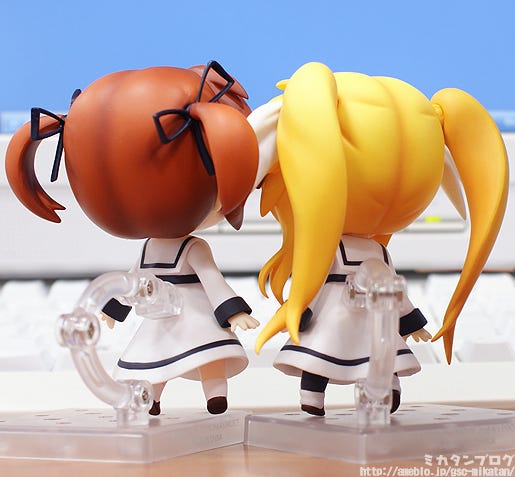 That simple white uniform with the blue stripes has such a neat and tidy look to it! The skirt is also nice and loose which ensures the legs can be moved around without any problems for all sorts of fun poses! 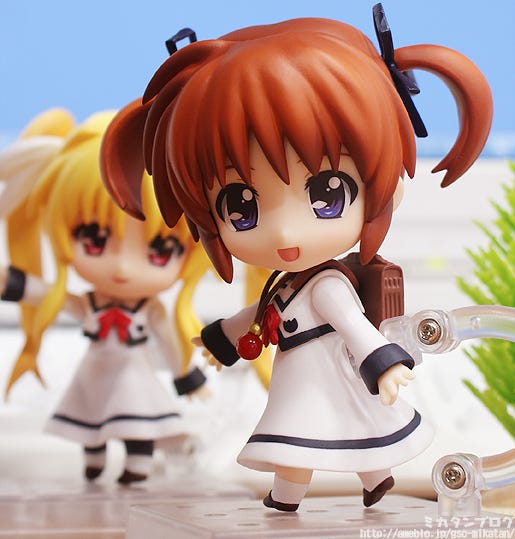 The younger version of Nanoha is so adorable!!

Nanoha comes with her device and a school bag!

The school bag is carried on her back, but it has a hole for the arm of the stand so that it doesn’t get in the way when you’re trying to pose her! 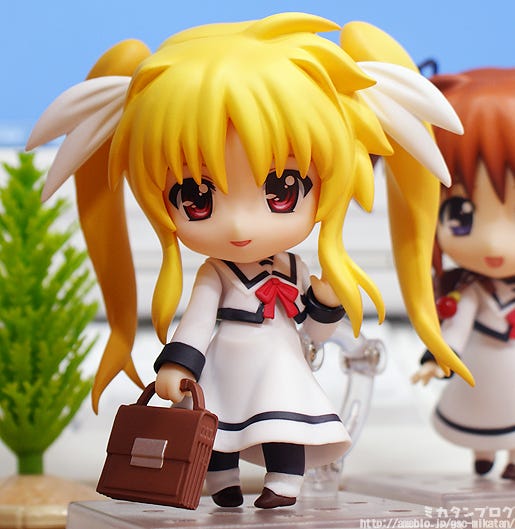 The young Fate is just as cute as Nanoha!! She looks so happy!

Fate comes with her school bag and a hand to hold it!

They both come with two bent arms for some cute posing options like this! 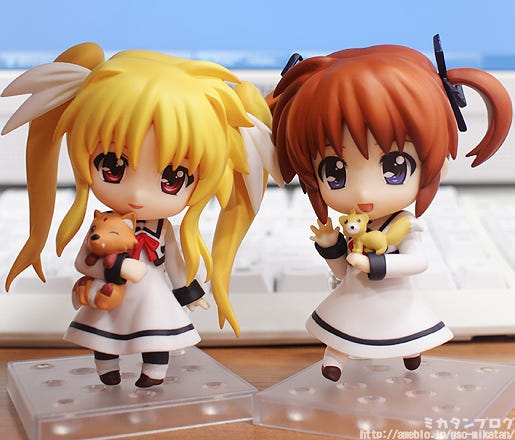 Arf and Yuuno in their animal forms!

They’re so tiny!! Both of them are attached to the arm parts that are holding them, so hopefully they won’t go missing too easily!

Even though Yuuno is so tiny, he still has highlights for the pupils in his eyes! Both of them are really important characters, so I’m glad to have them included! 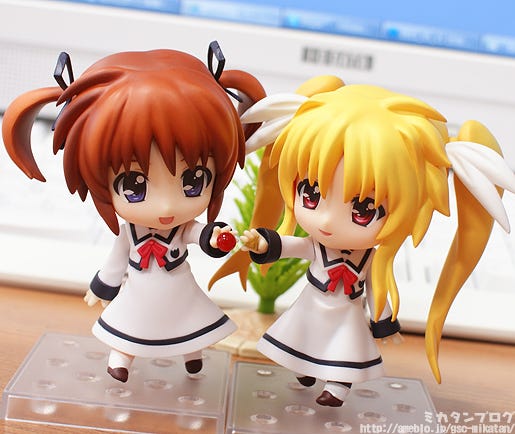 Holding out their intelligent devices!

When you pose the two of them together like this, it looks just like they are about to transform together! The devices are attached to the hand parts, but can be attached to any of the arms! 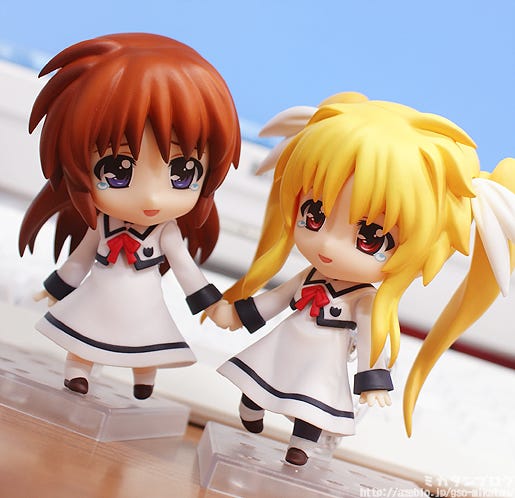 This lets you recreate one of the most popular scenes from the show! 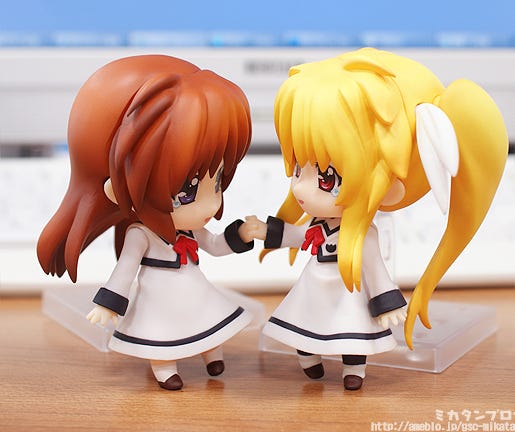 They suit each other so well!!

Not only can they hold hands, but there are also hand parts for them to couple hands together like this – you can even make out each and every one of their tiny fingers!! Absolutely incredible!!

There is no way a fan could say no with parts like this included!! Σ(ﾟДﾟ)ｶﾞｰﾝ 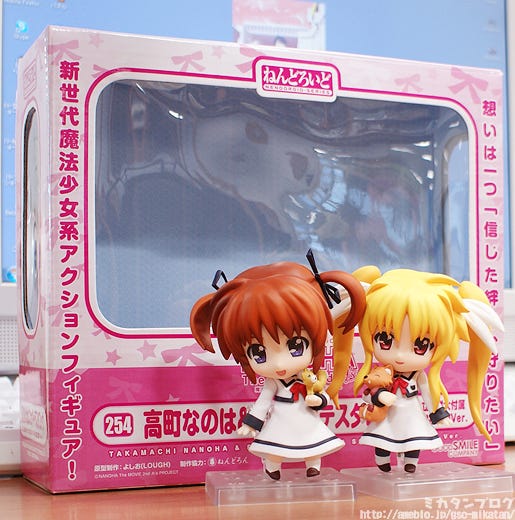 There are four ways you can get hold of them!

Here is a quick summary, click the links for more information!

I’ll also be doing a review of Insane-chan soon, so watch out for that if you’re interested in grabbing her!

But that’s all for today!
I hope to see you all again on Tuesday! (・∀・)ノ゛