A Quick Look at This Month’s Rereleases!

Today’s blog has quite a few photos, so I’m just going to jump right into it today!

Today we’ll take a quick look at all the products announced for rerelease this month!

We all know that once a figure has been our for awhile it becomes incredibly to get hold of it… I’ve know there have been times I’ve just been unable to get a figure I wanted leaving me down in the dumps. If you wanted but missed out on any of these figures in the past, then don’t miss out this time around! 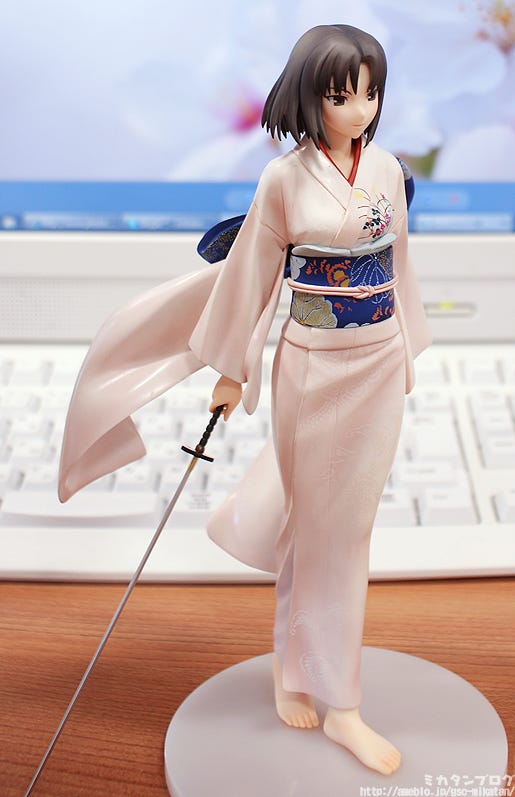 Shiki is of course from ‘Kara no Kyoukai’, one of the the many famous TYPE-MOON series! A movie of “Mirai Fukuin’ has also officially been announced now – when I head that I was so excited that I just couldn’t sit still! (I hope we’ll see a rerelease of Nendo Shiki as well!) 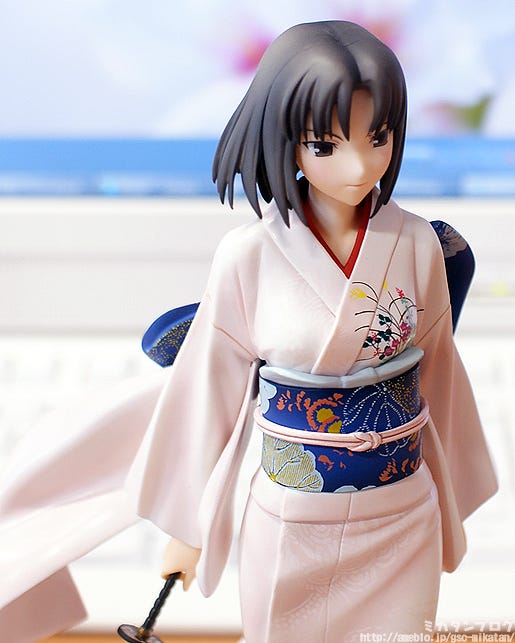 What a beautiful figure!!

I am a huge Kara no Kyoukai fan, but even if I wasn’t I would want this figure – she just looks so lovely! It’s quite hard to see from this photo, but the kimono is covered is a really intricate pattern that looks absolutely stunning! 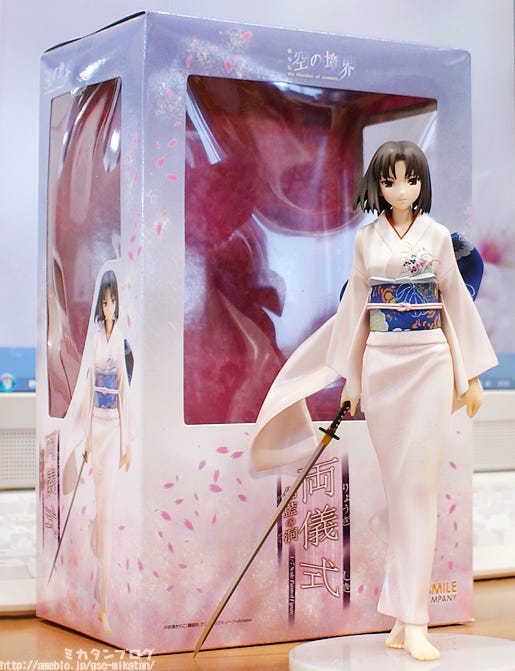 She will be rereleased in November 2012!

As you can see, the packaging was just as beautiful as the lovely Shiki! She is available for preorder at our partner shops now! 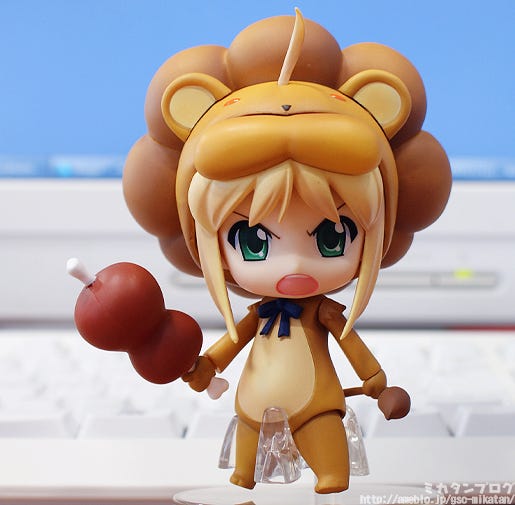 Another product that had one of the highest results on Good Smile’s 10th anniversary rerelease polls! Somehow her mane looks really tasty – it looks like some kind of doughnut! :P 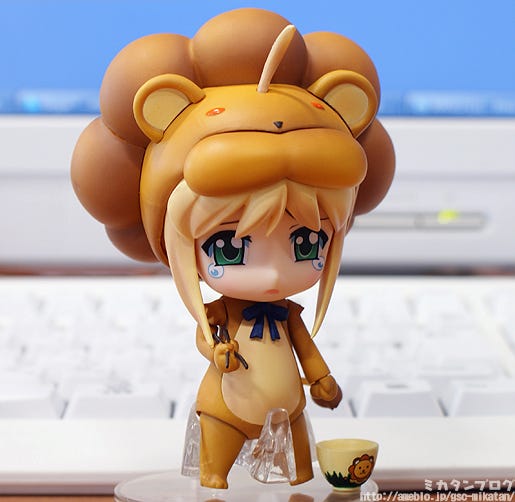 A rice bowl with a little lion on it is also included!

Plus she also comes with chopsticks and a leg of meat to help you pose her in some interesting situations. This lovely version of Saber was sculpted by none other than Hiro-san! He makes both scale figures and Nendoroids so well…!! 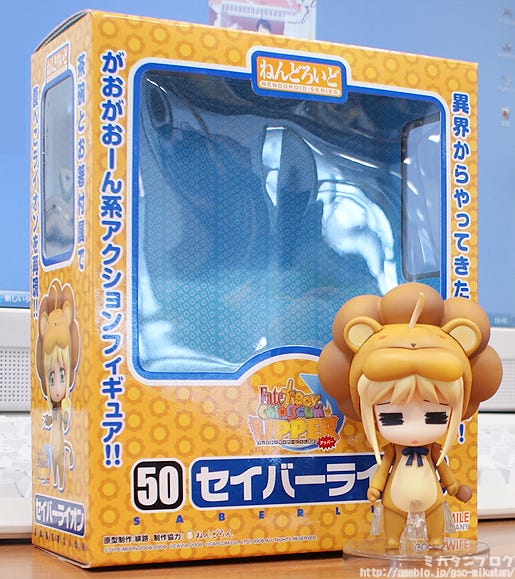 The rerelease version might also be changed to an arm-type stand instead of the one that you see in these photos, but there might be some problems that arise in manufacturing so we’ll have to see! As soon as there is a definite answer I’ll let you know!

Nendoroid Saber Lion will be available in November!

She is also available at all of our partner shops right now! 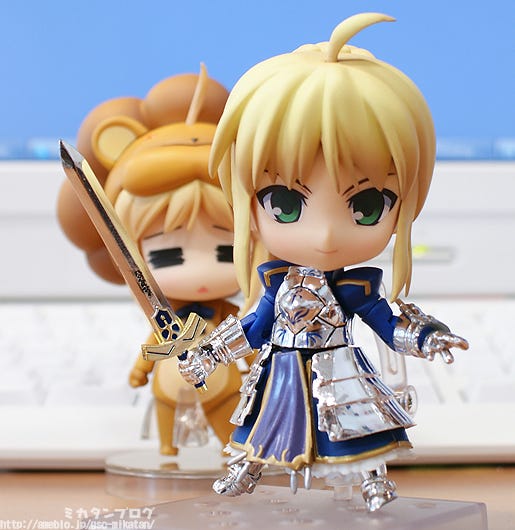 This isn’t a rerelease, but instead a metallic version of the previously released Nendoroid Saber: Super Movable Edition. It’s a special release to commemorate TYPE-MOON’s 10th anniversary! Her armor and sword are so shiny! 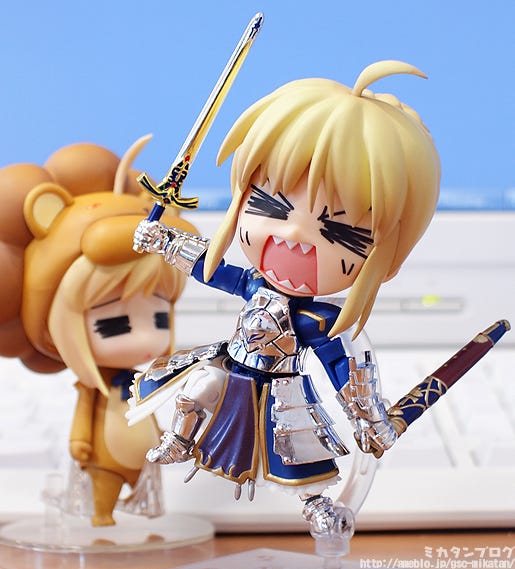 Excalibur and Caliburn are both included for Saber to swing around! She also has this lovely tantrum face that has so much energy about it – I love using it! :P 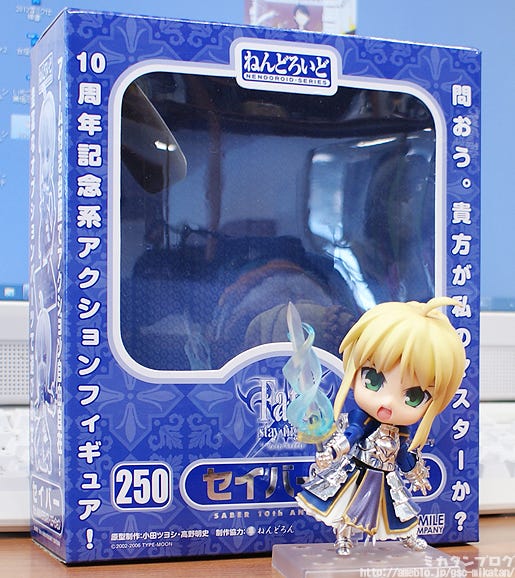 Nendoroid Saber : 10th ANNIVERSARY Edition is up for preorder at the Good Smile Online Shop!

She isn’t available at our partner shops, so be careful not to miss out on her! 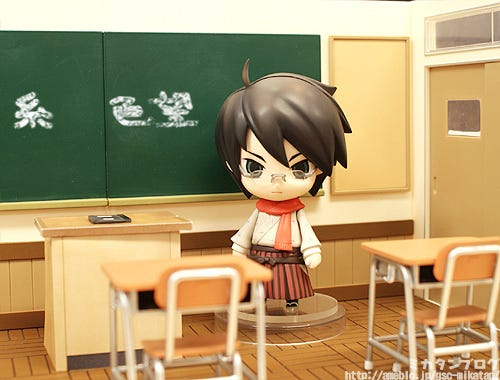 Itoshiki-sensei was also placed very high in the rerelease polls, and his rerelease is now confirmed!! Yay! You can also use Phat! company’s playsets to recreate his classes like this!

He will be up for preorder shortly!

Keep your eyes on the Good Smile website for more information! 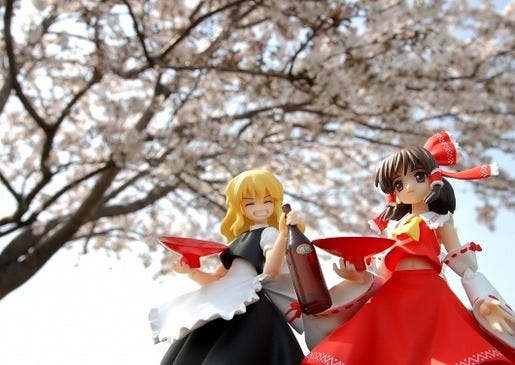 The figma Touhou series! Great figures along with a load of extras to play with! Both Marisa and Reimu are going to be available once again! Ooh, just look at Reimu’s cute little belly button in that photo!

That’s to their large skirts its really easy to put them in great poses very easily, so I highly recommend these two to any new figma collectors as well! Don’t miss out again!

figma Reimu is available for preorder now!
figma Marisa will be re-announced soon! 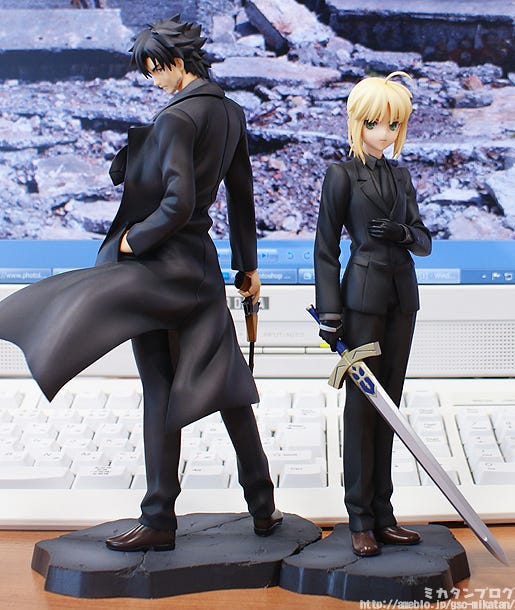 These two were released in 2008 by Max Factory and are going to be refined and rereleased with modifications to the expressions! 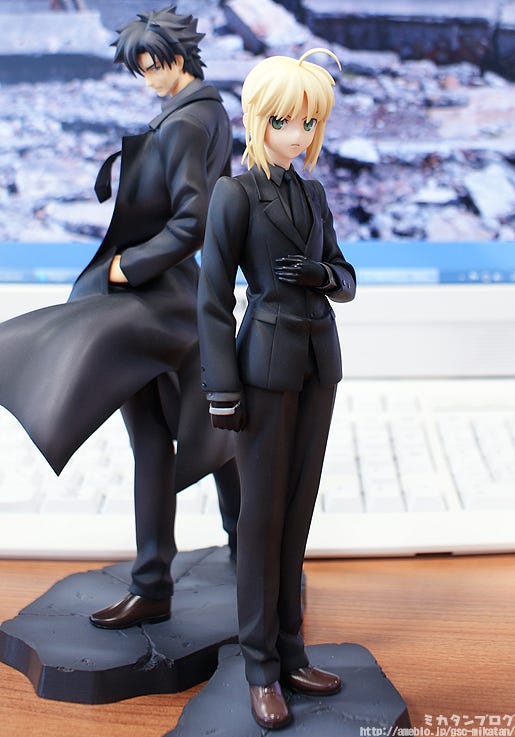 Saber has a replaceable hand part!

You can choose to either display her with Excalibur or without it. I love having small little options like this! 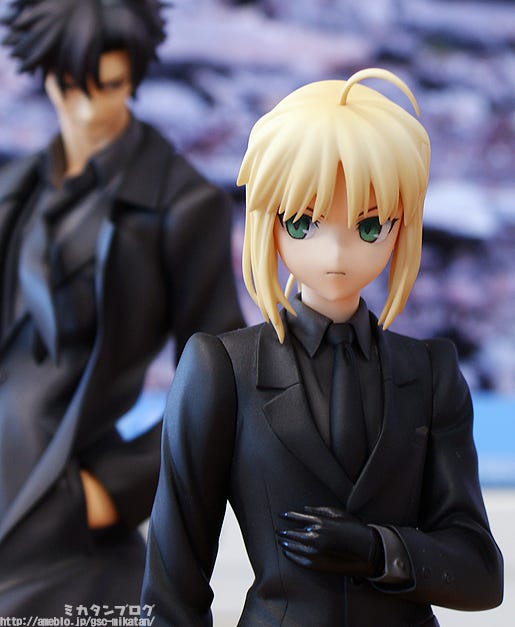 A very suiting expression to the Zero version of Saber, wearing her black suit from the series! I can just hear Ayako Kawasumi’s lovely voice saying “Madam!” when I see this figure.

Kiritsugu has his Thompson Contender!

It wouldn’t be a Kiritsugu figure without his beloved gun! This was made from Batayan from Max Factory – they are some really impressive figures! 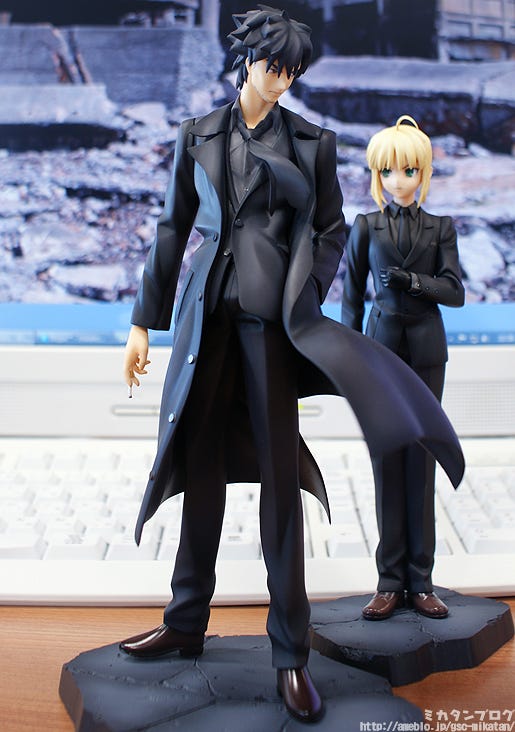 Or have him hold a cigarette instead!

With just a quick switch of his hand the pose seems to change from a combat scene to a much more relaxed scene! I’m really not sure which way I would want to display him!

What a wonderful pose!! Those dull eyes with those lovely cheekbones and stubbly beard are all so wonderful!

Any Kiritsugu fan should enjoy this figure, but even just as a really awesome looking male figure he is great!

Kiritsugu Emiya/Zero and Saber/Zero will also be re-announced shortly on the GSC site! 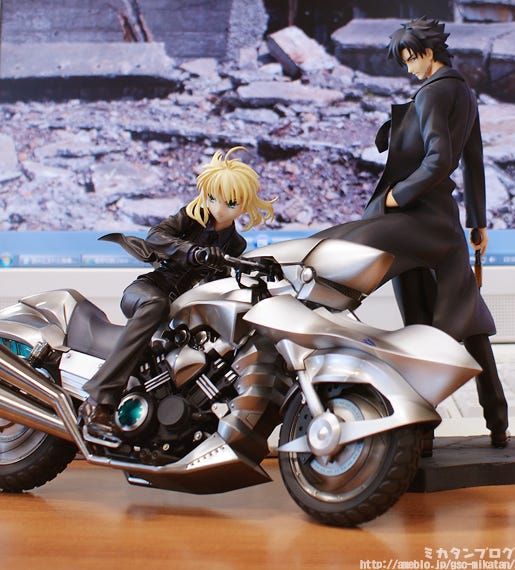 They are both 1/8th scale, so they look perfect displayed together!

… lots of products for you to grab if you missed out on them!

These are all going on sale again as a part of GSC’s 10th anniversary, so I hope those who missed out will be able to grab them this time around!