The sales team is super busy! 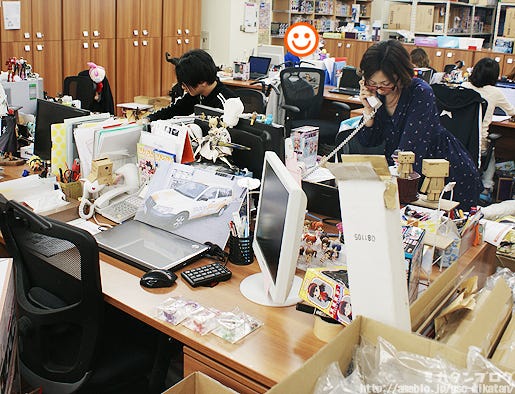 When and which stores they are stopping by are listed at the end of this blog post! 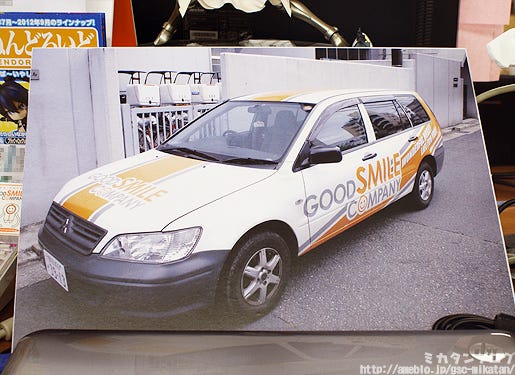 They will be traveling in this car!

I can’t believe they’re going by car! This is going to one long and harsh journey for the sales team! ^^;

The two who are going on the trip are Nagaizumi and one of the new recruits – Murakami! 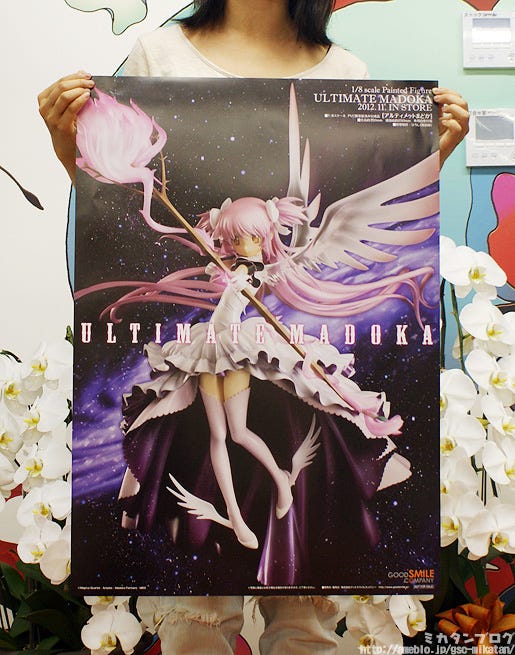 The main focus of the campaign is of course to display Ultimate Madoka!  (*ﾟ∀ﾟ)ﾉ

Posters like this one will be given out at Hobby Shops – a lovely picture of Ultimate Madoka with a spacey background. I’m sure there are lots that want to get their hands on it… 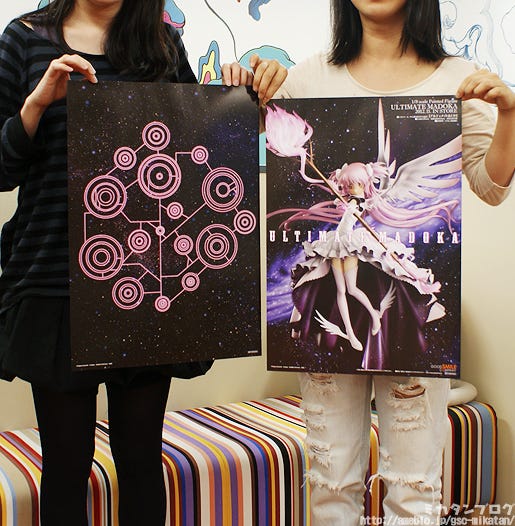 You’ll get one of these double-sided B3 posters!

The front is the Madoka figure with the universe background and the reverse side is a background for you to display behind your Ultimate Madoka! Awesome! 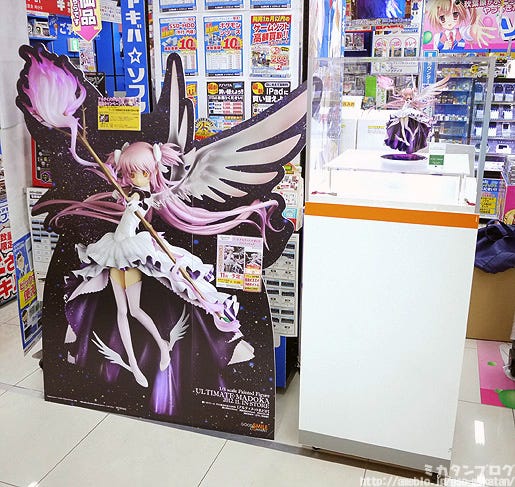 Let’s take a look at the stores!

The first day was at Ibaraki – Akiba Sofmap Mito!

As you can see there is a lovely big cardboard stand for everyone to see! Plus even though the photo was taken quite far from the figure, she still has an amazing presence! 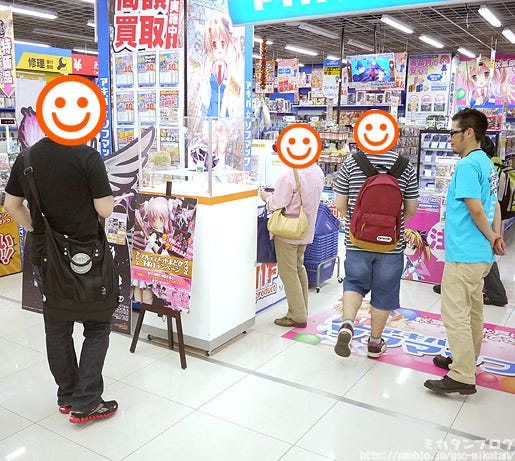 The customers have arrived!

The first day was a weekday, so I was worried that nobody was going to be there! A big thanks to everyone who stopped by to see Madoka! 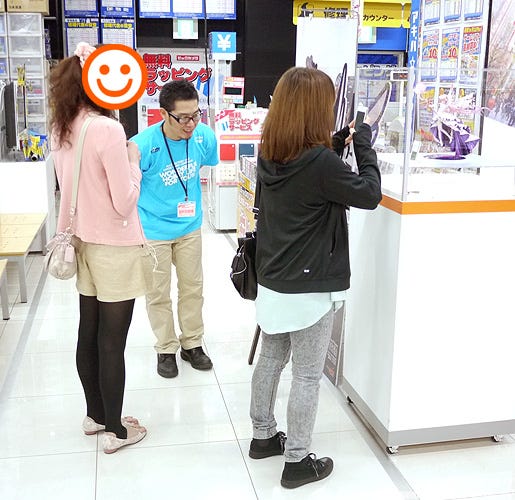 Nagaizumi is the one in the turquoise shirt!

Excellent! He seems to be treating the girls with the utmost respect! If there is anything you want to know, don’t hesitate to ask him! 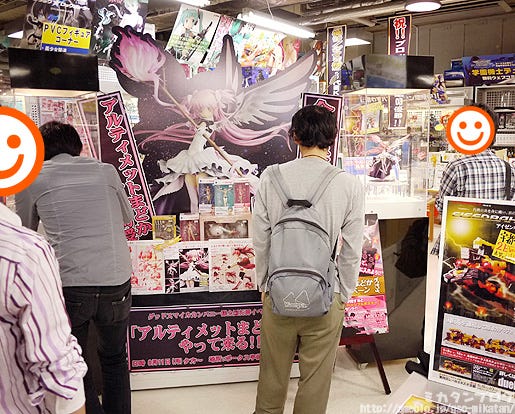 Wait? From Ibaraki to Tochigi…?

They moved from Akiba Sofmap Mito to the Volks showroom on the same day! That’s quite some distance to cover in just one day! 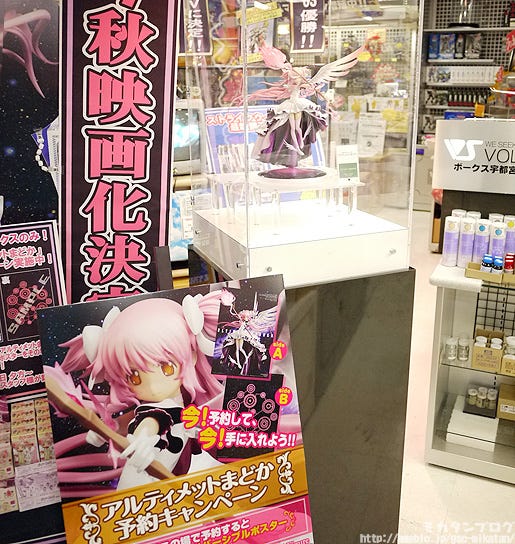 As I mentioned before, the sales team will be giving out the B3 poster as a present to everyone who preorders while they are at the store! 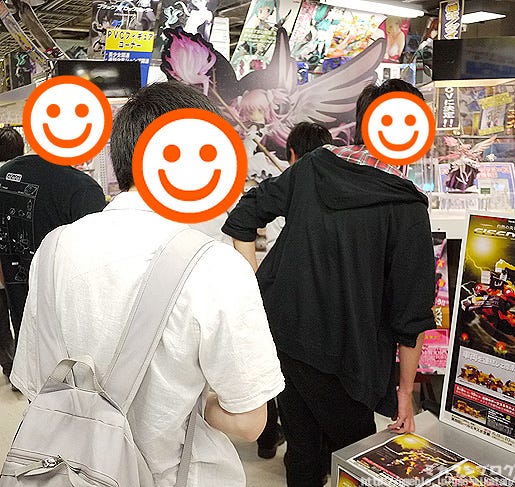 Madoka is just as popular in Utsunomiya!

The prototype hasn’t yet been out of the Chiba/Tokyo area, so it’s great that everyone else can finally get a chance to see it! It’s much better to see it for yourself than try and figure out the size from images all the time. ^^; 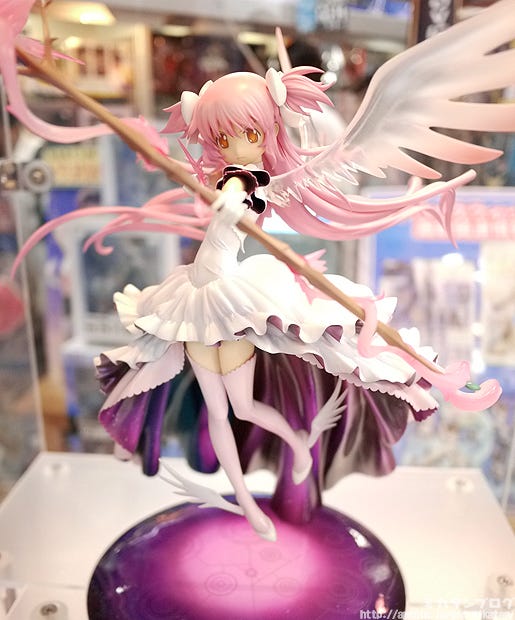 A picture of Madoka from above, giving us a nice look at the pedestal as well! 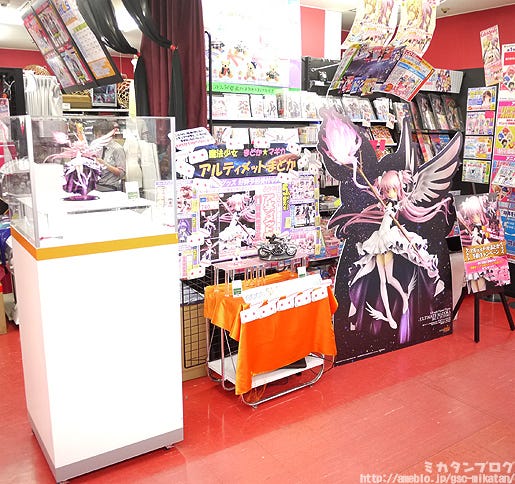 The next day: animate Miyagi in Sendai!

Ooh! We got lots of space to show her off once again! It makes for a very colorful area that nobody would want to miss out on! 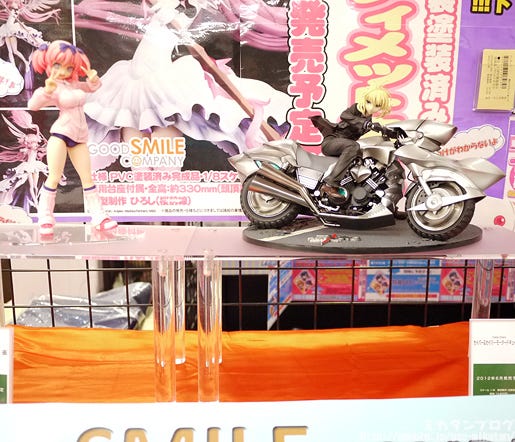 Along with Ultimate Madoka, Phat Company’s Hibari and the soon to be released Saber & Saber Motored Cuirassier were also on display!

I’m still amazed at the quality that Saber & Saber Motored Cuirassier – this wasn’t the prototype but a early release sample! If you’re not sure if you want to order her, be sure to go take a look at the display and see her for yourself! 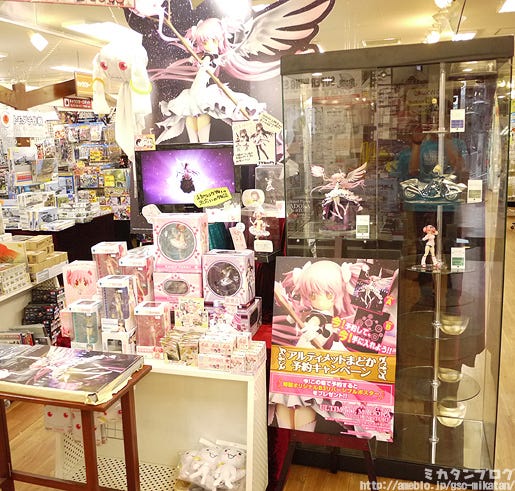 Next up: Volks Sendai Showroom in Miyagi!

Wow! The display is enormous here! We also have GSC’s 1/8th scale Madoka on display!! Ultimate Madoka is the same 1/8th scale as the previously released Madoka series, so they’ll look great displayed together! 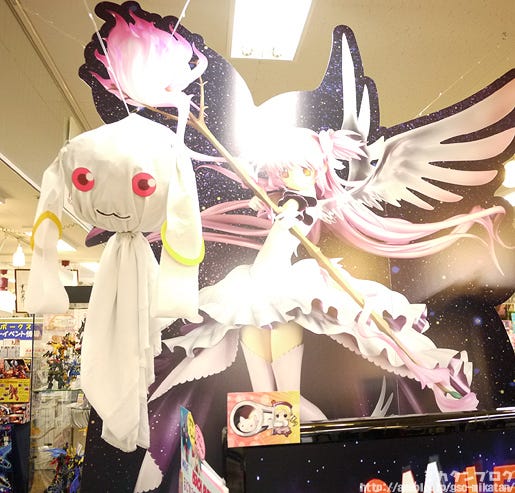 Not to mention he is huge!! xD If he was real I think I’d have to make a contract…! 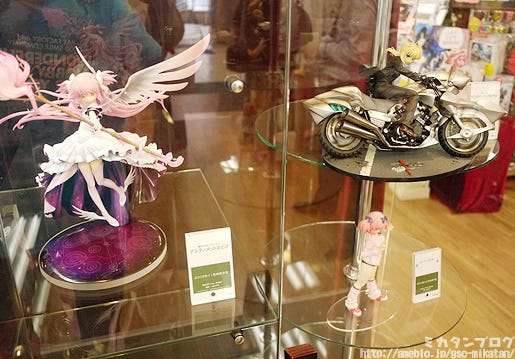 Uuko’s circular display stands really give a classy feeling to the display! I want them for my Nendoroids!

And I have to say it again… Madoka is really big… :P

“Eh?! You’re just staying in the car?!
How are you going to send me text for the blog?

They’ve only just started, it’s definitely going to be quite a tough journey! Just make sure you stay healthy, and be careful when driving!

For the next three weeks the 4700km Japan Journey will continue!  (`･ω･´)

This is the schedule, so if you have the time when they are nearby then come by for a visit!

They will be tweeting where they are and when they arrive! On the 23rd/24th at Fukuoka, I might also stop by to see how things are going – feel free to come and have a chat! It’ll be my first time in Hakata, so I’m actually looking forward to it!